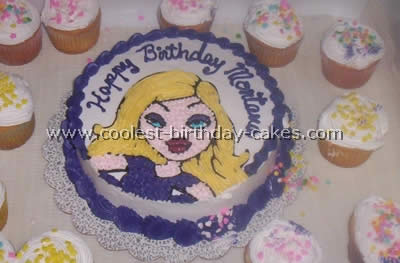 My niece, Montana, wanted a Bratz cake for her birthday and her mom wanted cupcakes for the girls who would be spending the night for the party. So I made a one layer 8″ round cake and decorated it with a Bratz and made cupcakes with colorful sprinkles to go around it. It was a big hit with all the girls. 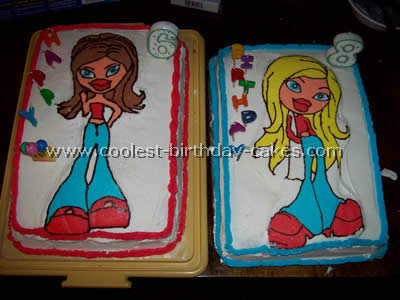 These cakes were my first attempt at cake decorating EVER! My kids asked for Bratz cakes this year and while searching the internet for ideas I came across this site for a Batz cake.

That is where I heard about a frozen butter cream transfer for the first time. I’ve always wanted to try my hand and decorating cakes but unfortunately my hand isn’t so good at drawing. The FBC transfer makes it so easy and so possible to make great cakes. Everyone at their party loved the cakes and a few of them have asked me to make cakes for their kids parties as well.

The butter cream recipe I used is: 1 stick unsalted butter, 1/2 cup Crisco, 1/2 tsp vanilla,1/2 tsp butter flavoring, 4 cups sifted confectioner sugar, 2 tbsp milk Cream together the butter and Crisco, add vanilla and butter flavoring. Add approximately half the sugar and mix well. Add the remaining sugar and mix well. Mixture will be thick dry and lumpy. Add milk and mix until creamy. Keep covered with a damp cloth while not using it.

You could probably find a detailed explanation of the FBC transfer online but to give you and idea here’s a short explanation. First you find a picture such as a coloring page that you want your cake decoration to be. Tape it down to a hard movable surface that can fit in your freezer. Cover with a piece of wax paper. Outline the picture using any kind of store bought icing. Then you fill in with your colored butter cream icing. Put in freezer for 10 minutes. Take it out and cover it with the same color icing that your cake is going to be. I found that at least 1/4 inch thick was easy to work with. You then freeze again for at least 2 hours.

You then take it from freezer, put the icing side down on cake and peel the wax paper off. Work quickly because it starts melting very fast.

*TIPS* Instead of using the decorating tips to apply icing I found it easier to use a baby bottle liner bag and just cut a small piece of a corner off. In order to limit the “raised appearance” of the thickness of the transfer I found that after you freeze it for 10 minutes and are adding the icing on top you go over the edge of the outline and add extra icing to the sides of the transfer. Then when you put it on the cake as it melts you can smooth the edges to blend with the cake icing. Put your cake icing on right before you are ready to put your transfer on. The icing will still be at its softest and easier to smooth and blend the transfer. 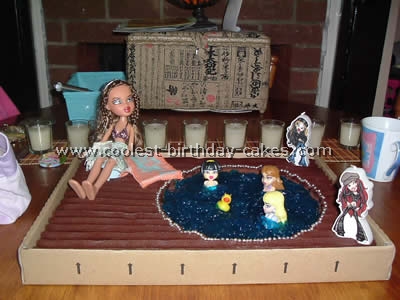 I used a Sarah Lee base for this Bratz cake. I made it flat with chocolate topping. The idea was just last minute. I also had some Pez toppers lying about. 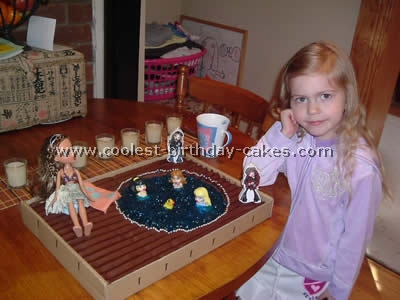 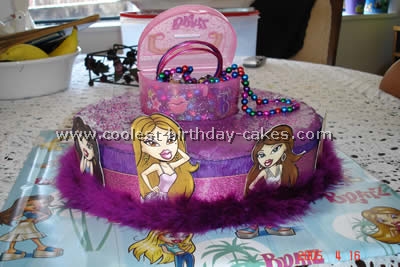 Being on a budget I was unable to make my daughter the Bratz cake she dreamed of so using cheaper decorations and some creativity came up with this cake which she loved.

I used a couple of Betty Crocker cake mixes for this cake as they are without fail. I’m not a great baker. Icing I made using icing sugar, butter and water with blue and red food coloring to get that perfect Bratz purple color. Purple cake glitter was sprinkled after icing had dried.

WAIT FOR ICING TO DRY then add Bratz dolls which we cut from a Bratz doll box. Ribbon, fluff, jewelry and box (which I also put Bratz stickers on) were bought at a local emporium. Cake tray was covered with Bratz wrapping paper. 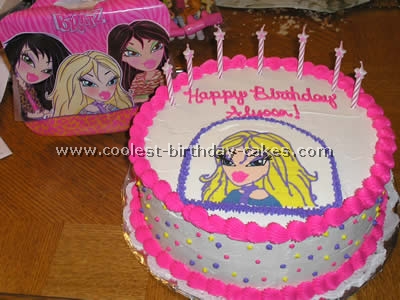 For this Bratz cake I stacked two round white cakes and frosted it with buttercream icing. For the picture I traced one of the Bratz’s using a favor bag and then I flipped the image on the cake. I used the star candles to add to the decoration. 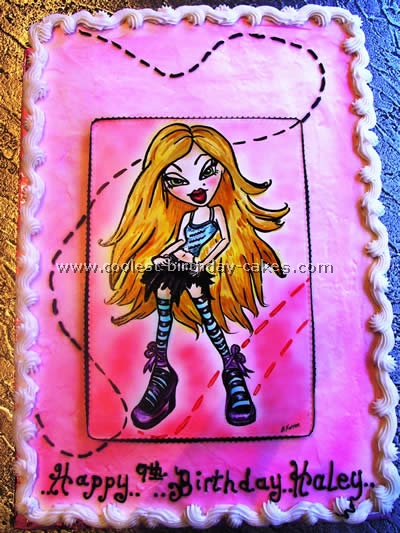 The picture is hand painted on edible image paper. I sprayed it with a glaze then you peel it off and you can frame it. It’s something to keep. The Bratz cake is buttercream icing. 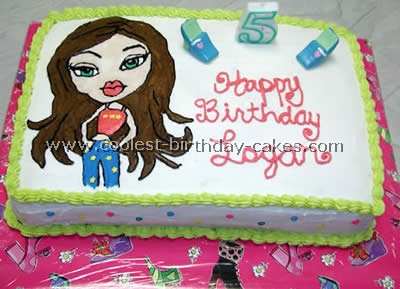 I made this Bratz cake for my niece’s 5th birthday party. I also used the transfer method previously mentioned by Christy M. (freezing as you go). Unfortunately when I peeled back the wax paper a lot of my transfer stayed on the paper. I think I must not have worked quickly enough. I had to go back and fill in the areas that didn’t stick.

I used the Wilton frosting recipe and for the hair I mixed in some canned chocolate icing. I had trouble getting a dark brown using strictly food coloring.

I used candy buttons for the polka dots around the edge and sprinkles for decorations on the pants and shirt. I found the “shoe” candles at Party City and I wrapped the cake board with wrapping paper that had shoes and purses on it.

The girls loved this Bratz cake! 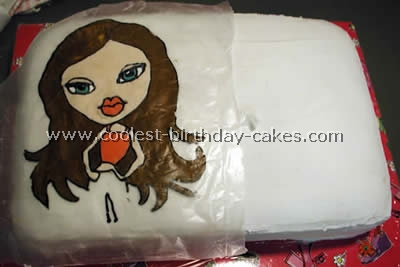 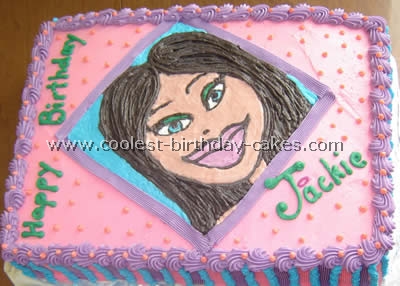 For this Bratz cake I outlined (freehanded) a Bratz girl’s face onto the cake. I then filled it in with all kinds of colored buttercream. 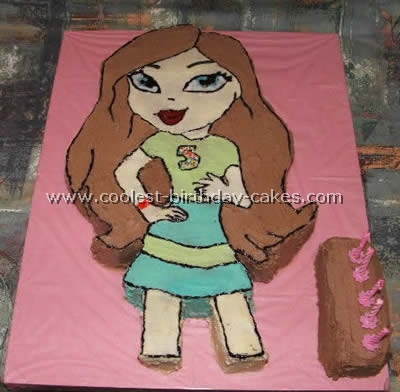 For this Bratz cake I photo copied and enlarged a colouring picture and then traced it onto baking paper. I cooked two rectangle butter cakes, two packets per each cake (a total of 4 packets were used). I cut one side of each cake and placed them together so they were flush with each other. Pinning the baking paper picture onto the cakes with toothpicks, I cut around the outside of the cake to get my Bratz figure.

I photo copied about six copies of the picture and made templates for everything – hair, eyes, mouth, arms, clothes; the lot. Starting with the hair and body and pinning it onto the Bratz cake leaving the face shape I pinned the eyes and mouth in place and then iced the face over the top of the paper.

I used Frosting for the icing: which is 125g soft butter, 11/2 cups (240g) icing sugar mixture, 2 tablespoons milk approx. I doubled the mixture, beat butter until light in colour then add icing sugar and milk gradually. Separate into different bowls so you can colour for each section.

You then take off the eyes and mouth and detail them. I gradually moved down the body leaving the hair till last. At some stages I had to cover what I had already iced with a template and then just touched it up when I took it off.

Finish it off by outlining the lot with black icing gel. I again used a toothpick and spread it thinly. It was time consuming but was the first time I have ever made a cake with detail like this, but it was very satisfying when finished. 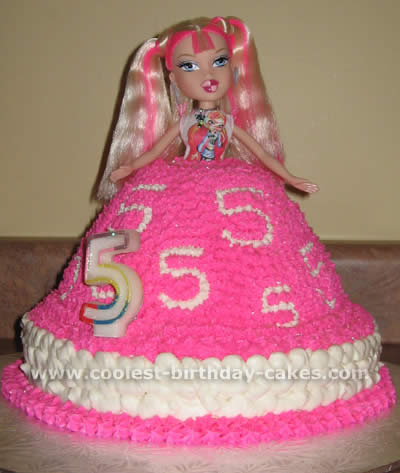 For this Bratz cake, I used the Wilton cake pan for the dress and a 9″ round pan for the base. I made room on the top to put in the Bratz doll. I frosted with pink and white frosting. 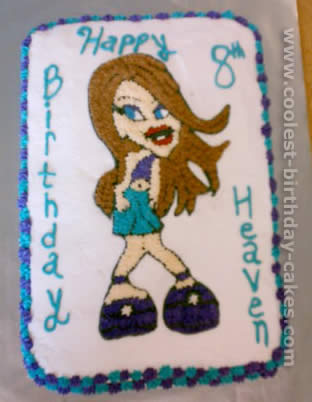 This Bratz cake is a sheet cake iced in white buttercream. Image is from Bratz partyear, blown up on a photocopier. I then traced onto wax paper using a sharpie pen, after which I re-traced using black piping gel and then transferred onto cake (after icing had set).

After that I used no. 3 tip to outline everything in black, then piped in tip 16 stars. Added luster dust for lip highlights and eye shadow. Frame around face is rainbow sour fruit leather bought at a mall specialty candy shop.

Cake by Ashley B., Barrackville, WV 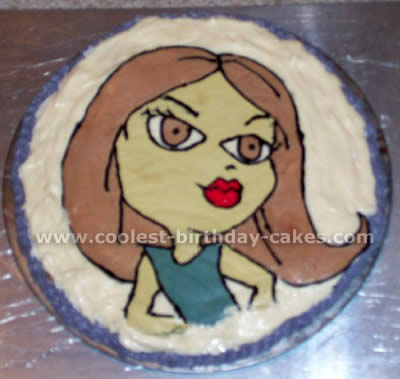 I made this cookie Bratz cake for my niece’s 8th birthday party. It’s a Bratz girl but I’m not sure which one. She gave me the picture from a coloring book she had.

I used the buttercream transfer method mentioned earlier by someone else. After freezing, the icing melts very quickly so you do have to work fast. I made my own buttercream icing using the Wilton’s recipe on their website. I wanted to add flowers but I ran out of room.

I iced the cookie a little before I put the transfer on. Then I filled in after I placed it on the cookie. I did the border in purple icing and wrote “Happy Birthday, Brittany” around her head in pink icing. The picture was so big; I barely had room to do that.

Overall, I think it turned out nice. I’m sure I’ll do that technique again. It really wasn’t hard but it took a while doing the transfer and letting it freeze and filling in etc. Plus, I had to chase a 22 month-old. So it took me longer to do. This Bratz cake was a hit with Bratz loving 7 and 8 year old girls!!