Cake by Kristyna C., Brampton, ON 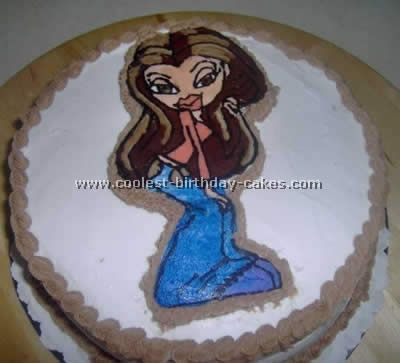 This is a Bratz birthday cake that I prepared for a friend of mine whose daughter was having a Bratz themed birthday! I found a picture on the internet and drew it onto waxed paper and then began to fill in the picture with icing. I then froze my design and continued to bake and ice the cake with a flat top and sides.

When the image was frozen solid I carefully peeled off the waxed paper to reveal the underside of a perfectly decorated plaque of icing that I could then place directly on the cake and finished it off with some trim! 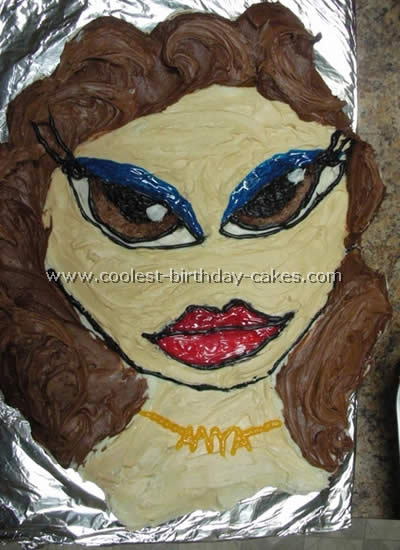 I used two Betty Crocker cake mixes to back the cupcakes. There were about 45 cup cakes. In December I had made a cupcake Spiderman cake after seeing something similar in a grocery store bakery. My daughter Anya wanted me to modify the cake to be a Bratz birthday cake. I positioned the cupcakes similar to a picture I had of a Bratz girl.

I frosted the entire cake with cream cheese Betty Crocker frosting. I drew the face shape I wanted with a tooth pick and then freehand drew in all the features with the tooth pick and went over it with Better Crocker easy flow decorator icing in black. After all that was done I started filling in the colors. I used Wilton’s Ivory icing color for the skin color and Wilton’s Sparkle gel for the eye shadow, lips and the necklace. Chocolate frosting was used for the hair and eyes and I mixed white with some of the chocolate for highlights.

With the extra cupcakes we frosted with white frosting added stars with the Sparkle Gel and piped on a letter on each cupcake to spell “happy birthday”. I used about four cups of frosting total. I took the picture before I put on the eyebrows and the mole. She really needed some “blush” too but I ran out of time. 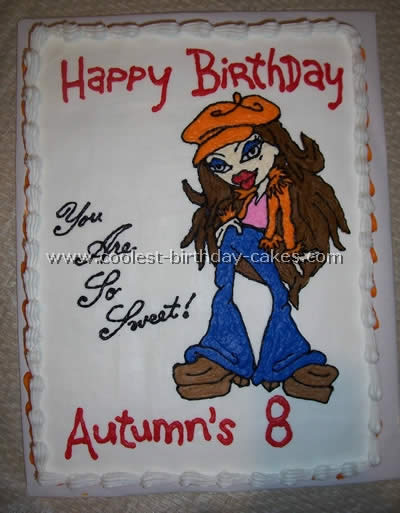 I made this Bratz birthday cake for my neighbor’s granddaughter. I traced the photo using wax paper. I always use butter cream icing. 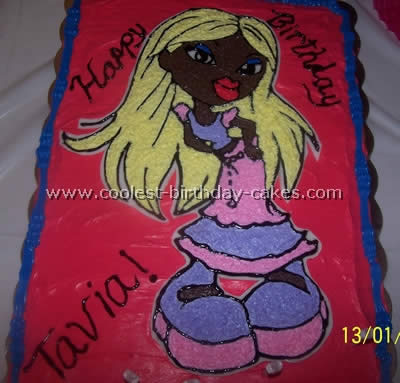 For my daughter’s fifth birthday she wanted a Bratz birthday cake. After searching online for coloring pages I finally found one that would be fairly easy. I printed it out and blew it up at Kinko’s. I transferred the picture onto wax paper then I rolled out the fondant and transferred the picture onto that. I outlined the Bratz with some icing., I let it sit in the fridge overnight so it would harden. The next morning I started filling in the picture. I didn’t have a small enough star tip at the time so I wound up using a toothpick. I don’t suggest using that, it takes a really long time. As I was finishing up with that the cake was in the process of baking. Once cooled, I frosted it and carefully put the Bratz on the cake.

All together it took me about six hours in total to finish this Bratz birthday cake. My daughter loved it, so did everyone else. I am now the official cake maker in the family. 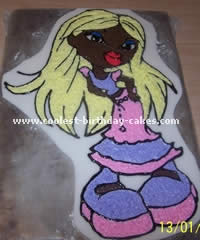