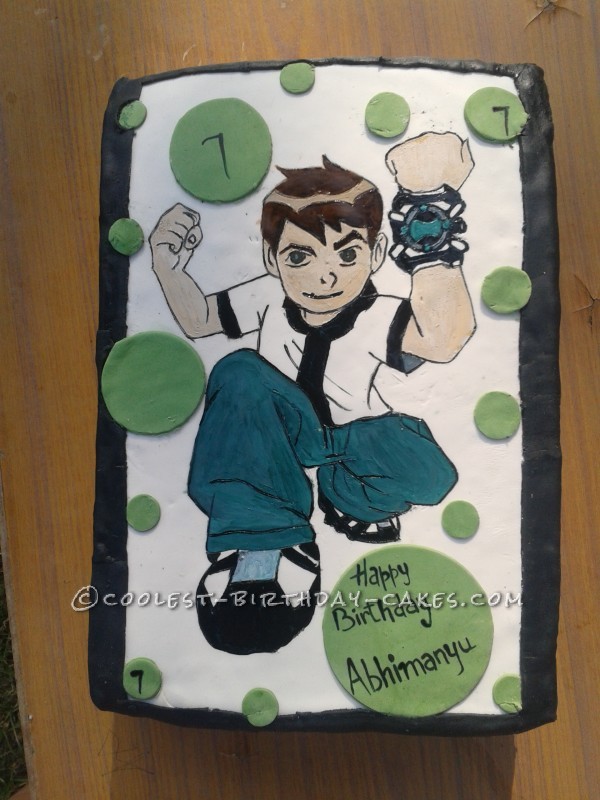 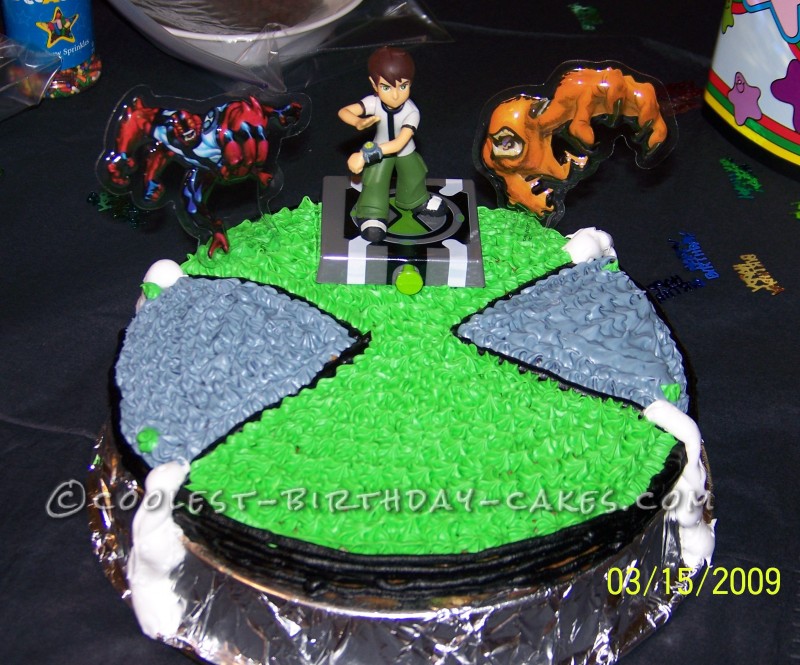 My son loves the show Ben 10, so for his 6th birthday I wanted to replicate the wrist band toy that he always wears.  I used this as a model to make my Ben 10 birthday cake.  I also bought a cake topper to add a little decoration to it.  When you pushed a button … Read more 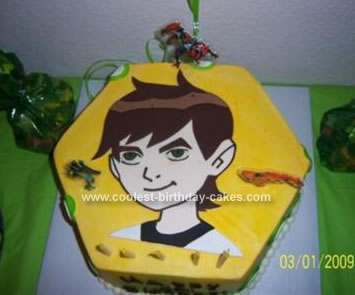 I made this Ben 10 Birthday Cake for my grandson Isaiah 5th birthday back in March. The face is made out of gum paste cut outs. The rest is butter cream air brushed yellow first and blue over it. He loved it. 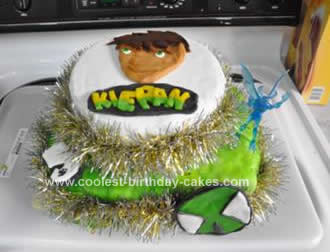 This Ben10 Birthday Cake Design was the first time I had used royal icing/marzipan and I think I did OK. I really enjoyed the creativity but it was my first time and hard! The cake is a mud cake from the internet – search white chocolate mudcake and should be the first that comes up. … Read more 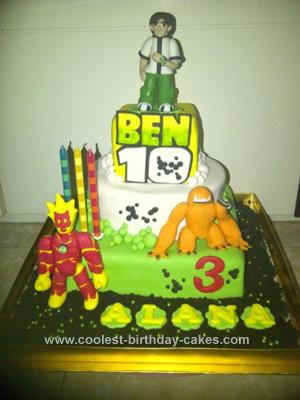 This Ben 10 and aliens birthday cake is triple chocolate cake with minty butter cream that I made for Alana’s 3rd birthday. She’s an adorable girl who loves boy stuffs. Alana’s mom is one of my best friend’s at the office. I made the cake simple but rich in detail. i wondered how to make … Read more 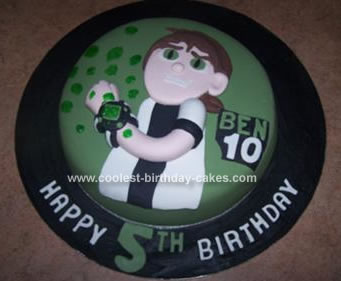 I made this Ben 10 Birthday Cake for a friend’s son in July 09. I got the idea from a web sight. I cooked a 12″ round chocolate mud cake and iced it with ganache. I then covered the cake with green fondant. I used baking paper to copy a picture and then cut the … Read more 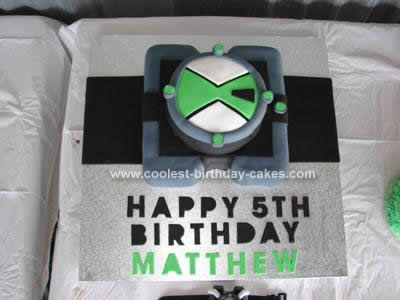 My son is a mad Ben 10 fan so this theme was a no brainer. To be honest I looked everywhere for cake ideas for a Ben 10 Birthday Cake, including this website and anything that included faces to be drawn terrified me so I found a picture of the Omnitrix and went with that. … Read more 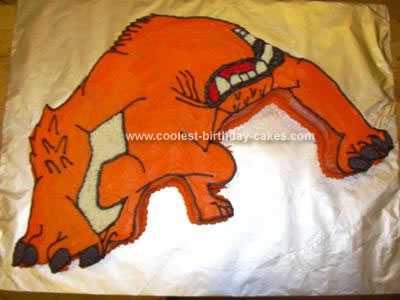 I made this Ben 10 Wildmutt cake for my nephew Hudson’s 4th Birthday. I made two Madeira slab cakes. I froze the cakes after baking as its easier to cut around the shape with a frozen cake as it doesn’t crumble and hence no crumbs in the icing. I found a colouring picture of Wildmutt. … Read more 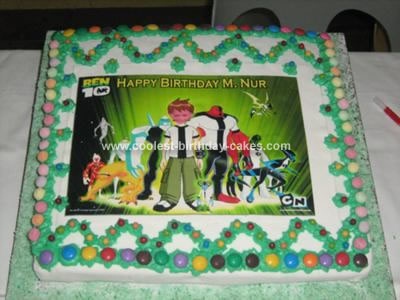 I made a plain sponge or chocolate cake for this Ben 10 Birthday Cake. We then covered it with plastic icing and printed a Ben 10 picture with my son’s face in Ben 10’s face on edible paper. Thereafter just decorating it with icing sugar with green food colouring and smarties, jelly tots and mini … Read more 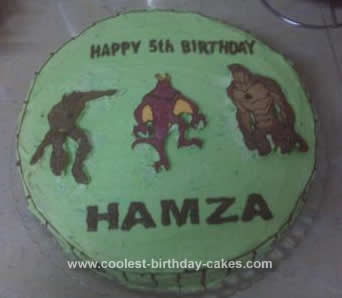 This Homemade Ben10 Cake is my very first time at decorating a fancy birthday cake! And I’ll be honest I’d been researching on what cake types to use and what icing type to use for months before hand on various internet sites. Finally, I got round to settling for what eventually turned out to be … Read more 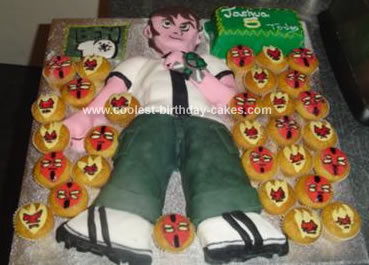 This is my first ever attempt at making a cake which was for my son’s birthday, and he is Ben 10 mad. I wanted a cake which could supply all his school classmates so this is my effort at it. I made a chocolate spongecake cake in 2 square tins. I then halved the sponges … Read more 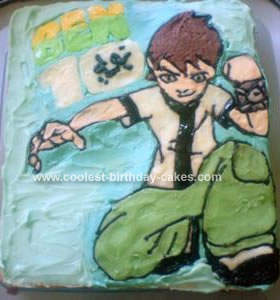 For my friend’s son’s birthday, I made him a Ben 10 birthday cake because it’s his favourite show at the moment. I got a picture of Ben 10 from the internet and printed it in reverse. I then covered it with wax paper and traced the outline in chocolate fudge icing. I then made a … Read more 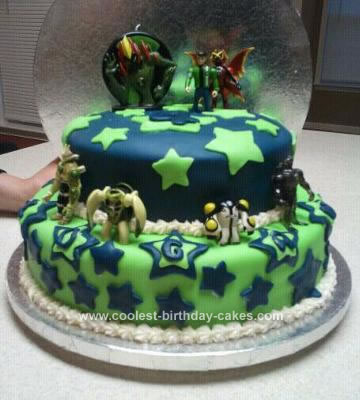 I made this Ben 10 Cake for my stepson’s fourth birthday. He is obsessed with all things “Ben 10″ and I was determined to give him an amazing cake for his themed birthday party. Having never made a decorative cake or worked with fondant before, I was nervous as to how the cake would turn … Read more 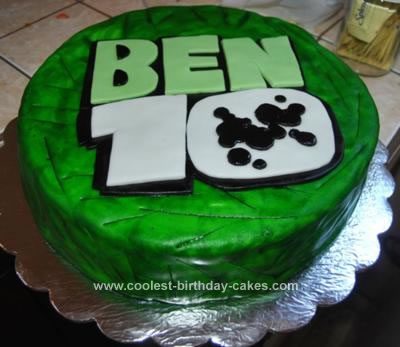 I made this Ben10 Cake for my son’s seventh birthday. He’s a huge Ben 10 fan. I made it from 2 sheet cakes. It took me 4 hours to get all the logo done, it is made of fondant and even though I tried to color the fondant black it always turned gray so I … Read more 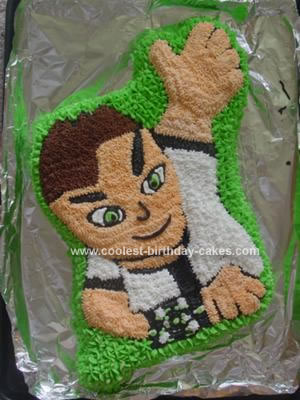 I made this Ben 10 cake for my son’s 7th birthday using the Wilton Spider Man cake pan. I printed out the best picture I could find of Ben then free handed the outline. 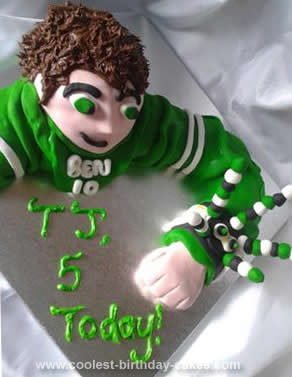 This Ben 10 Cake was made for a friend’s little boy who totally loves Ben 10. He wanted the real Ben 10 to arrive at his party (as he sent him an invitation). So his mum wanted something very lifelike. I decided on this head and shoulders style with his super watch. It turned out … Read more 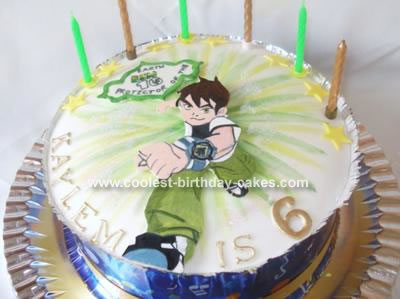 For the Ben 10 cake I made a round, 20cm chocolate fudge cake with real 70% cocoa solids chocolate and layered it with chocolate fudge. The chocolate fudge is made by melting chocolate with cream, cooling it and then adding some homemade vanilla buttercream to it to sweeten and thicken it. There are 4 cake … Read more 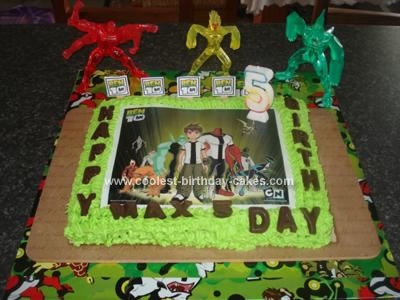 I made this Ben 10 Birthday Cake for my son’s 5th birthday as he loves “Ben 10″. The cake is chocolate. I found an icing image of the “Ben 10″ characters and stuck it on top. I then piped lime green butter cream icing around the picture and placed home made chocolate letters on top … Read more 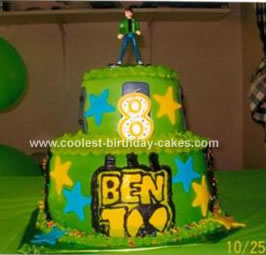 This Ben 10 cake was a request from my son. He’s 8. I am very much a rookie at this stuff though. So it is a chocolate fudge cake made from a box mix. I add almost 8 oz to the cake plus a small amount of corn syrup to make it extra moist and … Read more 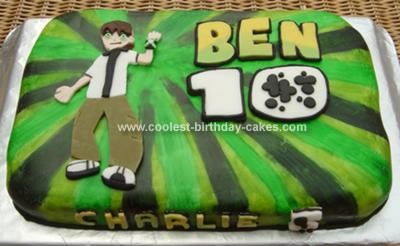 This Ben 10 cake was for a 5 year old’s birthday. I started with a 13 x 9 chocolate cake made from scratch. I then covered it with chocolate buttercream icing and froze it to firm up. I then covered it in rolled out white fondant (sugarpaste). I downloaded a Ben 10 image from the … Read more 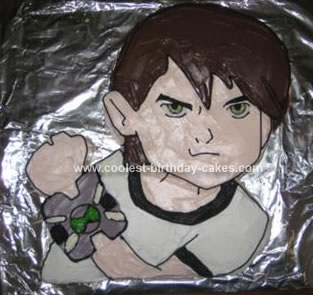 I made this Ben 10 Birthday cake for my nephew who is a Ben 10 Fan. I started with a piece of paper the size of my pan ( a Wilton sheet cake) and I drew my Ben 10 character. I then baked my cake using three cake mixes to make a thicker cake. I … Read more

I made this Ben 10 And Wildmutt Birthday Cake for my grandson, a Ben 10 & Wildmutt fan. The base was a chocolate cake covered with butter icing. I copied pictures from the Internet and made separate templates for the body, hair, shirt and watch. I traced onto fondant, cut them out, then layered them … Read more 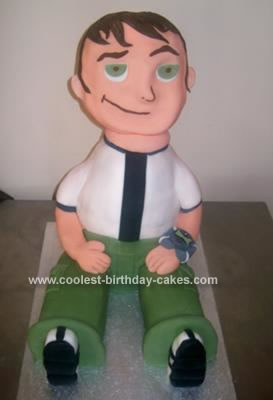 I made this sitting up 3D Ben 10 Cake for my great nephew who is a huge Ben 10 fan. I used a large basin cake for the body, a small basin cake for the head, the arms are fondant and the legs are Swiss roll cake, very difficult to transport so I inserted a … Read more 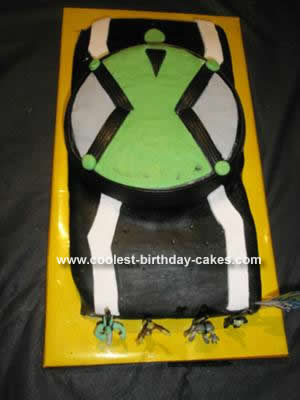 My son’s current obsession is Ben 10 so with that as the theme was inspired by the many cakes on this site to create the Ben 10 Omintrex Birthday Cake watch as his cake for his 4th Birthday. I made a sheet cake and a round cake which placed on top (trimmed the sheet cake … Read more