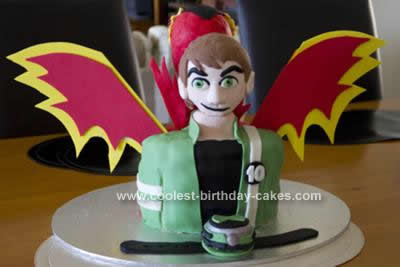 This Homemade Ben 10 Birthday Cake was made for a 6 year old who wanted a Ben 10 cake to have at his Superheroes Party. Ben 10 has lots of complex characters (that frankly I had no clue about!), so he gave me a run down of the different types of characters, and what his favourites were.

I decided to do a double sided cake, with a Ben 10 bust on one side, and one of the aliens he turns into on the other. In this case, it was Ultimate Big Chill. The cake is 4 20cm round butter cakes stacked on top of each other, sandwiched with raspberry flavoured cream cheese frosting. I then freehand carved the busts from the neck down to almost waist height, as if the characters were standing back to back (pretty basic shape). This was dirty iced with buttercream frosting and left to crust.

The heads were made out of egg shaped polystyrene balls mounted on dowels. The Ben10 polystyrene was carved down to a head shape. Each ball was dirty iced with buttercream and allowed to crust. Both the heads and bust were then covered in Marshmallow Fondant.

The wings were originally made from fondant, but a last minute disaster with one breaking meant a backup solution using coloured foam sheets glued to skewers. 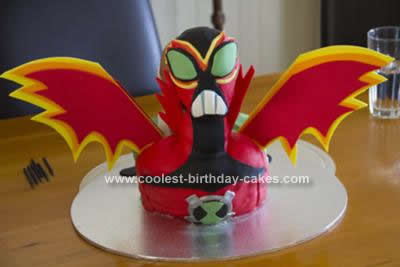