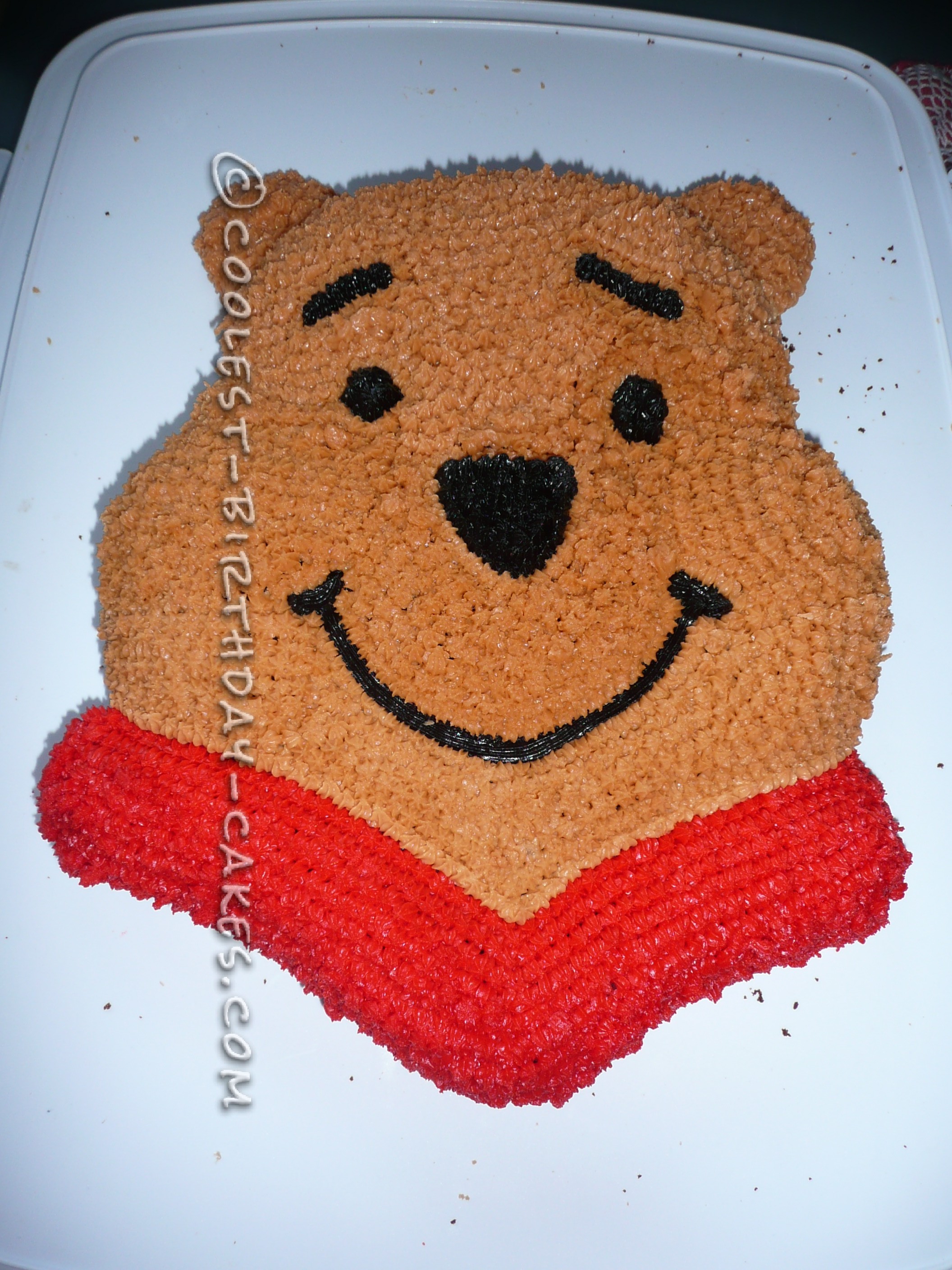 My son turned one this week. I decided to have a Winnie the Pooh theme. I baked the chocolate cake from scratch cause that is how I like it. I was scared that the cake would get stuck in the pan or that it would break but it turned out awesome. Decorating time was very … Read more 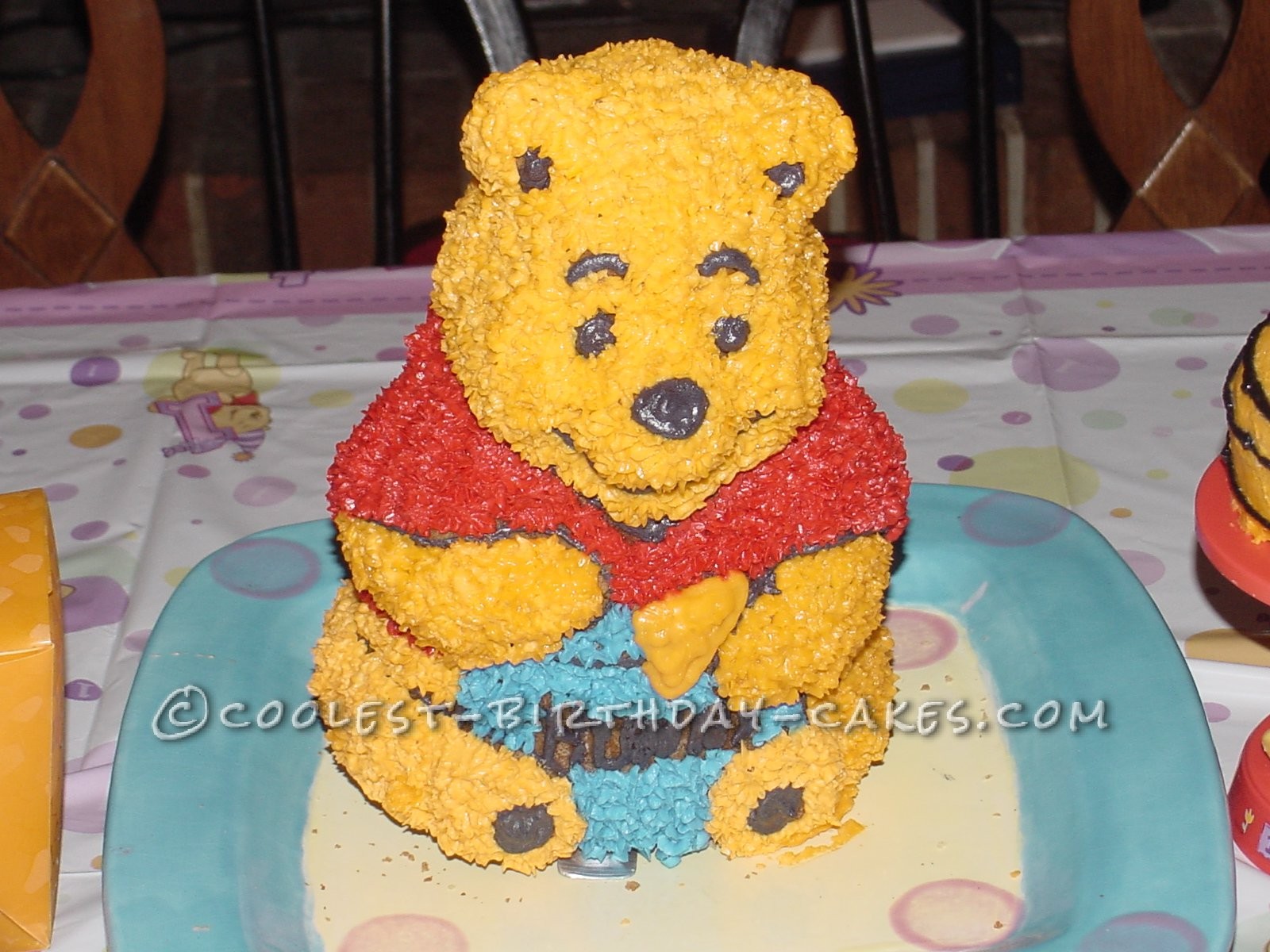 For my daughter’s 1st birthday party, I made a 3D Winnie the Pooh cake. I searched high and low on Ebay for a 3D cake pan for months before her party. The pans were so expensive that I almost decided to change her cake design. However, I finally found a retired Wilton 3D Pooh cake … Read more 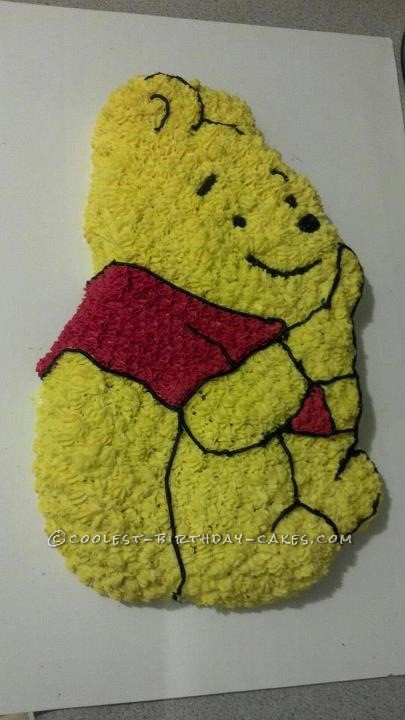 This was my husband’s cousin’s baby shower cake.  She had a Winnie the Pooh theme so I used the old Winnie the Pooh Wilton cake pan to make it. I dyed butter cream different colors, then just dotted it on the cake then outlined it in black frosting. It was a pretty simple, easy cake. You just need the … Read more 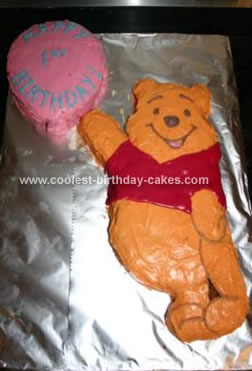 This was my first attempt at making a cake. It was a Winnie the Pooh 1st Birthday cake for my oldest daughter’s 1st birthday. I found a picture of Winnie the Pooh online that I liked and enlarged it on the photocopier where I work. I made a carrot cake and then cut the Winnie … Read more 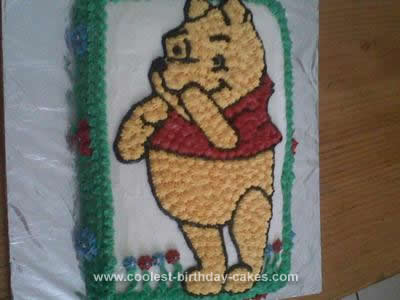 I made this Pooh Bear Cake for a 1st birthday. The child loves Pooh bear so we set the party theme as Pooh. The first thing I did was bake the cake. I made chocolate cake because kids love this. I made 2 cakes(13x9inch). Allow the cake to cool and refrigerate it makes it firm … Read more 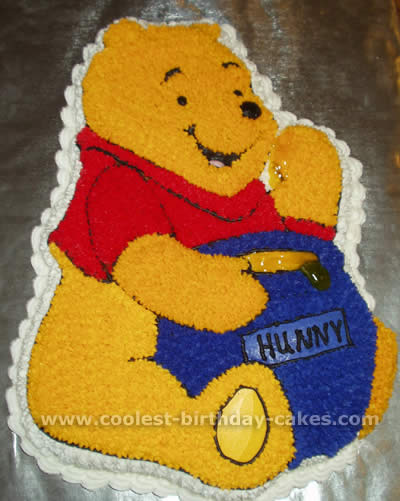 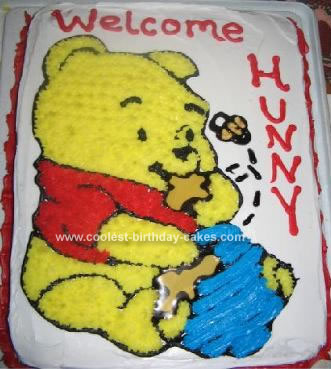 I made this Pooh baby shower cake for my husband’s niece’s baby shower. Her theme was Winnie the Pooh. I found a picture of Winnie the Pooh that I liked and made it large enough (on a copier) to fit on a 9×13 cake. I cut out the picture of Pooh to use for later. … Read more 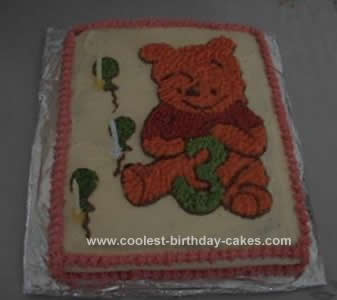 This Winnie the Pooh Birthday Cake Design was made two years ago for my first daughter who was going to celebrate her birthday in school. It was an innocent request to have a Winnie Pooh cake. I said yes but didn’t know how to make it possible. I can draw, that was an advantage. I … Read more 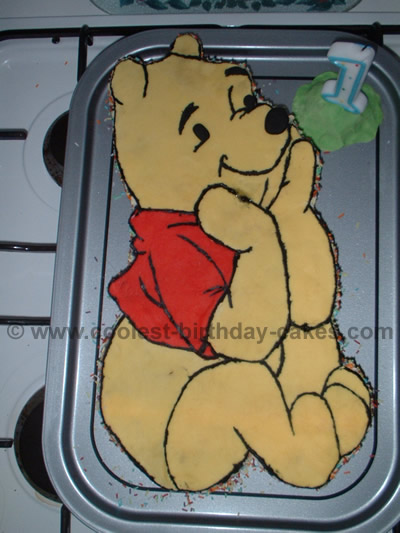 I made a 6 egg vanilla Victoria sponge and mixed through white and milk chocolate buttons. I chose a Victoria sponge because I thought it would be easier to cut as its not so crumbly. I left the cake overnight to settle. I drew a Winnie the Pooh picture and cut around the cake using … Read more 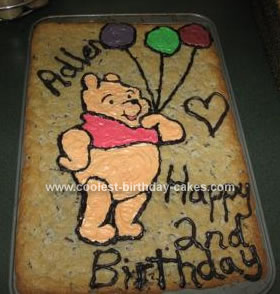 My daughter loves Pooh Bear, and I wanted to do a Pooh cake for her 2nd birthday. However, I didn’t want to spend $40 for a store decorated one. I had read of several people who printed out a Pooh picture and either free-handed the drawing on a cake or cut Pooh out and outlined … Read more 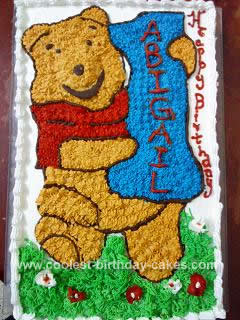 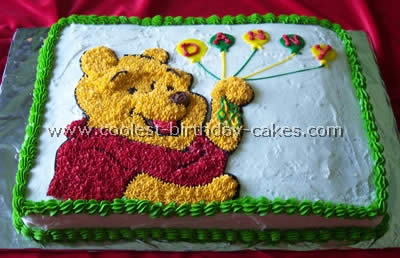 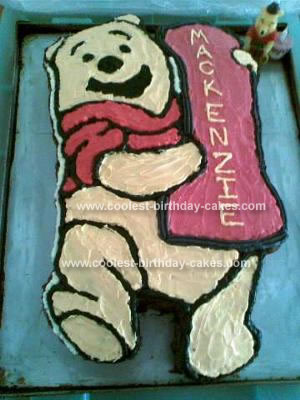 My wife and I made this Winnie the Pooh cake ourselves. It took us 5 hours to complete. Firstly I made two 25cm round marble cakes two days prior to our daughter’s birthday. The night before her big day we shaped and decorated the cake. Firstly we took a picture of Winnie and enlarged it … Read more 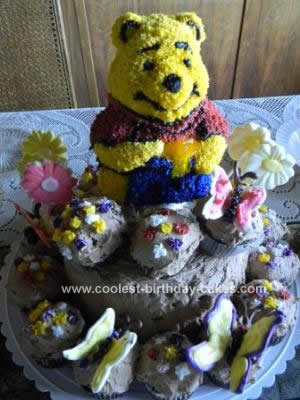 I was inspired to do this Off in the Hundres Acre Wood Winnie Cake based on a previous submission. I added the garden aspect to the stump. The cake is made up of three different kinds of cake. Winnie the Pooh is a white cake with butter cream icing. The stump is white cake with … Read more 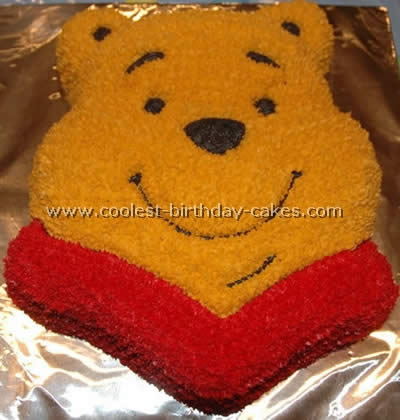 For my sons first birthday I wanted to make him a Winnie the Pooh cake. I had decorated his nursery with Pooh and Friends so I wanted to continue that theme for his birthday. I planned ahead and bought a Pooh cake pan (made by Wilton) before my son was even born! At first I … Read more 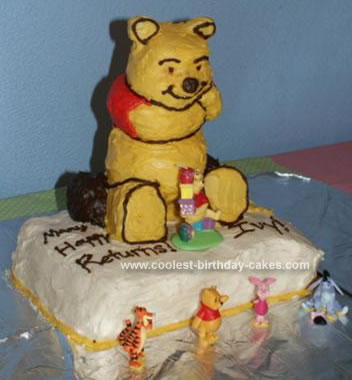 My husband and I made this Pooh birthday cake for our daughter’s first birthday. The base of the cake is two sheet cakes stacked and carved to look like a book. The log and Pooh are carved out of pound cake. The log was carved from a loaf cake and Pooh is carved from three … Read more 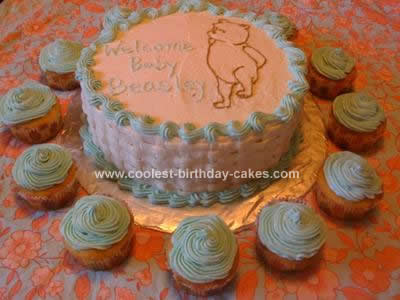 I made this Classic Pooh Cake for my older brother’s baby shower. It is their first baby! I actually used box mixes for this cake, which I don’t like to do but was in a bit of a hurry. One white and one devils food. It was three layers torted to make six. I brushed … Read more 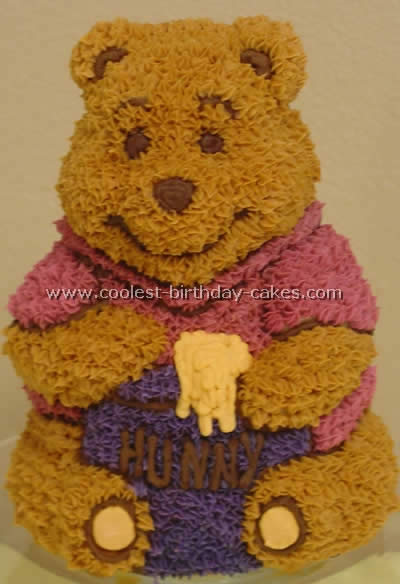 This was created using the Winnie the Pooh Stand-up (or 3-D) cake pan. I found it on EBay as I could not find it in stores. The cake pan came with detailed instructions and even frosting recipes etc. and I had a Winnie the Poo pic in front of me as well. If for some … Read more 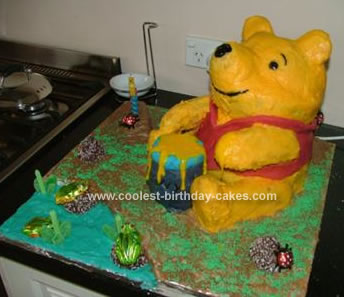 This Pooh Bear Birthday Cake was made for my daughter’s 2nd Birthday Party. He was made from 4 pudding tins, 6 miniature loaf tins, 7 miniature cup cakes and 1 muffin. He was held together by wooden skewers and he needed a glass to hold his head up which was disguised as a tree trunk … Read more 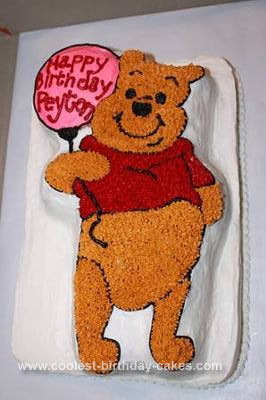 I made this Pooh Bear first birthday cake for one year old Peyton Alexis. Start with the supplies, one Wilton Pooh Bear cake pan. I used two boxes of vanilla cake, one 13×9 for the base of the bear. To get the exact color match, you want to carefully test out the frosting, which I … Read more 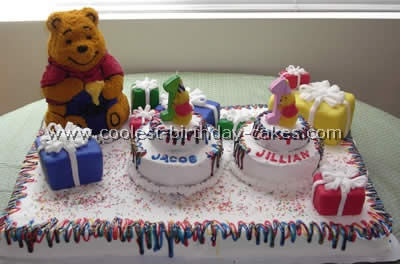 I got the idea for this cake from a Winnie the Pooh pic on this website! There is a cake pretty similar to this one that I just had to make! I used the Wilton 3D Pooh Cake pan for the Pooh bear. He is made of pound cake with buttercream frosting. The presents are … Read more 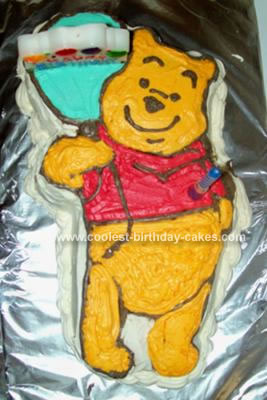 My son was just crazy for Winnie the Pooh. So for his 2nd birthday I decided it would be fun to make him a Winnie the Pooh Cake. I got the cake pan from Walmart in Truro but they don’t sell them anymore. You can get one at the Bulk Barn though. I used a … Read more 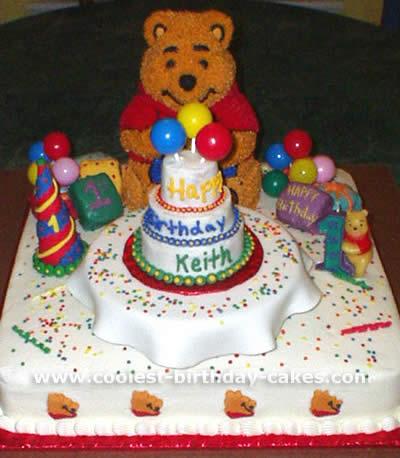 Bottom cake (16×16) is half white/chocolate with fresh strawberry filling and buttercream icing. Pooh is a yellow pound cake. Removable “SMASH” cake is placed on a MMF tablecloth and the party hat is a cone with MMF. The presents are rice crispy treats covered with candy melts and hand decorated. Everything is edible except balloons … Read more 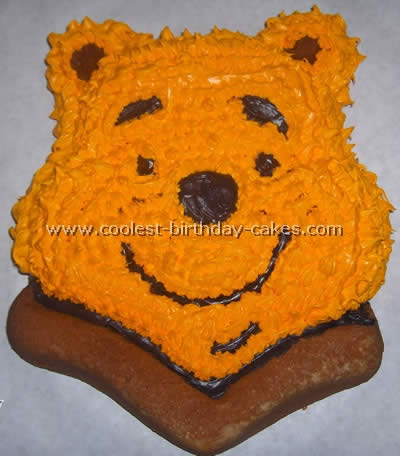 I was able to rent’ the pan from a local bakery and they suggested I use 2 cake mixes which I did. However that means the center doesn’t cook all the way through so I kept putting it back in the oven and made it quite dry. What I was supposed to do was dig … Read more