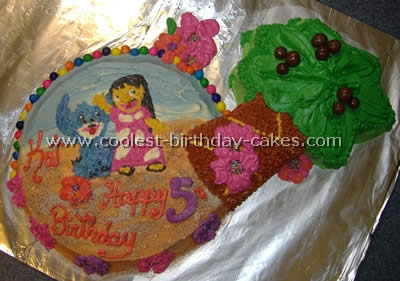 This cake is for my five year old niece. She is having a Hawaiian Party so of course she would have to have a Lilo and Stitch cake. This is my first attempt at a character cake. I thought I would just find a pan of Lilo and Stitch’s face and follow the directions. That didn’t happen. I could not find a single Lilo and Stitch item in my town. So I got creative and had this child birthday cake idea.

I used a large round pan for the center and a palm tree pan. The palm tree is double layered. The round cake is chocolate with some gummy worms hidden in the sand. I had a picture of Lilo and Stitch printed out. I placed it on the cake to try to make an outline to follow. that only worked as far as with the proportions (it almost ruined the cake). Taking it off pulled up a lot of the base frosting.

I used Butter cream frosting and lots of colors. The coconuts are malt ball and there are gum balls at the top for color. For the sand I added hot coco mix for texture over the colored frosting.

I liked the way it turned out. I just hope my niece feels the same way! Either way it was fun!

Being in Canada there’s not really that much party supplies so I had to think of my own child birthday cake idea, something to do with Lilo and stitch.

I printed out a coloring picture of Stitch, drew it onto wax paper for my template. I baked 2 cakes, 1 for the head and 1 for the body. It was a pretty long process but it was worth it.

I used this child birthday cake idea for my son’s 7th Birthday as he just loved Stitch from the Disney Lilo and Stitch movie. I made a vanilla cake and also a chocolate cake, which I used for the ears.

I bought about three different shades of blue colouring as well as violet (for the colour inside of his ears), red for his mouth, and black for the eyes, eyebrows, and mouth. I used milk bottle lollies and just cut them into points at one end to make the teeth. I then just put tiny lollies around the edge to finish it off.

For my daughter’s 5th birthday- I had a Hawaiian luau themed party.

For the middle part of the cake I put cream-colored frosting. For the top part I used decorating spray in green to make it look like grass.

For the bottom of the Hawaiian luau cake I sprayed blue decorating spray over the white frosting to make it look like water.

I added “Swedish fish” on top of the ‘water’. I went to my local bakery and bought a Lilo and Stitch cake topper, which came with the Hula girl and palm trees and surfboard. I added ‘Runtz’ candy on each side of the hula girl.

The Hawaiian luau cake turned out fantastic and my daughter loved it.

The cake I did as an island with Lilo and Stitch figures, I just put a small cake on top of a regular cake, covered the island with hot chocolate sprinkles for sand, this child birthday cake idea was a big hit!

I just got started making shape cakes and I got this child birthday cake idea from my husband. I was going to make a bunny cake but when I pieced it together he said it looked more like Stitch and brought me a picture of Stitch. So I decorated it as Stitch instead of the bunny.

I used 2 8in round white cakes. The head is 1 8in cake and from the other 8in cake I cut the ears.

I used buttercream frosting using gel paste for coloring. I used the Wilton star for most of the cake except for the eyes and the nose. For that I used Wilton writing tip.

It’s the best child birthday cake idea I’ve come up with so far.