This cool golden birthday dragon  cake was probably my best effort, ever, to date. I wanted to make a golden cake for my daughter’s golden birthday. I had already made one golden cake for my OTHER daughter, and I wasn’t entirely happy with it. So I kept thinking, what can I do besides just…gold? Then the idea of the dragon guarding the gold hit me–and she loves dragons!! I did some research on the how-to’s. I knew that many professional bakers used rice crispy treats to model large figures from, but, I wanted detail, and that wouldn’t get it for me.

I’ve tried drawing a dragon in buttercreme before, and I know that fine detail is not buttercreme’s forte. I hate fondant, and am not crazy nor experienced in gum paste. But then I learned that I could make my own modeling chocolate! I watched one of the videos on making and modeling in chocolate on YouTube, and I was off.

Two days before cake day, I made the chocolate. I had some real problems here! As the video had been emphatic about making sure you had cocoa butter in the white chocolate, I bought Giradelli bars. Even though I followed the directions perfectly, when I added the color gel, it started to separate, and I had cocoa butter oozing out everywhere!! The more I tried to stir, the worse it got. Back to the internet. Turns out you can temper chocolate. I didn’t have much more than some Nestle white morsels left with which to “seed” the chocolate, but I ground it up and did my best, and reheated it very gently. It worked; the cocoa reabsorbed! I let it cool. It would still be something that would quickly get greasy in my hot little hands, but letting it rest again would let it chill, and I could work with it again.

The next day, I had to set aside a considerable block of time. I knew that the chocolate could only have a finite time in which it was ideal to work, but never having tried it before, I wasn’t sure what that window would be. I’d bought some tools with which to work clay (much less expensive than the decorator’s equivalent), so I figured I was set. I got out my cake pan, so I would be sure that the dragon would fit in the space I had for it. I put plastic over the upside down pan, and started to work.

First, I rolled out a large ball of dough. It got pliable very quickly! Not like clay at all, not nearly so hard. I discoverd that it was very soft. If I pushed hard on one side to either position it or to hold it while I affixed something, it dented very quickly, so I had to be careful. Here’s where the tendency of the chocolate to get a bit greasy was actually an asset: it smoothes beautifully! So, being careful not to press anything too hard, I worked as quickly as I could. I had the basic dragon done in an hour, which amazed me.

I did the body, then added the tail, head and neck, legs, and wing arms. Then, using my tools, I added the detail. The most tedious was the spine spikes. I did those with scissors, and they were tiresome. First, I molded a thin ridge down the entire body, then I simply cut it and lifted it up, then shaped each how I wanted it. It worked best if I trimmed it, and did little else. I put the scaling on with rose petal tips. I used a smaller scale tip for the extremities, and a larger one for the rest of the body. How deeply I pressed also helped vary the size, so I could do the fine scaling on the face. I did the details on the face, hollowing out a place for the eyes.

For the wings, I knew I’d need something harder than modeling chocolate, so I got some Wilton candies to melt. I set aside a small amount to dye black. It did NOT like the color gel either, and immediately seized up hard! Of course, to make it black requires more color than making something gold, so it really got messy. However, I was able to use enough of it, rolled in tiny balls, to make the eyes. The rest, I discarded, as I wouldn’t be able to pipe it. I’d watched “how to make chocolate butterflies” on YouTube, and figured the concept was similar to dragon wings, so I was going to do that. I wanted dark accents, so I was going to pipe black and fill with gold.

That wasn’t going to work, since the black wasn’t available, so I decided to use semi-sweet. Note to others: semi-sweet has a difficult time hardening up again. My first effort was too thin; my second effort was thicker, but I’d made it the wrong shape. I only decided that after I’d put them in, but after looking at it, decided the wings were ruining it, and I redid them completely. The second effort matched the color perfectly (total serendipity).

I ran the modeling chocolate up the wings in strips, including top and bottom, so it would look like wing bones and help attach it. The first time I tried to attach them, I realized I’d put on too much, and they were too heavy. So, I took them off again and made the strips much smaller. That worked well, although, by this time, the wing arms had hardened, and I ended up having to rework them and rescale them.

I covered the whole scupture with glitter dust, applied with Vermouth. If you use anything water based, it will just bead off chocolate, but I’d heard alcohol was pretty effective at applying the glitter. It worked fairly well. I also sprayed the wings with the same glitter spray I did the cake with, and it did seem to adhere fine.

The base was the simplest and fastest cake, ever. Golden cake with golden frosting, sprayed with edible glitter, topped with poorly mixed grey/white/black frosting, and textured to look like rocks, with some added formations like stalagmites (my daughter is a big believer in lots of frosting!). I placed the dragon carefully; although I was afraid it would break, it was just fine! For support, I put several plastic rods underneath the dragon. At over a pound, he’s a hefty cake topper! For the final touch, I added a treasure for the dragon to guard: gold foil wrapped candies! 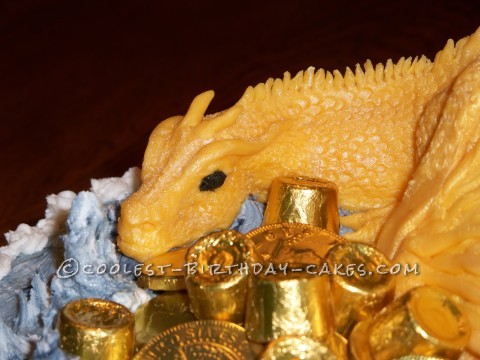 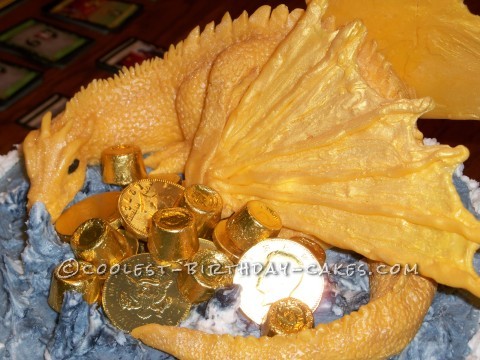 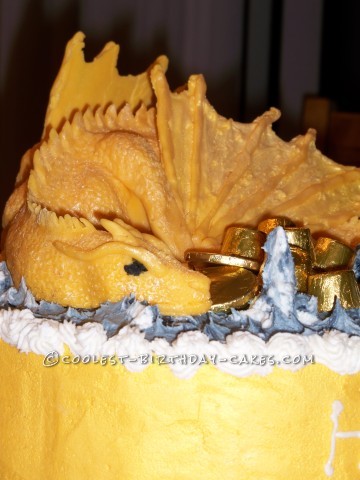