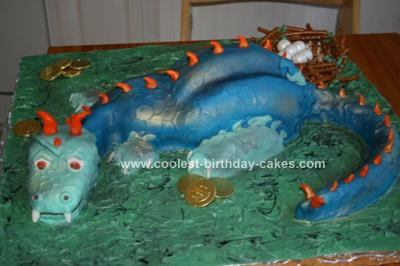 This Dragon Cake was made for my son’s 5th birthday. I came to this website to look for some inspiration and liked different aspects of several different cakes. So, I put the things I liked together to come up with this dragon.

This was only my second fondant cake so there were a lot of bumps during the process of making it. However, seeing my son’s face and his friends faces light up when we brought out the cake made all the time spent and effort worth it.

The 8 x 8 cake was used to shape the neck, shoulders, rear legs, and other areas that needed some fillers to help with the over all shape. Once the dragon looked like a dragon, I “glued” the pieces of cake together with frosting and put a thin layer over the entire cake as a crumb cover.

Next I sculpted the tail, front legs and head from Rice Krispie treats. Using store bought fondant, I covered the cake and the Rice Krispie treats. As I rolled out the fondant I pressed in a pattern to create the effect of scales. Then I used other colored fondant to make the spikes, claws, eyes, etc. As an added effect I cut out club like shapes with a cookie cuter and layered them like scales. This added dimension and covered up some of the rough spots where two different colors met or where the leg met the body. I then used some black cake spray to define some of the areas and used gold paint to give the dragon some sparkle.

I then covered a cutting board with tinfoil and frosted it, added a nest made out of pretzels and gum balls, added some gold coins, cut a few carrot strips and shaped them like fire for the dragons mouth and lastly added the wings. For the wings I used Fruit Roll Ups and decorative cake wires. 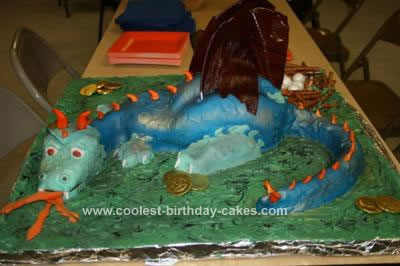 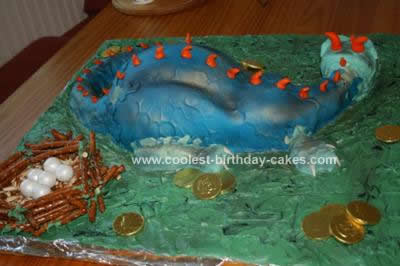 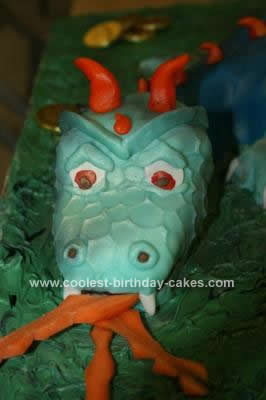