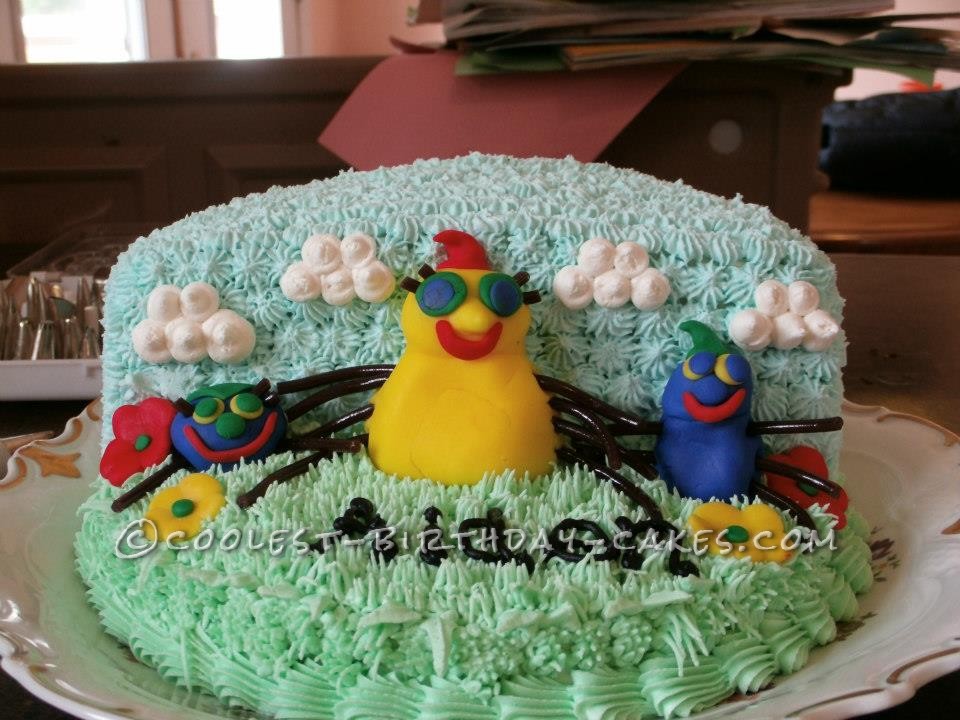 This Miss Spider’s Sunnypatch Kids cake was my first attempt at fondant characters. It was much easier than I imagined it would be. My son had his heart set on a Miss Spider’s Sunnypatch Kids cake. I knew it would be a challenge, so I offered other ideas. Well, he wasn’t having it, so I broke down and bought some fondant, thinking I was sure to fail.

The majority of this cake was done with butter cream piping (atop chocolate cake) . I made a 2 layer cake and cut the top layer in half, and placed one half on top of the other to create the structure of the cake. Then I frosted the whole thing, and began to pipe the blue sky, the green grass, and the white clouds. This was well within my experience  but the whole time I was dreading making those little characters.

Finally, with all the piping done, I began sculpting Miss Spider. She turned out to be surprisingly simple to create, and I sat her on the cake. I was still nervous, because in spite of all the beautiful work I’d already accomplished, I knew these characters would make or break the cake. Well, after Miss Spider turned out so well, I moved on excitedly to sculpt two of her children from the television series. They weren’t so tricky either.

As you can see from the photo, my first attempt at fondant sculpting turned out pretty good. While I still don’t care for the taste, texture, or smell of fondant, it’s nice to know it’s within my skill level for adding accents to cakes. It definitely did “make” this cake, since my 7 year old was so pleased with the result.  Even though he’d already seen the finished product before the party, his smile was so bright when everybody started singing “Happy Birthday,” to him, and he saw me come in with the cake he’d wanted. That smile makes the whole process worth it every year when I make him a home made, home-decorated cake.