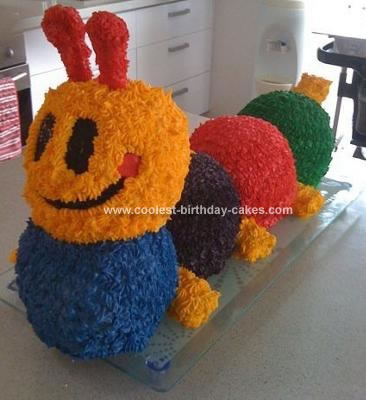 I made this for my friend for her sons 1st birthday (Linkin loves Baby Einstein).

I used 1 liter Pyrex glass bowls (which you can buy from any super market) lined with baking paper to bake the balls. I had 3 different types of cake – 1 ball caramel mud, 2 chocolate mud and 2 chocolate sponge, I then trimmed the crust off the tops and cut them down to the shape I wanted (there is a fair bit of wasted cake).

I used sponge cake for the head as it was sitting on top of the blue ball as mud cake is a bit heavier. I stuck each ball together with butter cream ,put a smooth layer all over the outside of the ball. To stick together all the balls I just made 1 batch of the butter cream with no colouring and iced all the balls (the butter cream is great as it hides all the cracks and bumps).

Each ball took nearly a full 50ml of food colouring. I then started from the back with the green ball. I used buttercream and just coloured it with food colouring, I piped the icing on with a star nozzle (disposable piping bags are great… only put a little icing in a piping bag at a time, as your hands melt the butter in the icing if touching to much).

To make the purple ball, it is 3 parts red to 1 part blue but to brighten it up a bit add more red.

I trimmed the blue ball a little more so that the head would sit on right. I trimmed out the face ( mark the eyes and cheeks and mouth). I used black gel cake writing pen for the eyes and mouth (if you add black food colouring to the buttercream it just splits), and make sure you leave some of the red icing for the cheeks and the ears as you want it the same red colour as the body.

Put the head back in the fridge for a bit to let the face set before icing on the yellow. I put the head on before icing it. Put 4 skewers in the blue ball then sit the head on top, I then used banana cake bars trimmed down for the tail and the feet put then into place i used 2 skewer cut down to stick the tail into place, then I iced the head, tail and feet.

I used short crust party for the ears that I cut out into the shape I wanted (before baking insert skewer into them so that you can stick them into the cake), and iced them with the red icing (stick the skewer into an orange or apple before icing so it makes it easier to ice so you can have both hands free and ice both sides).

It took a lot of time as each ball took 1.5 to 2 hours to bake, so make sure you leave yourself a lot of time. The icing took about 3 hours. Also, I had a bit of cake mix left over so I made little cupcakes and used the different coloured icing to ice them, wrote ‘linkin’ and placed them in front of the cake.

Then store cake in the fridge, but to serve you want it at room temp as the icing goes hard in the fridge. It’s a lot of work but well worth it in the end to see the finished product. 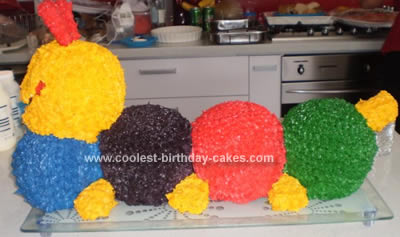 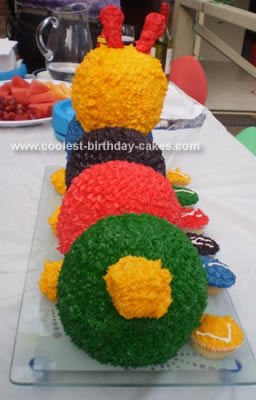