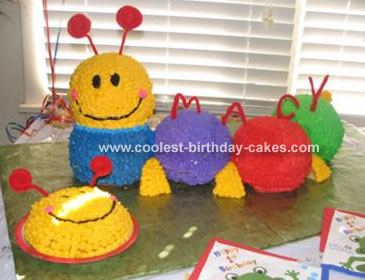 I made the baby Einstein Caterpillar Cake for my baby’s 1st Birthday. She loves Einstein. I purchased the Wilton’s Ball Pan from Hobby Lobby. And I made up 6 different cakes, and froze them after they cooled just a bit.

I did this 2 days before the party. The day before her party, I mixed up icing and made 5 different colors one for each ball. I made Yellow, Blue, Purple, Red and Green. Make sure you make plenty cause the colors are hard to match. I took my cakes out of the freezer and sliced a small bit from the bottom so it would not roll off the cake board. Then I put the two half spheres together with pudding and icing. (I just bought the pudding cups).

Once I had the cake put together I used a number 18 tip and made stars all over each ball with the separate colors. I placed wooden dowel rods in the blue head for support over the yellow head. I had to cute a cardboard circle out to set the yellow heard onto the rods. Ice the yellow head before you put it on top. To make the feet I used the other sphere from the smash cake and cute into small quarters. Then frosted yellow stars.

I used a toothpick and attached the tail, and frosted it yellow. Since I did this the day before the party, I left the head off and did not make the smiley face until that next day, or it will bleed onto the yellow. To make the smiley face I used a cup and lightly pressed it on for the mouth, then follow it with a small black gel icing tube.

I also made a smash cake out of half another sphere. Then I used red pipe cleaners to spell her name out, and placed them on each ball. The cake was a huge hit, even though it was time consuming. This was my first cake I had ever made.