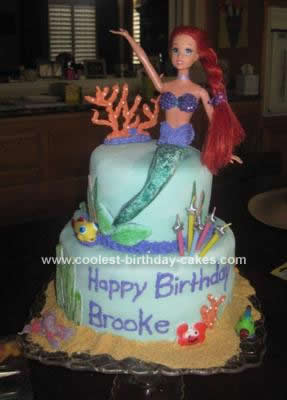 This Ariel cake is comprised of ideas from several Ariel cakes on this website. The cake is made using 2 boxed cake mixes: lemon (with lemon jello added) and strawberry. There was a lemon and strawberry layer of each size – two 10″ layers on the bottom, two 6″ layers on top.

I used an online recipe for homemade marshmallow fondant, and made it a day ahead of time. I covered the cake (and between layers) with buttercream frosting. Then I rolled out the fondant (I found that cornstarch worked best on my granite counters) and draped it on the cake. I used a 1 1/2″ pvc pipe to roll the fondant. I had difficulty getting the fondant smooth, and eventually gave up and made the front smooth and covered the wrinkles with decorations on the back side! The mermaid tail is also made of fondant. I placed the top layer on a hidden cake plate for added support (the double layers, buttercream, and fondant are HEAVY.)

The coral on the top layer is white chocolate that I piped onto non-stick aluminum foil and dotted with candied pearls. I made several extra because they are so fragile. I needed them too! The sea grass is made from sour patch strips, and sour patch straws. The star fish and crab were pre-fab candy purchased at a cake store. The two rubber fish were found around the house. The octopus is also sour candy. I used vanilla cupcake goldfish and candied pearls for bubbles.

The hardest part of the cake was getting Ariel to stay upright and not insert her too deeply into the cake. Eventually I took her tail off, and put two kabob skewars up into her torso. I made a ball of fondant for her to ‘sit’ on and pushed the skewars through the fondant, then covered her exposed waist in buttercream. Her tail and bikini top are covered in sugar glitter, while her tail has colored sugar crystals. All fondant was colored blue, so I needed the glitter and crystals to off-set the blue color. 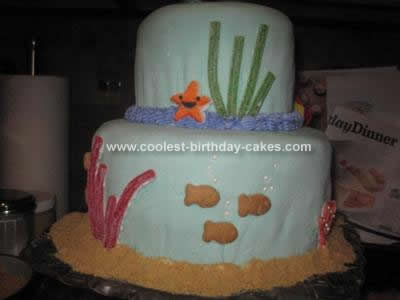 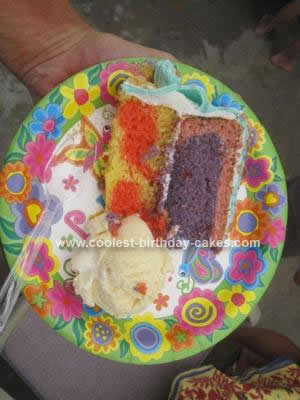