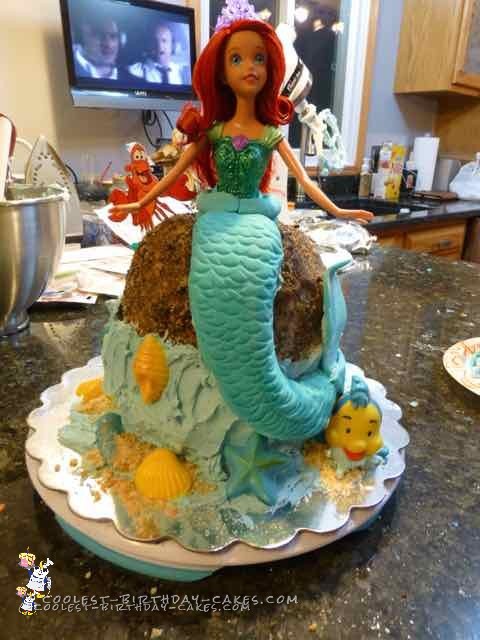 My youngest son’s girlfriend’s daughter (5) asked me to make her a Little Mermaid birthday cake for her birthday. She had seen the Elsa and Anna doll cakes I made for the first time for my granddaughter’s birthday party a couple weeks earlier and wanted an Ariel version for her birthday.  So, I told her I would make her one.

First I had to figure out if I should make Ariel as a mermaid or as a princess.  I decided to try the mermaid. Why not?!  I had such a hard time finding a Disney Little Mermaid doll!  Everything is Frozen right now, of course!  I finally found one, but she did not have the “shell” top. It was a dress top.  Oh well!  Who would know.  I bought the doll, but still took a couple days to shop in other stores to see if I could find Ariel as a Mermaid instead of a Princess. No luck!  So, I settled on what I had.

Now to search the internet for pictures of Little Mermaid birthday cake ideas.  I decided to make the cake the same as I did the Elsa and Anna cakes, but I would make the top part look like Ariel was sitting on a rock. Oh, and I also had no luck finding a Flounder and Sebastian to put on the cake.  So, I went to Ebay, found a Flounder and bought it. Dummy me for waiting a few days and looking for Sebastian.  I actually found a Flounder and Sebastian in one auction, bid on it, and then forgot I bid on it!  I got busy helping my parents with a garage sale and had won the auction without knowing it.  When I realized I had won, it was too late to get Sebastian for her on time for the party. I decided to figure that out later.

NOTE: Make sure to use Pam spray with flour, and wipe around your pans well with a paper towel.  The cakes come right out, no problem!

Next time lay down paper towels all over the counter top to catch leftover cookie crumbs.  What a mess it is to put cookie crumbs all over the top 1/2 of the cake and stick them to the frosting.  But, it turned out just as I pictured in my mind.  So I smiled and cleaned up mess on counter and floor.

My Little Mermaid birthday cake was DONE!  …and a little girl was Happy Ever After! 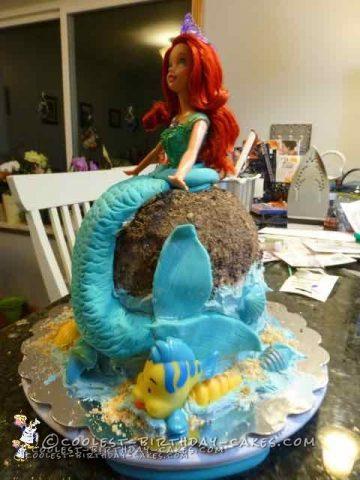 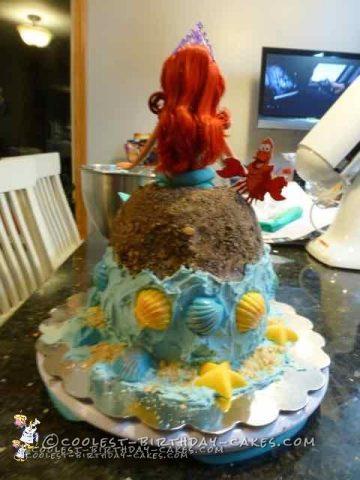 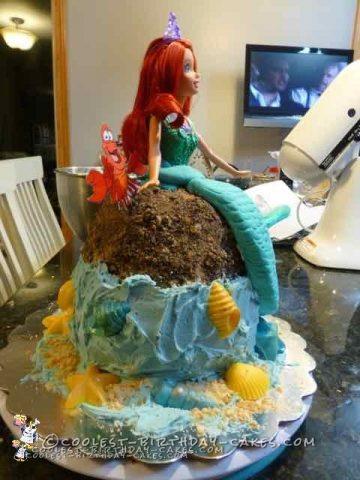