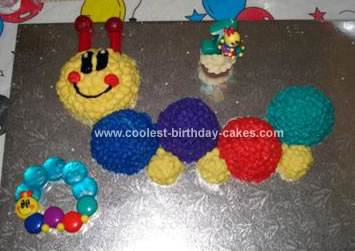 My son was into Baby Einstein and I wanted to have something different for his first Birthday. I couldn’t at the time find anything online that was more than a flat cake with a drawing on top. So I made this Baby Einstein 1st birthday cake.

I could have used the Wilton mini ball pan, but I went to my local bulk barn and was not able to find one so I used a pan that had four dome shapes. I used my son’s favorite applesauce oat bran muffin recipe ( I was going for healthy for him to eat). I cut a small part off the top of each cake/muffin, to make the caterpillars body.

I also made mini muffins so I had some for the legs of the caterpillar as well as one to put the candle in, which I had to order online (along with all of his decorations). I used a cream cheese frosting and Wilton’s concentrated food colors, the purple did not show up properly in the photo, but you get an idea of the colors from the teething ring.

This was done last year and was my first cake. I used a small tube of Wilton’s gel icing in black to do the eyes and mouth, also using the cream cheese icing in white for the tips on the eyes and I used fruit rollups for the antenna, as well as icing for the cheeks. You can also try fruit by the foot for part of the antenna but fruit roll ups have a nicer colour!

The cream cheese icing made it harder to work with so it is not what I would recommend but it was my first cake. Just let the cake warm on the counter for a bit before serving! My son couldn’t eat it as well the first attempt, he ate it later when everyone was gone!! His face lit up when he saw it! And since he eats healthy and won’t eat much sweets, he was able to enjoy his favorite muffins instead! (with a little icing on top!)