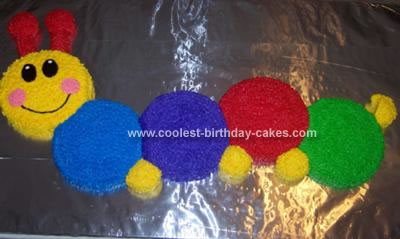 My little girl really enjoys her Baby Einstein videos, so for her first birthday my wife and mother-in-law made a Baby Einstein Caterpillar cake. This was a great choice for more reasons than just my daughter’s love of Baby Einstein.

First, since we were expecting upwards of 30 guests, we needed lots of cake, and the large size of the cake took care of this requirement without having to use “dummy cakes.” Second, the different colors and cake varieties allowed our guests (especially the little ones) to pick a color and/or cake flavor that suited their taste.

The head and body segments were made from simple round cakes, baked in pans that belonged to my wife’s late grandmother. The feet, tail, and antenna tops were made from cupcakes, and the stalks of the antennas were cut from a sheet cake. The icing was homemade buttercream, colored with various Wilton Icing Color dyes.

The icing was applied with a star tip, while the eyeballs and smile were applied with black lettering gel. An accompanying smash cake was made from a round cake with white frosting, and was decorated with a much smaller representation of the large caterpillar.

Starbursts of all the colors used on the caterpillar body were used to outline the perimeter of the smash cake.