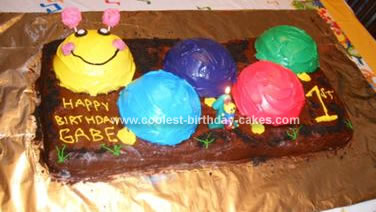 Baby Einstein was the birthday theme and this is how the caterpillar cake was created:

The bottom of the cake is a large rectangle pan using 2 cake boxes. I frosted it with chocolate and used crushed Oreo’s as dirt. I used green gel to add some tufts of grass.

The body was made out of Wilton’s ball pan. Each section is half a ball and is colored white frosting using Wilton’s gel frosting color to match the Baby Einstein caterpillar. I frosted these separately before placing on the dirt.

The feet and tail were made using the same frosting as the face and I used a frosting funnel to make them. I bought the candle and that ended up being the finishing touch.