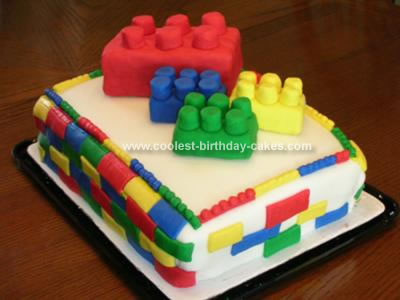 This Building Bricks cake was an adventure that my 9-yr old son and I went on. He is a huge collector and really enjoys all the food challenge shows on TV. So, when he came to me with the idea to do it, of course I said yes!

I gave him the pre-colored fondant that he cut out with a pizza cutter into rectangles for the sides of the cake. He then used that to make the smaller pieces on the outer edge to look like it connected the side to the top.

The larger “Best Building Bricks” connector center pieces are marshmallow treats covered with the same fondant and also that fondant rolled into the studs.

I baked two 13×9 white cakes and stacked them with a milk chocolate icing between. I also put a homemade buttercream icing on the outer layer before placing the pre-rolled fondant on. I knew we wouldn’t actually be eating our (personal choice)fondant and that was for that reason. The cake tasted GREAT!

I truly feel that my Ben really showed off his mad skills and as for me that has never worked with a piece of fondant at all,(and then it be that big!) it turned out way better than we could have ever hoped! Everyone really thought it was clever and enjoyed it.