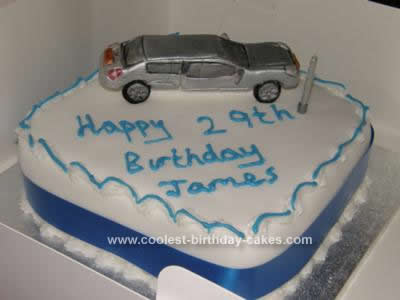 I started by making the car on the Homemade Car Cake. My son’s wife e mailed me some pictures of their car so I could make it out of icing.

I started with a small block of white icing and added some flower paste icing this helps the icing to harden. I kneaded this well and cut a piece off to use for the number plates, mirrors and wheels.

While this was setting hard I made the spoiler out of flower paste icing. This needed to set hard before assembling to the car. I made two small number plates and two mirrors and then made four wheels pressing the shape of the alloy wheels into the icing. Left these a day to set hard.

The alloy wheels were painted silver and I coloured the tires black with a black powder. All these were then left aside to be assembled onto the cake when it has been iced.

I baked a 10 inch Madeira cake and when completely cool I split it in half and filled with jam and butter cream, then crumb coated the cake and left in fridge for about 1 hour to chill the butter cream.

I piped iced a message on the top of the cake and attached a ribbon around the cake to finish it off. My son loves his car. He also loved the Homemade Car Cake I had made for him. 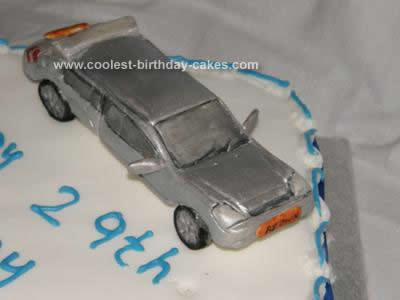