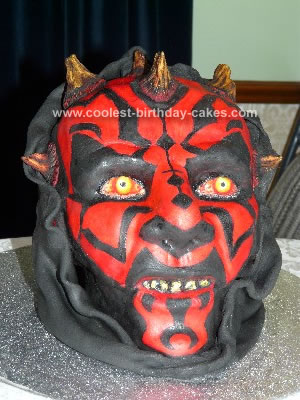 First I’d like to say thanks to all the people who gave their ideas on this site. I made this homemade Darth Maul birthday cake after looking at your lovely cakes for my son Luke on his 4th birthday.

I used 3 round fruit cakes stacked on top of one another and slightly stepped (this helped to make the face more 3D). I put a dowel through all 3 at a slight angle to give it a bit of stability.

I then cut away pieces of the cake to make it look like a face and added small pieces of fondant icing to make the nose, chin, brows, etc. more prominent. I then covered the whole of the front with red fondant icing. I just used white for the back as this would be covered later.

I bought a pot of special black cake colouring and using a picture as a guide began painting in the black tattoos. I cut out white teeth and eyes from fondant icing and using colouring – discoloured the teeth and painted the eyes and then stuck them on.

I took lumps of white fondant and shaped them for the horns. I took a knife and slashed all the edges to make them look ridged. I then painted with edible colouring and stuck them on the head.

The last thing I did was take as big a piece of black icing as I could lift and lay it around the head to make the hood. Believe it or not, the hood was the hardest part. But later I realized it would be easier to use smaller sections and make a fold to cover the joins as I went along.

I really enjoyed this homemade Darth Maul birthday cake and it was quite easy to do. My son was over the moon with it.