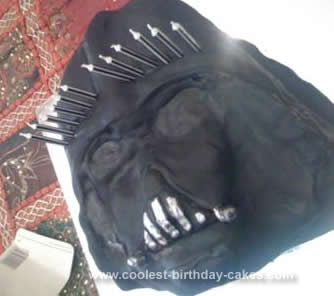 For my son’s twelfth birthday I decided to attempt a Homemade Darth Vader Birthday Cake. I got some tips off the internet and started. I decided to make it in two halves (top and bottom).

For the first half I used heavy duty solder wire and made a 3D frame that would serve as the back of DV’s head, then cover the frame with triple layers of heavy duty foil.

Second, using a cheap Darth Vader helmet, I took triple layers of foil and pressed it into the helmet to make the shape of the face, then I made a wire rim just to ensure it kept its shape in the oven.

Next I made double batch of Madeira Cake, filled the homemade cake tins and baked. Unfortunately the Madeira cake was to heavy for the bottom half, once it came out it broke apart, so I had to change the cake to a 2D (disappointing) but I continued. The face (top) came perfect, baked a full 2 hours but looked great (success).

Next I put cling (plastic) wrap in the helmet and moulded black sugarpaste icing into it and froze for about 2 hrs. After jamming the surface of the cake, I transferred the icing over to the cake, I used whatever tools (spoons, forks, etc) available to mould the eyes nose and mouth being very careful not to tear the sugarpaste icing, edible silver paint for the grill, black butter icing to fill gaps and that (at least to my son) is the coolest Darth Vader Cake. 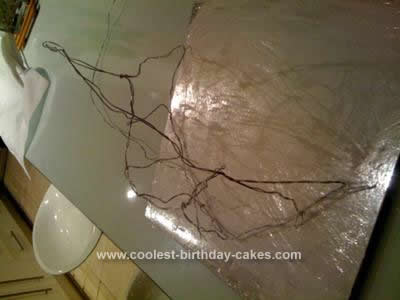 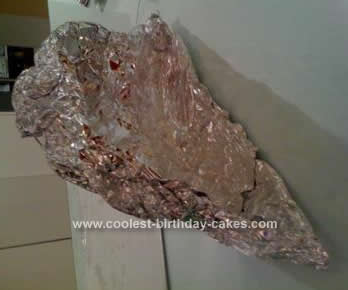 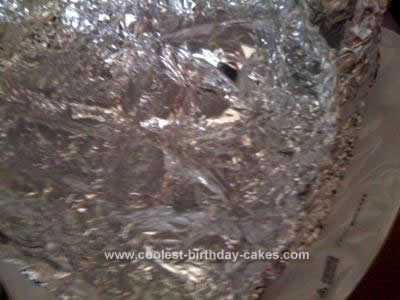 Coolest Dark Chocolate Side of the Force Cake (Darth Vader)