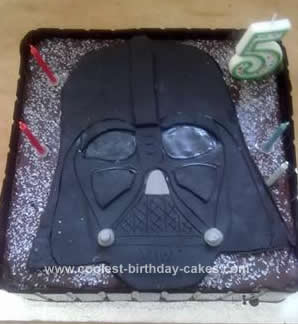 I made this Homemade Darth Vader Birthday Cake for my son’s 5th birthday yesterday. He is a big fan of chocolate cake, and does not like jam at all, so I had promised a chocolate cake with no jam.

So, I made a square 25cm rich chocolate cake, about 6cm deep, using a bar of melted Belgian chocolate as flavouring rather than cocoa. While the cake was still warm, I brushed over home-made sugar syrup to keep it moist.

The frosting was more Belgian chocolate, melted into a mixture of water, golden syrup and sugar, whisked and poured over the top. Before it set, I sprinkled on silver flakes all around the edge.

Now to make Darth Vader, I had purchased jet black icing and white icing as well as black paste to make the white into a silver grey colour. I used the silver icing to make the nose and bolts, then rolled out the black icing flay before polishing it with the flat of my hand.

I used my son’s Darth Vader mask as a template for the outline, and cut around it, then traced out the rest of the features freehand with a sharp knife.

I then cut a strip of icing for the front of the helmet, and shapes for eyebrows and ‘cheekbones’. I used sugar syrup to make the eye-holes shiny.

I had some gel to do additional highlights, but my son had pronounced that he liked the mask so I resisted any further meddling. After a few nerve wracking seconds and a couple of deep breaths, I carefully moved the mask onto the cake. My son added the candles and my husband made the space-age cake ruffle and fixed it around the sides.

I’m very pleased to say that it was well-received by everyone at the party. As were the sparkly star cupcakes. It was a Star Wars theme party, naturally. 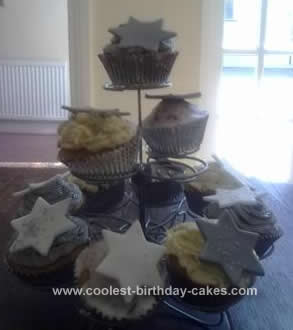