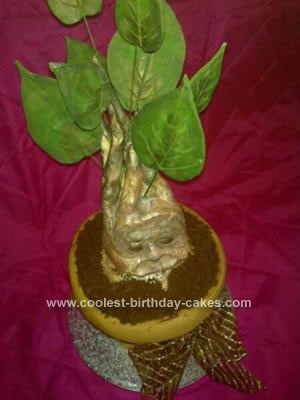 I was asked by my daughter to make a ‘Harry Potter’ themed cake for her best friend’s 18th Birthday. I had seen many cakes depicting the books, sorting hat, wands etc and wanted to do something different. I had seen a Harry Potter Mandrake Cake but thought the root person wasn’t ugly or magical enough. I made my own version!

The plant pot shaped cake was baked in…..a plant pot! I lined it with baking parchment and cake release. Just a nice pound cake recipe. Once cooked and cooled I sliced it into 5 layers and filled each one with toffee sauce and chocolate fudge frosting. Once assembled back in the shape of the plant pot, I covered it in terracotta coloured fondant, and placing it large end down, left it to firm up.

The Mandrake was made from fondant and the upwards roots were modelled around wire. It was left laying flat overnight to dry out the roots. It was then hand painted with food colours and then when dry it was dusted with two shades of icing shimmer, getting darker green as it went up the roots. The leaves were green fondant and were also dusted with the shimmer for a little more texture.

Once upright, the plant pot had the Mandrake placed on it and chocolate fudge frosting spread around the roots. Crushed bourbon biscuits made a great soil!

My 15 yr old daughter was really creeped out by the cake, she asked me to move it as she felt like it was staring at her! The birthday girl was really thrilled and was able to ‘uproot’ the mandrake before we all ate her plant pot! 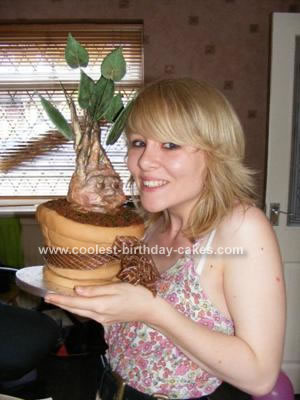