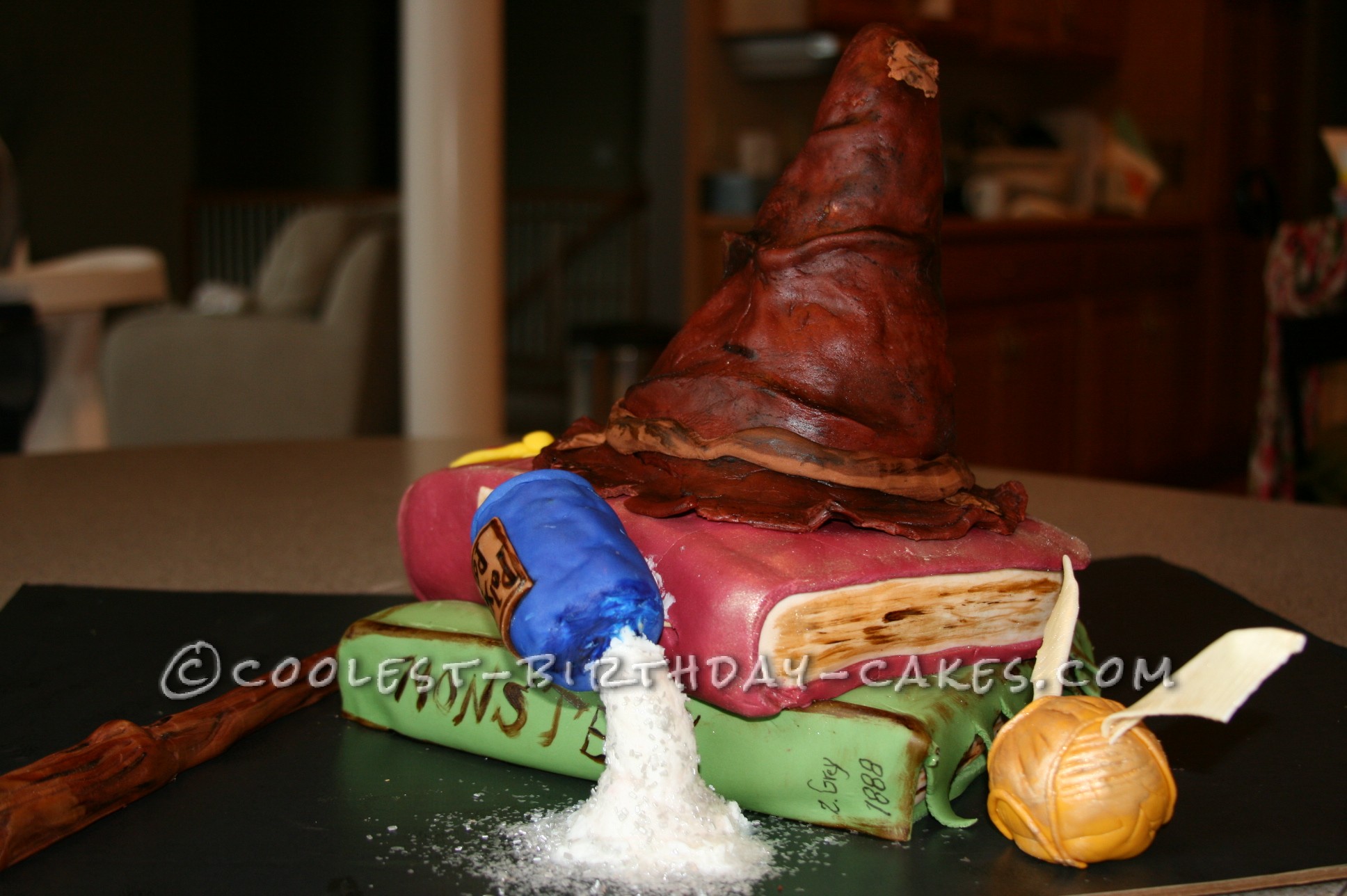 This Harry Potter birthday cake was my first attempt at making a fondant cake. My cousin helped work some of the detailing. I was stupid enough to even make my own fondant on this one. Would not recommend that trick. Nice but totally unnecessary. Who eats it anyway?

My son was turning 8 yrs old and it was near the time of the last film so Harry Potter was back on the map. This Harry Potter birthday cake ended up being a huge labor of love….labor for me….love for my son.

Lets start with the books. Those are the cakes in this beast!  Just a 9×13 that I cut down to make book size and covered in the homemade colored fondant (Aghhh). I used brown and black icing colors diluted slightly to essentially “paint” an aged look and the word Monster. Next, I created the antique labels of the book and jar with fondant and the diluting paint effect. I used edible markers to write the wording on that.

The jar, the snitch, the Sorting Hat and wand all are a base of sculpted rice krispie treats. We formed the shapes and finished the details with fondant. My cousin worked the wand and jar using a knife to etch the wood grain. The painting effect gives a contrast of colors. The “pouring powder” is a krispie molded into a point and covered in white fondant. We then used a combo of white and silver decorating sugar and glitter. We set the molded funnel into a pile of the sugar/glitter to give the effect of pouring out.

The fondant is molded and distressed for the Sorting Hat. I created the subtle face features by molding the fondant. Then, I used the painting again to give dimension and character. Then, I just roughed up the rim of the hat to give it a rutty aged look. I used a different color fondant to add a few patches and the rope around the rim.

The Snitch was simple until the wings…I used a yellow fondant and with the knife added the detailing grooves and used some thinly rolled fondant for the other decor. Then again chose a darker color to give added age to it and finished it with edible gold dusting powder for the sheen. The wings were about to set me into orbit.  I had not realized the trick of letting them dry first…Serendipity when I gave up on them for a bit.  I cut them out and cut an edging on them to look like feathering and dusted them with gold powder as well.

Finally the Griffindor Scarf. Using remnant of the maroon fondant and yellow used for the snitch I cut out a scarf length in yellow and then made bands of maroon color to create the striping.  And made little tassels by rolling fondant into threads and secured them with a “button” of matching color fondant.

I kept the Harry Potter birthday cake a surprise from my 8yr old by not finishing it until 2 AM.  He loved it and was so excited at all the components. It was hard but worth the efforts.