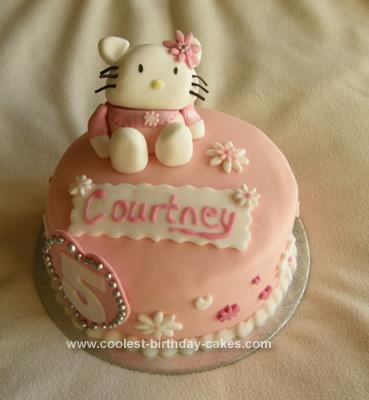 I started this Hello Kitty cake by baking two 8” sponge cakes. When these were cool I applied jam to one cake and butter cream to the other cake and stuck them together. I then leveled the top of the cake before applying the butter cream all over the cake. The cake was then placed in the fridge to chill.

Meanwhile I made the Hello Kitty’s body in light pink color. I then made a small circle with a scalloped edge and placed this over the body in a deep pink. I then placed a small cocktail stick into the body to support the head.

I made the kitty’s head in white icing, attached a small circle of icing in yellow and flattened it slightly to make the nose. I then made three small holes in each side of the face to attach six small pieces of liquorice to make the whiskers. I made two triangle shapes and indented them slightly for the ears and attached these with a little water with the leftover deep pink icing. I made a medium sized flower to attach by the kitty’s ear. I then attached the head to the body using a little water also making sure the cocktail stick wasn’t too long so it didn’t poke through the head.

In the pink icing I made two arms and attached a small amount of white icing to the ends for the paws and attached these to the kitty. I then made two feet in white. I also made a small white flower for the dress. The cat was now finished. This was placed on a board to harden over night.

Out of flower paste icing I made a heart in deep pink and cut out a number 5 in white icing and with a little water attached it to the heart. This was placed on a flat surface to harden. This paste sets really hard.

Next day the cake is ready to decorate. I placed the kitty on the top of the cake attaching with a little royal icing, and attached the heart to the front of the cake.

In white icing I cut out some flowers and some hearts and did the same in deep pink.

I made a oblong plaque with scalloped edge and piped the name on it and attached it to the cake, then with the flowers and hearts I cut out a little earlier I started to attach them around and to the top of the cake as decoration. To finish off I piped small dots on the flowers.

I was really pleased with the end result. 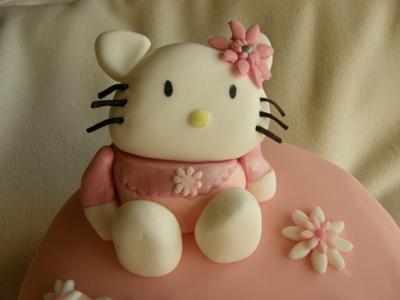 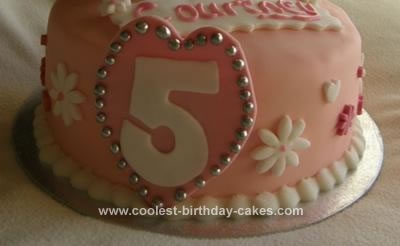