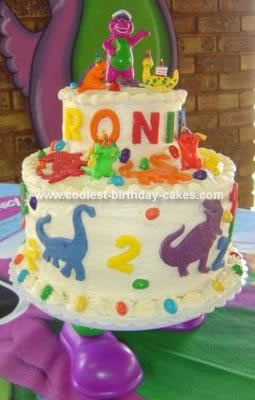 I could not find or think of a 3D Barney the Dinosaur cake for my son’s second birthday. I, therefore, baked two ordinary round madeira cakes and turned them into extraordinary cakes by using tinted royal icing cutouts. Being a busy mum and engineer, I resorted to readymade vanilla icing, with which I smoothly iced the entire cake and piped the edging.

I bought readymade, royal plastic icing and tinted small portions using powder colouring, which, I feel, gives a brighter colour and does not make the icing too sticky.

Dinosaur-shaped cookie cutters were used to cut out various dinosaur shapes and I also used alphabet and number cookie cutters to cut out the letters of my son’s name and his age. These I placed around the cake along with Wilton dinosaur candles.

I placed the smaller cake on top of the larger cake and held the two in place by sticking a skewer down the middle of both. I did ,however, off-set the top cake, so as to have more space for the dinasour cutouts.