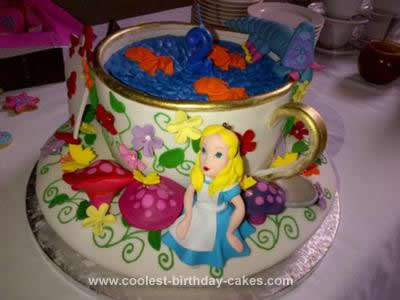 This Homemade Mad Hatter Tea Cup and Saucer Cake was my first ever cake! I thought making a tea cup/saucer for my little girl Cody’s 2nd birthday would be cool. I had no idea what I was in for! I spent a lot of time at the local Bakers warehouse asking dumb questions and on the internet researching fondant, butter cream and royal icing techniques!

Luckily I started 4 weeks early working at night while my 3 month and now 2 year old were asleep, doing each character from pictures I downloaded and printed. The cat I cut out template pieces from a printed image which I placed onto rolled fondant and then stacked and glued together with CMC powder and water.

The Alice I made a mold of my baby girl’s Barbie face with a lot of CMC and fondant then used pure fondant to press into the mold as the CMC powder hardened too fast not allowing me to tweak the features. It also didn’t press into the mold nicely but this meant it had to be left for 5 days to set before working with it!

The caterpillar I molded like one would clay, also without CMC in order to have more time to work. I used a glass bowl(covered in cling film) the same size as my cake tin to shape it so it would sit on the rim of the cake later. The cards I cut out of rolled fondant an layed them on wax paper covered card that I had rolled the corners off, to get the shape, then I cut the spade and club shapes out of thinly rolled fondant and ‘glued’ them on too.

Butterflies were made using a store bought press cutter and I then layed them in a large open book to shape the wings (dust the book with corn starch so they don’t stick). For the water I piped blue icing with a large teardrop shaped nozzle used flat. I used Royal icing to pipe the vines and to ‘glue’ the flowers and leaves on.

The actual cake was vanilla sponge, 1x large 40cm cake that I carved into for the saucer and 3x 20cm cakes stacked with butter cream then carved. I covered both in butter cream and then fondant. I iced and covered the cup upside down standing it on a 20cm polystyrene round in order to get the ‘cup’ higher than the cake.

My husband was so amazed by the cake I had to argue with him to allow me to cut it and serve it to our guests at the party! Everyone loved the cake! 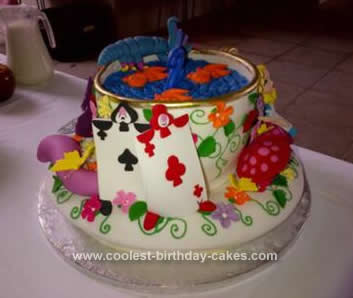 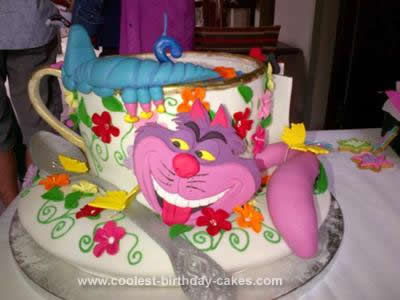 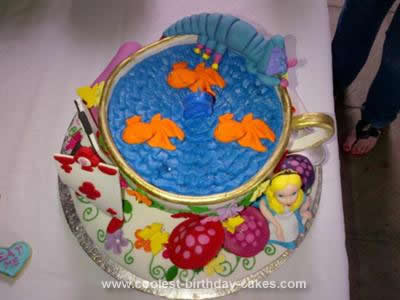