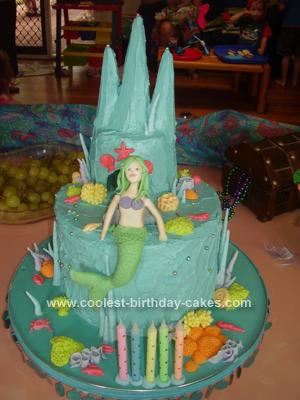 I have only been making “fancy cakes” for a couple of years, and only for my two kids’ birthdays’ (7 cakes all together). For my daughter’s 5th birthday we agreed on a mermaid theme, so I began searching for inspiration. Debbie Brown’s Sea Palace cake (in the Gorgeous and Gruesome Cakes for Children book – highly recommended!) was the sort of look I was after, but having very little experience with fondant, and not particularly liking the taste of fondant anyway, I decided to do it a little differently.

I began by molding the shells, sea weed and corals from fondant colored with Wilton gels. A book of sea shell photography was also helpful. One of my fondant modelling tools came in handy for making the clam shells as it had a fan pattern. I just made small balls of fondant and then pressed them flat with the tool so that it indented the pattern, then I cut the shape out freehand with a small knife. I also made a starfish, and a tiny crab which was very fiddly. I wish I’d had the time to make a seahorse as I had originally planned!

The mermaid was made using various different instructions from the Debbie Brown book, and a bit of free styling. For the tail, I made a long, fat teardrop shape, used a knife to split the pointy end vertically and then flattened the two halves into tail fins, scoring lines with a knife for texture. The scales were indented with the end of a thin drinking straw. I’ve only modelled with fondant once before, and have never taken any classes, so I didn’t really know what I was doing. I had lots of problems! It was very humid, which made it sticky and too soft.

I didn’t really have any idea about how to dry the mermaid in the swimming position I had originally planned, so she ended up sitting perched on the edge of the cake. I didn’t leave much time for drying the mermaid either, and she kind of sagged and leaned backwards so I had to use a few toothpicks to support her.

I used the butter sponge cake recipe from Debbie Brown’s book. The bottom part was two stacked 20cm cakes. I made two batches of cake mixture, tinted one with blue and the other with green liquid food coloring, then dropped random spoonfuls of mixture into the tins to get a marbled effect. The top tier (a ½ batch quantity of mixture) was baked in a large can (from a 800g can of peaches).

The cake board (actually an old drinks serving tray with handles removed) I flooded with teal blue colored royal icing. The metal rim on the tray was helpful with this technique as I could flood all the way to the edges without worrying about it spilling over, but I had some trouble with air bubbles and blotchy colour. It didn’t matter for this cake design though, as it could be hidden with the fondant corals and sea weed.

When the royal icing had set, I assembled the cake. The top tier (the castle) was almost a disaster. After I carved out the arch-shaped opening it started to collapse on itself, so I cut a piece of clear plastic from a clean soft drink bottle to support the archway. I positioned the castle off-centre and to the back, to make room for the mermaid and her coral garden.

I iced the whole thing in teal blue butter cream and added some wafer ice cream cones to make the towers, one whole one in the middle and one on either side trimmed carefully with a serrated knife to fit. The towers were also iced in butter cream.

About an hour before the party I began to attach the fondant decorations to the cake. I hadn’t done it sooner because I was worried the fondant would melt after prolonged contact with the butter cream. Unfortunately I had left the decorations sitting on the kitchen bench on a plate covered with only a sheet of baking paper, for a few days while they dried. When I retrieved them to start the decoration I realized my mistake – the pink and purple decorations had noticeably faded in the sunlight, though luckily the other colors didn’t seem as affected.

I decided to leave the purple decorations as they were, a sort of pastel color, but the pink was very wishy-washy so I painted them with pink gel coloring watered down with vodka (so that the alcohol would evaporate, not melt the fondant and make it all sticky as water would do). I attached the decorations to the board with royal icing, and they stuck to the butter cream without any additional gluing.

After I positioned the mermaid with the toothpicks and a couple of last-minute rocks to hold her up (made from leftover grey fondant from my previous cake), I then added metallic cachous to look like pearls or bubbles. Finally, I attached the candles with balls of soft fondant, and wrapped a band of sequin-trimmed elastic ribbon around the cake board, held on with royal icing and a pin.

I was disappointed that I’d run out of time to brush some lustre dust over the mermaid and shells, but overall I was very pleased with this cake. My daughter and her friends and family all loved it! 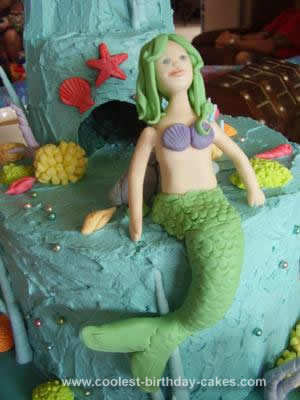 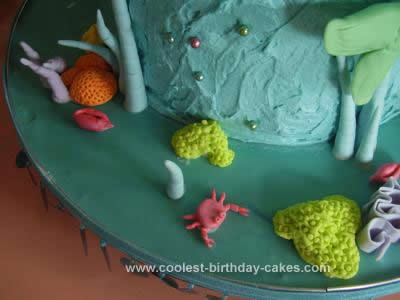