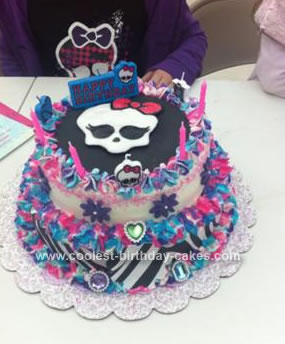 I made this Monster High birthday cake for my God Daughter who is just obsessed with the new cartoon series Monster High. I did a little research online and looked at pics of other Monster High cakes people had made and just some regular girly themed cakes to get some good decorating ideas for the cake.

We found the Monster High candle set at Party City and the rings I got at Walmart on the party supply isle.

I found a recipe online for rolled butter cream which is similar to fondant but tastes much better and that’s what I used to make the skull figure on top. I found an outline online of the skull figure which I printed out and traced with colored piping gel to imprint on the icing so I could cut it out for the top of the cake. I painted the face and bow with icing writers and gel food coloring. I added a little pink shimmer dust to the bow for a little sparkle.

I used zebra print sugar sheets for the bottom tier and a black sugar sheet for the top tier which I found at my local craft store.

I used a marble cake recipe for the cake but obviously you can use just about any kind of cake you want. I made two 8 & two 10 inch cakes for the two tiers. I leveled each cake and then iced each tier in butter cream icing and used Wilton White Decorators icing for the border. To get the multicolored flowers on the border I striped my piping bag with colored icing in the three colors I wanted and then filled it with white icing. You can get a similar result by just striping your piping bag with food coloring as well, I just find this method works a little better.

I made the purple flowers out of the rolled butter cream I had made and just colored it with a little purple gel food coloring. I cut them out with small flower cookie cutters and added a sugar pearl sprinkle to the middle for a little extra something. Then I just added a little bit of pink sugar sprinkles to the side of the top tier for extra color.

I have to say this cake was a blast to make and my God Daughter was super excited over it. I got tons of compliments on it during the party and even since then have had several friends ask me to make it again for their little girls birthdays this year, so I guess it was a success!