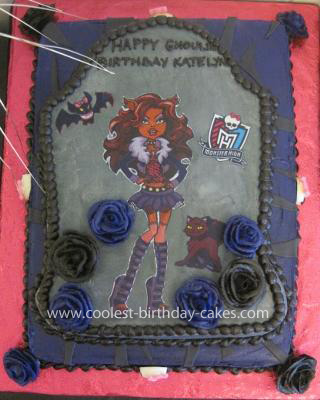 My daughter is a HUGE fan of Monster High dolls at the ripe old age of 5. I made her Homemade Monster High Cake using different elements. I used a tombstone cake pan for the top layer and the bottom layer was just a sheet cake. The top layer was frosted in gray buttercream. The bottom layer was frosted in dark purple with black zebra stripes. I made dark purple and black roses to decorate. I also made some MH logo skeletons and put them around the edges of the cake.

I went to Publix and had the edible image of Clawdeen Wolf, her cat, Crescent, and Draculaura’s bat, Count Fabulous made into an edible image that you lay on top of the buttercream frosting. It will dissolve into the cake like it is frosting. I then used Halloween molds and Valentine’s molds to make the chocolate pieces. I used the skeleton and skeleton finger chocolate mold to make the MH logo skeletons and the skeleton fingers. I made them colorful because the girls are colorful. I also cut out a small fondant bow and stuck them on top of the skeletons head.

I used royal black icing to color in the eyes and dusted them with pearl dust. Then upon the request of my daughter, I added a fingernail to the skeleton fingers. I used the Valentine’s day lip sucker mold to make the fangs. I painted the fangs on with white chocolate and filled the mold with different colors like the dolls lipstick colors. Lastly was the piñata. They do not make a MH piñata so I recreated one from Party City to make it MH themed. I used my printer and photo paper to make the pictures and then glued them onto the piñata.

All in all that party was ABSOLUTELY FANGTASTIC! 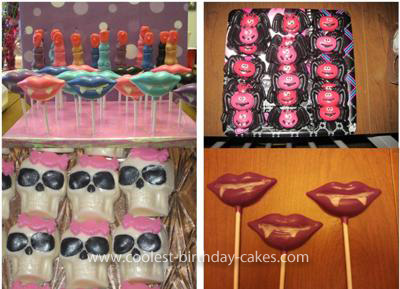 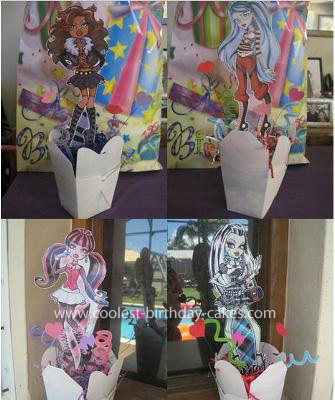 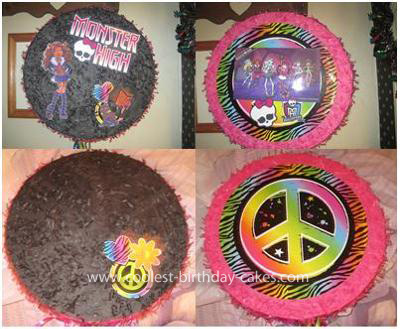