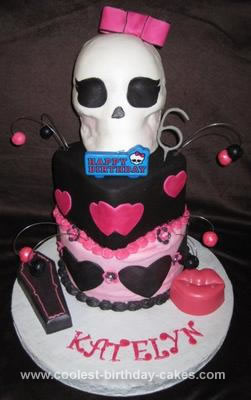 I covered just the front piece of the skull in fondant and then cut out fondant eyes and nose and glued them to the skull. I used gum paste to make the bow and a black food writer to mark the outside of the bow. I then dusted the bow with Cranberry Luster.

I dusted the entire skull with pearl dust. There is a dowel in the middle of the skull to hold it in place. I also dusted the entire cake with pearl dust. I used the cranberry and pearl dust for the pink hearts and used Rose and Pearl dust to sparkle up the black hearts. I used gum paste to make the flowers on the sides of the cake and also to make the balls on the curly q stakes. Before putting the balls on the stakes, I rolled them in edible glitter.

The fang lip box is made of chocolate Meltaways as well as the coffin. I dusted both with rose luster. The fang lip box has X’s and O’s inside it and I placed a small, laminated picture of Draculaura inside the coffin. I made my daughter’s name out of gum paste and decorated it with edible glitter.

I used gumpaste to make the bows and dusted them with cranberry luster dust. I used a foodwriter to outline the bow. I used a lip mold to make the chocolate lollipop fangs. I first used white chocolate to paint the fangs on the mold and then filled the mold with pink chocolate.

After taking them out of the mold, I dusted them with rose luster dust to make them sparkle and shine. In the very back if you can see them, I used a skeleton finger mold to make pink fingers. 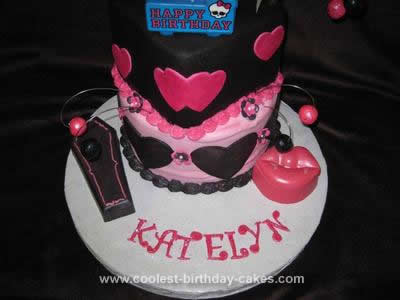 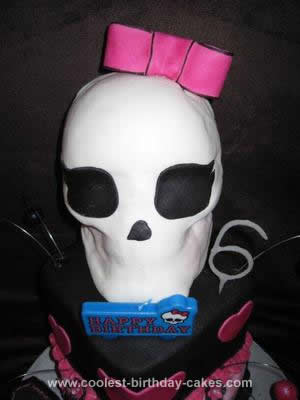