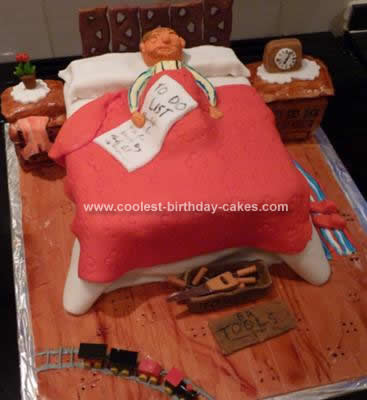 I made this Old Man in Bed Retirement Cake for a mate of mine retiring. The cake itself is Madeira cake with buttercream filling. Although the cake was made in a square tin, I trimmed it to make it more rectangular.

I covered the board in a light brown sugar paste, then used a paint brush to paint on more brown food colouring, and used a tissue to spread out the colouring, giving it the wood effect. A sharp knife was used to cut the board effects. The chests were a number of biscuits covered and coloured in the same way as the boards. All the “wood” was painted with confectionary varnish.

Pillows were of cuts of cake covered in sugar paste. The bottom sheet was ready rolled icing draped over the bed and trimmed. The top blanket is more coloured sugar paste and lightly stamped with a cutter to give the pattern. The old man just shaped to look like the recipient.

I added decorations to match the person’s hobbies, like the plant pot and train from a dolls house shop. Have made variation of the cake using Santa and a Cat