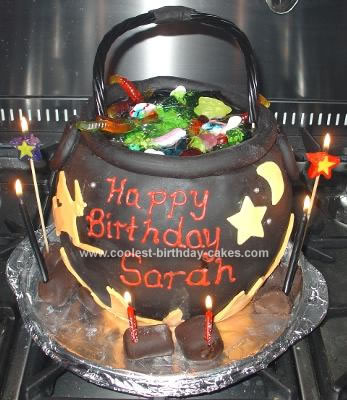 I devised this Witch Cauldron Birthday Cake using some ideas I picked up off the internet and using some of my own as well:

Equipment used (I am a complete amateur so please excuse me if the terms aren’t 100% correct!):

* HINT: The two cakes ultimately fit together to make a ball shape (you could use a “Globe” cake tin if you have one – I used this because it was the best alternative)

*I substituted about half the plain flour (75g or 3oz) for cocoa and added 200g (7oz) melted dark chocolate to get a chocolate cake.

* Mix in melted chocolate (if adding)

(Alternatively, you could use ready coloured icing if you can get it – I can’t!)

Cookie cutters: I used a Star, crescent moon, a witch on a broomstick and a pumpkin (on the back of the cake)

Palette knife – the best way to apply the buttercream icing

Icing smoother – if you can get your hands on one of these – they’re great. They give the roll out icing a really

smooth and shiny finish. I actually couldn’t find mine (!!) but I would have used it if I could have.

Put butter, milk and vanilla into a mixer. Set to medium speed and add icing sugar a little at a time until

mixture is light and fluffy.

* I added 90g melted chocolate to get a chocolate icing

Prepare your cake board. I just used a cake tray and covered it with tin foil. Once my 2 cakes had cooled I first “sculpted” them a bit, taking the rougher edges from the mould off to get the outside smooth. I also tidied up the “bottom” of each cake at the widest part where they would fit together. One cake was going to be the bottom of the cauldron (smaller “side” at the bottom). I placed this on a small saucer as a kind of a stand in the center of my cake “board” to raise it up slightly.

I didn’t “glue” the saucer to the cake board but you could probably use some roll out icing to do this. I found that the weight of the cake was enough to stop it slipping.

I then took the top layer and hollowed out the centre to allow for the jelly filling to go in.

I then placed the trimmings inside the LOWER half of the cake. Then I joined the two halves of the cake together with a generous amount of buttercream filling. I covered the whole cake with buttercream including the inside of the top ring.

Using 1.5 packets of chocolate icing I added enough black colouring to make the covering for the cauldron, the “lip” around the top, a ring for the base, the 2 rings (on on each side), a disc to put inside the top layer (to stop the jelly from oozing through to the bottom layer) and a small piece to wrap around the centre of the handle.

I then measured the height (allowing for some overlap at the top) and circumference of the cake and rolled out enough icing to wrap around the entire cake in one go. I then wrapped the cake in the icing putting the join at the back and putting the overlap over the top and slightly inside the centre ring.

This is where a cake smoother comes into its own to smooth out the “seam” and make the icing look glossy. As I was without my smoother I just used my hands and had gave the cake a lovely massage until it looked as smooth as possible.

Then I made 2 rolls: one for the lip at the top of the cauldron and one to put around the base.

Then the outside handles: 2 small rings. I made a disc slightly bigger than the hole at the bottom of of the top layer which I put into the base of the top layer (essential if you don’t want the jelly to ooze out).

To construct the handle, I used 2 black licorice ropes and inserted a cocktail stick into each one to fix into the top of the cauldron just inside the lip. I then used another cocktail stick to join the 2 ropes at the top and wrapped a small amount of black sugar paste icing around the join.

I then added the flames which I cut by hand from some of the orange sugar paste. I used “lengths” and glued them to the cauldron with my sugar glue mixture. Then the decorations (all adhered with the sugar glue). I used my large pumpkin shape to cover the seam at the back of the cake, put witchy on the front to one side and then added some stars and crescent moons in yellow to the front and back and a few silver balls dotted around.

I piped the “Happy Birthday” message in the gap at the front in basic butter icing (icing sugar, boiling water and a small amount of butter)with red food colouring added.

The “logs” were made from the remainder of the chocolate sugar paste icing which I rolled flat and then rolled back up to make logs which were then cut to length and arranged around the bottom of the cake. These were used to put the candles into.

Finally I made the jelly (1 blue and 1 green the night before which I didn’t add until just before the party. This was spooned into the top layer of the cake and then we added all the lollies and the eyeballs which I made from some white sugar paste icing and then painted with food colouring. I used a cocktail stick and red colouring for the veins.

Last of all, the candles. The cake was a great success, especially to the birthday girl who loved helping me add the jelly at the end (I was quite surprised that we used it all!).