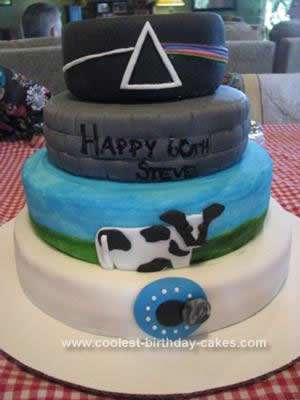 I created this Pink Floyd cake for one of my best friend’s Dad, a man who has been an inspiration and hero to me since I was in middle school, some 15 years ago. He was a major contributor to my love of classic rock, such as Pink Floyd. For his birthday last year his daughter and I came up with the idea to use the many artistic album covers that Pink Floyd used on their most popular albums to create him a memorable 60th birthday cake.

The top tier is obviously Dark Side of the Moon. The second tier is The Wall. The third tier is off of the album Atom Heart Mother and the final, bottom tier is off of the Pulse album. I did a few sketches trying to decide which covers would read best in cake. I had a few challenges since some of the more popular albums seemed extra hard to dedicate a tier to. I even had plans to do the stone faces from Division Bell, but as an aspiring cake artist, sometimes you find that your imagination is greater than your skills sometimes, as was the case with the stone faces. I don’t think anyone missed them in the end, but it’s something I haven’t forgotten and will correctly execute someday!

The flavors of the tiers alternate, with 2 being chocolate cake with vanilla butter cream and 2 were vanilla cake with vanilla butter cream. I baked 2 cakes each of each size, 6 inch, 8 inch, 10 inch and 12 inch. I trimmed all of the cakes down and working with one tier at a time, covered, filled and iced them and then covered them in fondant. The top two tiers I dyed the fondant before covering, black and grey but the bottom two tiers I left white and then went back in with color.

For the Atom Heart Mother tier, with the cow, I used paste food coloring mixed with a couple drops of vodka to paint the background colors. On both the bottom two tiers I made the fondant pieces, the cow and the eyeball and affixed them to the cake with a small amount of water and a paintbrush. For The Wall, I used a ruler to make the indention’s in the fondant after it was applied to the cake and I painted the birthday message on with the same vodka and paste coloring I used for the other paint.

I suggest for anyone attempting this pattern to check your local cake shops or online first though, because I have since purchased the imprint pad with the brick design on it and made my life MUCH easier! They’re very inexpensive too. For the top tier I rolled pieces of fondant into thin snake like pieces and then affixed them to the tier with a small amount of water to create the design. For supports I only used cardboard cake circles in between the tiers, held in place with more butter cream.

I’ve made quite a few cakes in the less than a year that I’ve been working on cakes but this one had the perfect combination of subject matter that I’m passionate about and a client that has inspired so much in me in my life that the only way to pay respect to such an amazing man, from his amazing family was to use the work of amazing artists and a timeless band to pay him back for all he’s given me!

This cake truly was my honor to have gotten to do it. 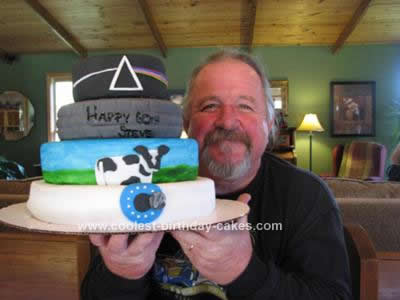 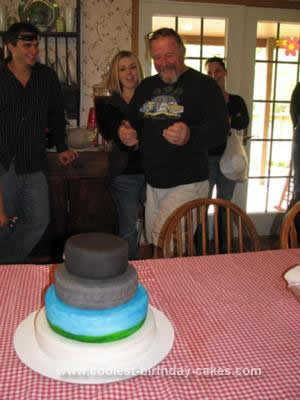