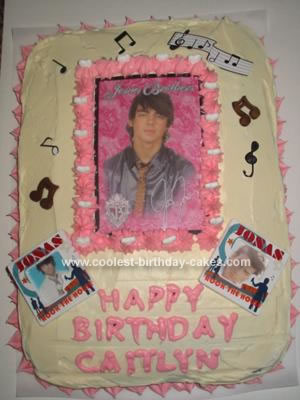 This Jonas Birthday Cake was made for a friend of mine’s niece. She loves Joe Jonas. The music notes are stickers that you can pick up at Target in the photo album isle. The wooded music notes came from a craft store.

The picture was printed out and laminated by my daughter. The small picture frames were bought at Target in the party isle. The cake is chocolate with butter cream icing. The icing was colored with Wilton’s food coloring. There are white candy hearts around the picture frame and those you can buy at either a craft store or at Wal-Mart where all the items are to make cakes.