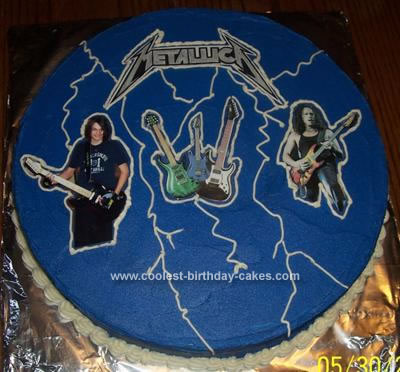 This Metallica Birthday Cake is my son’s 15th birthday cake. He is a diehard Metallica fan and Kirk Hammett is his favorite lead guitarist ever. I wanted to find a way to make a rockin’ cake that he would love and show incorporate his favorite things in life. Music, guitars, Kirk Hammett…

So, I searched the internet for Metallica album covers thinking I could try making an album cover. Nothing truly suited the situation except for their Ride the Lightning album. I figured I could adapt that album cover to suit him. I gathered pictures of my son standing up playing guitar, a picture of Kirk Hammett in concert, some cool looking guitars and also the Metallica name (all from the internet). I cut around the edges and then laminated them. I bought a roll of laminate from Walmart for just a few bucks.

This is probably one of the simplest cakes I have every made. I baked a 14 inch round cake using a store bought butter recipe cake mix. I used a homemade buttercream icing which I dyed dark blue. The Ride the Lightning album cover was a dark blue with lightning coming down around an electric chair. I just wanted to make it look like my son was on stage rocking with his favorite guitarist. I spread a bit of frosting on the back of the laminated pics to help hold them in place on the cake and then used a #3 tip to pipe around the edges to further hold down the pics.

Then, I free handed the lightning (though I referred to a printed picture of the original album to help guide me a bit.) Then, I piped on shells (using a #18 tip) along the bottom edge and left the top alone so it would look more like an album cover.

My son and his friends absolutely loved the cake! I had many compliments on this cake and now his friends want me to make their birthday cakes. When we set up for the party, I kept it simple by using just blue and white balloons and a few (blue and white) streamers in the shape of an X above the table. I kept it simple like the cake. The only thing extra I did was make homemade invitations in the form of concert tickets announcing his party. He loved the concert ticket invitations!! I was able to put together his party in a day and half which included baking the cake and decorating it.