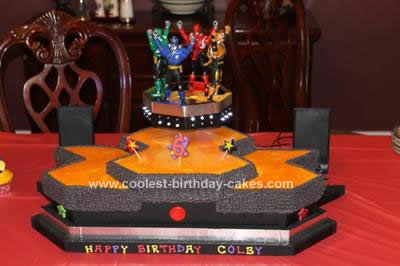 This Power Rangers birthday cake was for my son Colby. He wanted a Power Rangers cake and cupcakes for his party, so this is what I came up with.

I started by constructing a base for the cake made of wood in the shape of the Power Rangers logo. It was painted black with chrome tape and foam stars around the base. I also used foam letters for the birthday message on the front. The octagon wheel on top was also made of wood and painted black with colored spokes, to match each toy ranger attached to the top.

The wheel has six leds installed in each of the 8 sides (3 white & 3 blue) which alternate flashing around the wheel. The wheel rotates slowly via shaft connected to a disco ball motor located in the base. The base also contains a voice module with a recording of the Power Rangers theme song along with a special birthday wish from the “Red Ranger”.

Colby loved the message and had to play it for everyone. The voice module is made for greeting cards and I recorded the message on my computer and downloaded it into the module. The module is not very loud so I connected it to a set of computer speakers and installed a big red button on the front of the base which activates it.

The cake was cut to shape in 3 sections (left, right and center). Left and right is chocolate and center is white. The icing is homemade butter cream colored gold and black and the cake is just a box mix. We used the same cake for the cupcakes but went with a can vanilla icing which was colored for each ranger and heated a little to allow dipping the cakes for the glossy look.

After dipping I stuck the cupcakes in the freezer for a couple of minutes to set up. Each cupcake was topped with a Power Ranger ring of the same color. 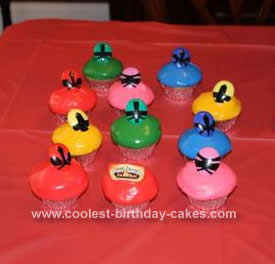