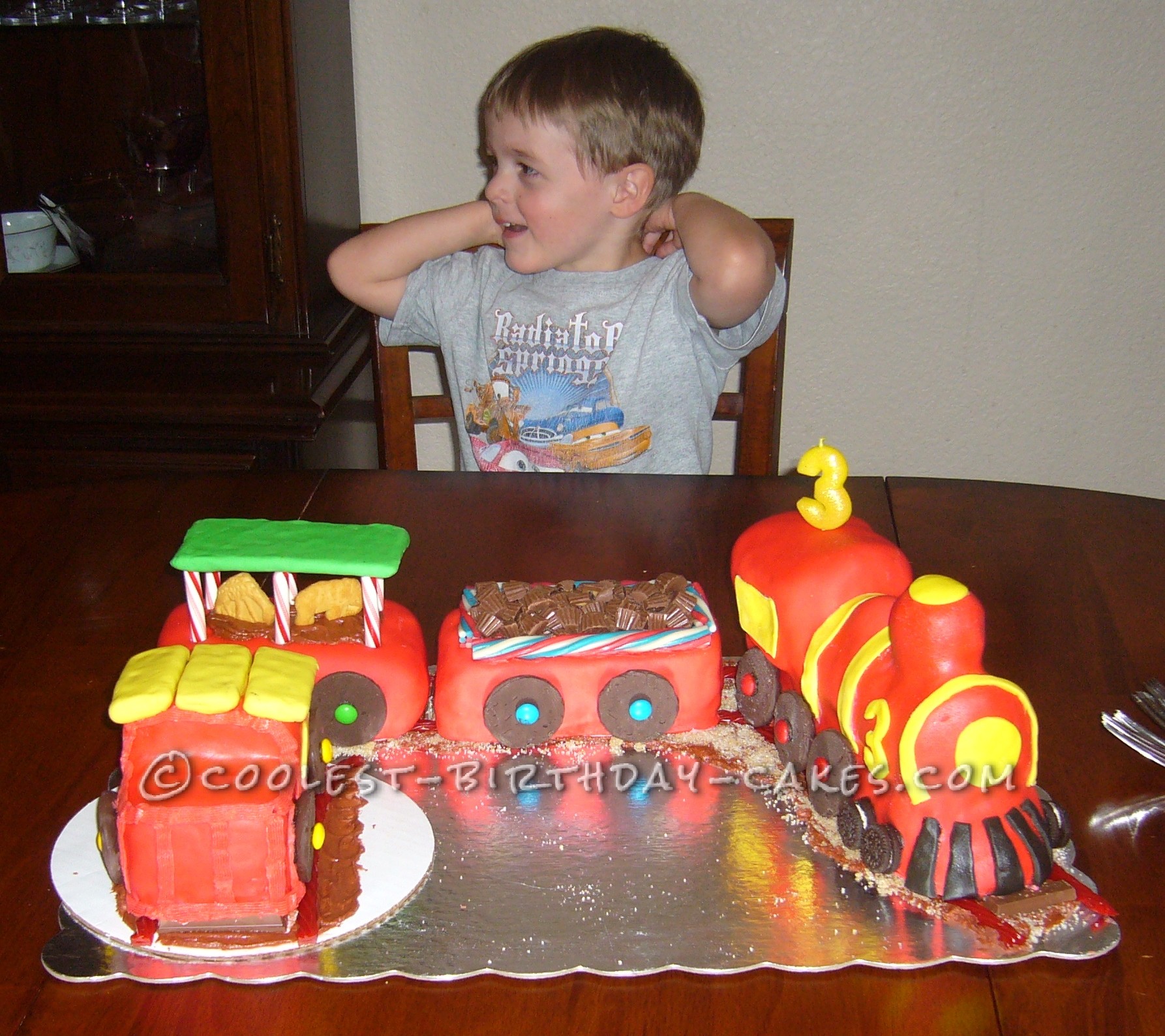 My son is a huge fan of trains. That’s nearly all he plays with. After searching this site for train cakes, I decided to get the Wilton train engine cake pan. I searched everywhere for an example of a train cake made with fondant with no success, so I decided to wing it. I’ve made several cakes with the marshmallow fondant recipe at allrecipes.com and it always tastes good and looks great, so I figured why not. To me, fondant is actually a lot easier than piping all that frosting and it looks much better than anything I can do just spreading frosting on the cake. And if you add enough almond extract and a little salt to tame the sweetness, the homemade fondant tastes really good, too!

I baked the engine cake in the Wilton 3D train cake mold and made two 8” x 8” square cakes for the cars. I cut both square cakes in half to make four rectangles: two were the middle train cars; a third was the base of the caboose; and from the last I cut a small section for the top of the caboose. The rest of the last cake was unused. To cover the engine, I used half inch thick fondant as I’ve found it is much less likely to tear when you are manipulating it than thinner fondant. I applied the fondant in two pieces (front and back) over a crumb coat of butter cream frosting. I later covered the seam with a yellow strip of fondant. The smaller pieces made putting the fondant on the cake much easier than I expected. After the first fondant piece was in place, I cut the applied piece in a straight line with a sharp knife where I wanted the seam. The second piece was then applied and cut to meet the edge of the first piece. The other train cars were covered with single pieces of fondant.

All of my decorations were attached with the same butter cream I used under the fondant; (I know they say you should use royal icing – but I don’t like the taste of it, and I haven’t noticed that it makes much difference for simple decorations.) The wheels were chocolate covered Oreos with M&M’s in the center. The small wheels on the front of the engine were mini-Oreos. I used yellow fondant for all of the decorations on the engine and I learned that you should use either white icing or the lighter of the two colors of fondant you are attaching.

For some reason I decided to use red frosting to attach the yellow stripes… bad idea. The frosting did not want to stay on the correct side of the yellow fondant. Oops. The second car has a multi-colored licorice twist border filled with broken up mini-Reese’s peanut butter cups for coal. I froze them first so they would be easier to work with. I put a layer of chocolate butter cream beneath the “coal”, so any gaps wouldn’t be noticeable. The third car has strategically broken candy canes holding up a fondant covered graham cracker roof with animal crackers underneath. And the caboose, much like the engine is just decorated with yellow fondant, with the roof being three fondant covered graham cracker quarters. I piped red butter cream on the caboose to outline it.

I did put tracks made from red licorice and Kit-Kats and chocolate butter cream and brown sugar “dirt” under the train, but I misjudged the size of the cakes, so the tracks are completely hidden under most of the cars.

Drew was absolutely thrilled with his train cake. He still talks about it almost two months later. And mysteriously, though Drew’s favorite color had been red for quite some time, shortly after he saw the train cake he decided that yellow was is “second favorite color”. So I guess he approved of my color choice.