Each birthday my children pick the flavor of their cake and the shape of their cake.  Thanks to great ideas from this web site, most of them have been successful.  This August my son turned 9.  He chose a train cake.  I immediately wanted it to be a 9-car cake.  He requested poppy seed cake and a cookie cake, and of course chocolate frosting and no one complains that they are made with whole-wheat flour.

Most of my projects are managed with lots of my little helpers including my 9-year-old son.  I gave into the less stressful but longer project of letting him help.  It was HIS cake any way to celebrate HIS 9 years.  So often I get caught up in making it MY project.  He loved it and when we were done kept saying, “That is such a fancy cake.”  What mom wouldn’t be happy with her birthday boy thrilled with the cake! It may not look the greatest, but to me that was success!  It was great!

The cookie cake was a simple recipe using chopped cream sandwich cookies.  I cooked it in a 9x 13 pan.  Once it cooked and cooled, I cut the cake into 8 rectangles, and you guessed it—those made 7 of the 9 cars.  I used a simple chocolate butter cream frosting for the glue and most of the cars.  The poppy seed cake was left over from another family dinner; I just added a lemon glaze.  The poppy seed cake was cooked in mini loaf pans.  Three mini loaves made the engine and caboose, both which were designed by my son to making sure the cake looked like a train.  The third mini loaf I used to cut up for the shape of the engine and caboose.  Of course OREO cookies were the wheels, I was instructed that the Engine had to have 6 wheels.

Here are the 9 train cars:

1) Poppy seed engine, quartered OREOs for the smoke stack.  Used chucks of the third mini loaf to make the engine room and stuck them on with toothpicks.

2) Oozy red cookie cake car.  I have some Lego candy molds I used to decorate cup cakes for his birthday a year ago.  I had left over candy to melt so I thought I would use it up this year.  I tried to add cherry flavoring, ruining the melting ability of the candy.  Then I tried to rehabilitate it with water, and it was a disaster.  I was going to throw it out, but my hubby liked the flavor of the candy.  So instead of cute red Lego candies, it was oozy gooey run all over the place cherry stuff—NOT what I intended.

3) Cheerio car.  I stacked 2 of the 8 rectangles together for some height. With frosting the cheerios stuck easily.

4) Green Lego car. Again, I attempted to add mint flavor, which ruined the candy melts, you would think I would have learned the first time.  The green I was able to mold and they hardened in the fridge, but not with the desired smoothness or quality I would have liked.  But it is all for the look, right?

5) Candle car—the kids thought it was too easy to blow out.  So in the end, each car had a candle giving the train a much cooler effect when the candles were lit.  Then of course each of my children took a turn blowing out the candles on the entire cake (family birthday tradition that everyone gets a turn).  So much for my attempt at keeping all the germs contained on one car.

8) The Matthew car.  This is the car my son chose to decorate.  I thought he got out decorating pens, but instead it is straight gel food coloring.  I should have guessed when his fingers were turning bright colors that turned the sink all different colors as he washed his hands.

9) The caboose with poppy seed cake.  I cut 1/3 of a mini loaf to make the top of the caboose and stuck it down with toothpicks.

So here’s to my nine-year-old boy!  This is our cake with all the mishaps and everything.  And despite it all, he still thought, “That is such a fancy cake!” 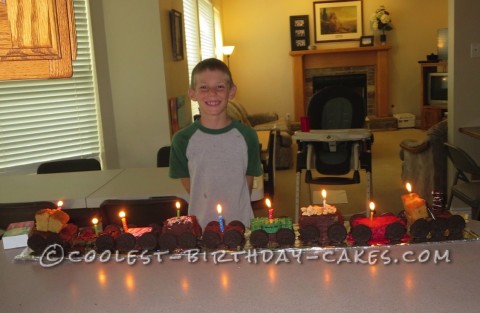