For my son’s second birthday I made him a train cake since choo choo is what he says most. This was the first decorative cake I’ve ever made and everyone loved it. I like my boys to have a small toy they can keep after eating the cake as a keepsake, so I wanted a toy train and the cake to be the scenery.

Assembling and Decorating the Train Cake

Prior to assembling the cakes, which I let cool for a few hours, my 2 year old decided to sample the base layer so I had to fix that side. I shoved some of the scraps into it and very carefully frosted and assembled all four cakes using homemade blue butter cream frosting and then let it sit in the fridge overnight.

I added more blue frosting to smooth it out in the afternoon and using homemade fondant dyed in two shades of green rolled out hills. It was a very interesting process because as I was putting my hills on the cakes my 4 year old kept grabbing my hands to move them so he could see and hence, the big crinkles. I figured since it’s for my kids, the kid causing errors made for fun memories and added character to the cake.

Next, I cut out a yellow circle and “sun rays” for the sun out of fondant, green trees, rolled balls of white fondant for clouds, red for the tree accents, and rolled some brown and twisted a few together for the tree trunks and branches.

The animals were my favorite part. I made all of them out of fondant, pink for the pig, and brown for the horse. The sheep was the hardest. I couldn’t figure out the black so I colored a white face black with edible marker and attached little white balls for the cotton around the sides and bottom. Before attaching, I made a brown fence which I scraped with a toothpick slightly to give more of a wood look. Then I attached the animals on the fence.

For the tunnels I used brown fondant painted black with food coloring and then rolled little balls of white and colored them with black edible marker to not be completely even to give the look of stones.

I made flowers out of orange and yellow fondant with tiny circles I cut little slices and pinched the strips together to be flower petals. I added a tiny ball of the opposite color in the middle. Before attaching I used a green store bought frosting with tip to go around the base of each cake for grass. Then, I attached flowers around the base randomly.

For the train track I used chocolate wafers which I cut thin with a pizza cutter and pulled apart to only be one layer. I placed them around the top of the bottom cake with a couple coming out of each tunnel on the cardboard base. I should have covered that with green paper instead of leaving it white before wrapping, but I forgot to until it was too late.

I used a tube of black gel frosting around the train tracks and waited until his party to add the train.

I put two shish kabob sticks in the cake to keep it from sliding.  The only thing I would possibly change would be to use a 5 inch pan instead of a 6 inch one because there wasn’t much difference in size between the cakes for my train. I had barely enough room to pace it. 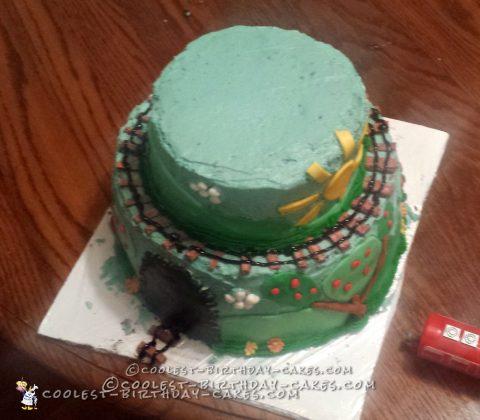 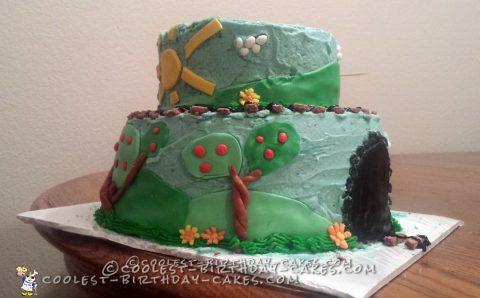 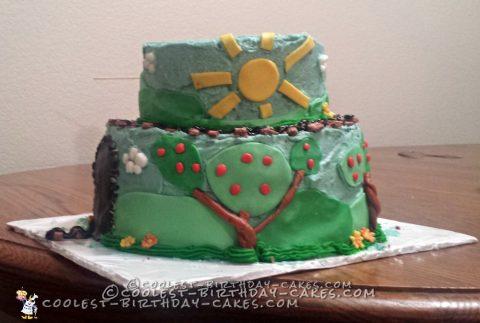 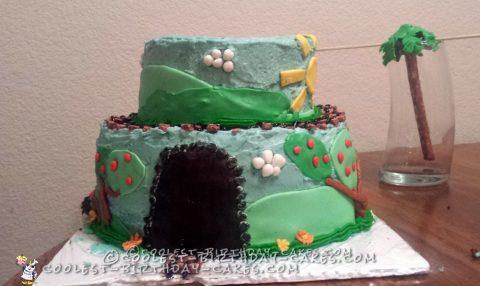 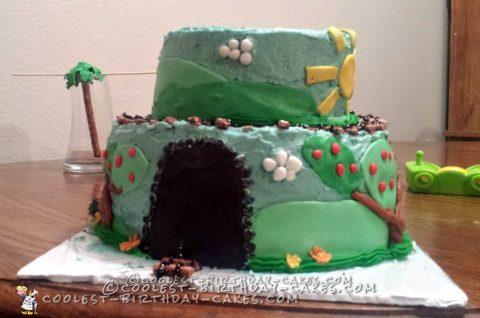 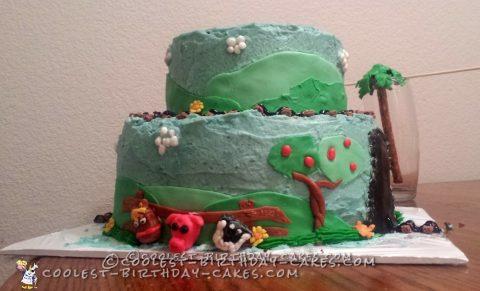 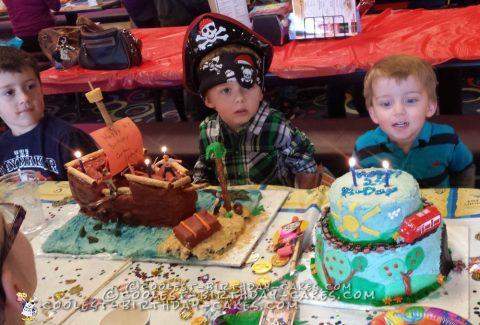