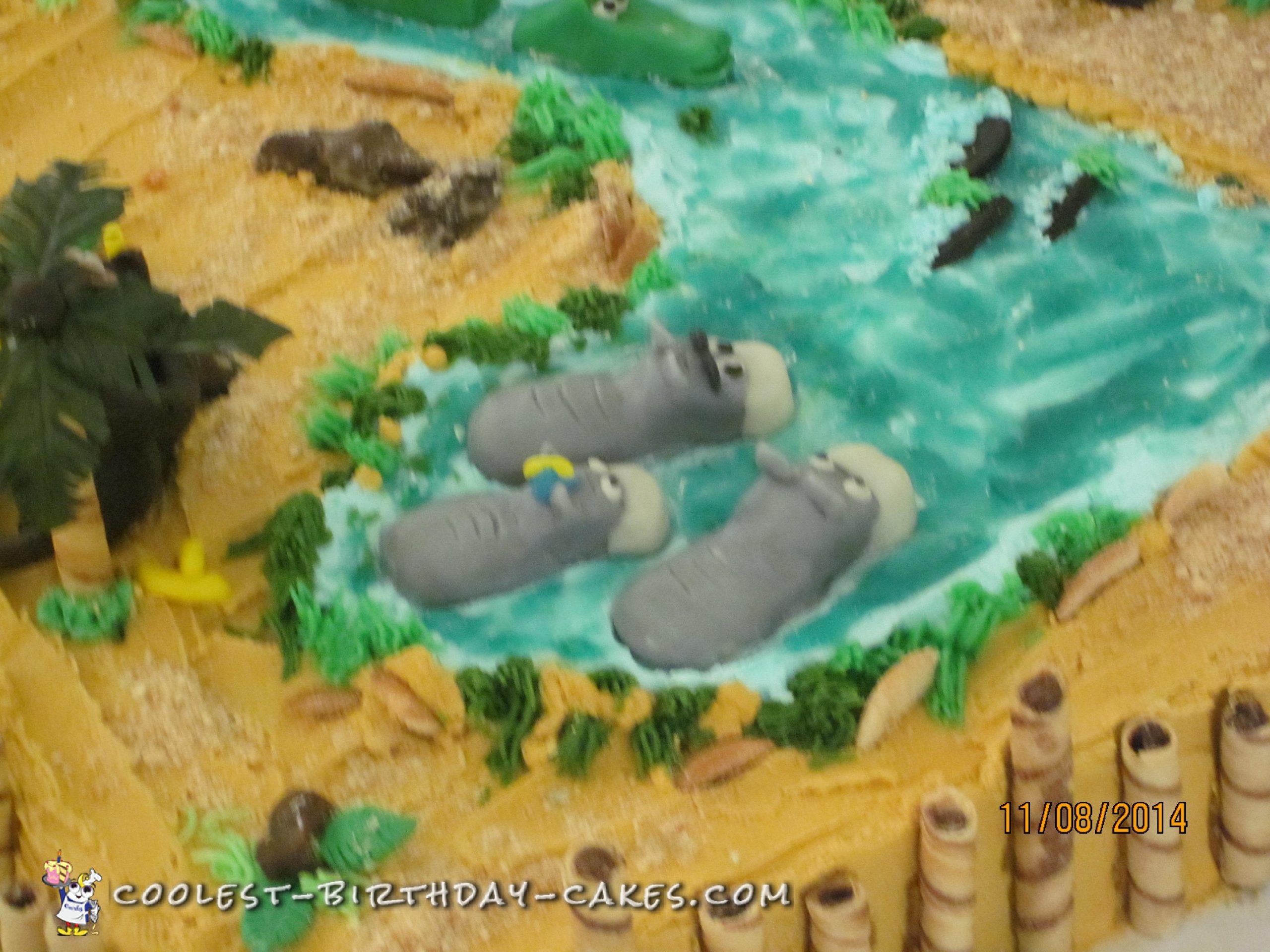 My Safari cake is my own creation that was created for a young mom who was pregnant with her first child and her family was giving her a baby shower. Three yrs ago I did her wedding cake and I am still making cakes for her and her family when they need something unique. A year after her wedding she tells me she is pregnant and I was very happy for her. Three months before her baby shower she calls me to see if I would do a Safari cake with animals like Zebra, Elephant, Giraffe, Monkey, Lions, and so on. I told her yes so we talked about how many guest, the type of cake, sheet or tiered. All the questions you should ask if you’re making a cake.

She wanted a 3 tiered marble cake with butter cream frosting. So I sat down with pencil in hand and started drawing out what we talked about. After getting my ideas on paper ready to send to her for approval she sends me a photo of a 3-tiered cake with the animals on it with a waterfall, trees, and rocks. Thinking to myself this will be easy. I was wrong. She now wants a half a sheet cake (not a 3-tiered any more) with everything she showed me in the photo. Ok I thought, so back to the drawing board I went.

Now in between the thought process I get another message about the cake. She is having a double baby shower for her sister-in-law who is having a baby the same month. Now the guest list has grown and so must the cake. Ding Ding went my message on my phone. Message saying she and her sister-in-law wanted Three – Dimensional Animals not the flat ones, the cake has to be a Zebra design inside not marble.

Now it is the end of the month of the three months she gave me. Oh they had to up the date 2 weeks sooner, which made the date closer to the beginning of the month and not the end because of family coming in. My thoughts are to make a full sheet cake for the base, an 8-inch square to attach the waterfall to.

I am thinking how crazy is this and what have I gotten myself into! Three-dimensional animals, 8” square has to be a Zebra cake inside, waterfall coming down from the 8” to the full sheet cake, can we say “OH MY”. I called her to let her know what my idea was again, and surprise again; the sheet cake had to be half marble other half chocolate. Now my head is bobbing up and down, like one of those dogs that people would put in their car window.

Making Modling Chocolate for The Animals

Now I have one month to figure out what to be make these animals out of. I’m not one for fondant, only because of the cost and I wanted something that flexibility if I had to reshape the animals. In my cake decorating ability I have made chocolate candy that I have placed on cakes for decorations. I am thinking to myself, how can I incorporate chocolate into a 3-dimintional animals? I did a lot of researching late at night on YouTube for making small animals out of chocolate.

I found a sit for making Chocolate Modeling Clay that showed me how to coloring it, and shape it into what ever I wanted to make. For all you chocolate candy makers out there we all know what happens if we temp chocolate for to long. My first batch did not turn out at all. It was like beating whip cream then, Oh My; you went to far now you have butter. See with Modeling Chocolate you temp it very, very slow until it melts. When it’s melted you add Karo Syrup and water (yes water).

Now the tricky part is folding the Karo Syrup and water into the melted chocolate. If you fold the chocolate to long then the chocolate breaks down into a oily mess and you can not use it. Like I said before, it’s like making whip cream, you cannot over mix it. So I finally have everything mixed, the chocolate is holding together, it’s almost like working with fondant. You wrap it up in plastic wrap and let it sit overnight.

In the morning I was so excited, I wanted to see if the chocolate was still together or a pile of oil. Yes, it was still together, now you knead the chocolate to make it smooth. It’s the same process as if needing bread dough, now its time to playing. I love playing with my food especially now, because when I was younger my mom would get after me for playing with my food.

My first animal was the Elephant that took me a day. Oh, I thought the other animals are going to be a piece of cake. Ha Ha. It took me the rest of the month to make each and everyone of the animals for that cake. My husband and I had planned a trip up north for a long weekend. We went on our trip all right, along with all the animals packed in a cooler so they would not melt. Each and everyone I put as much characteristic in them just as if they were alive. Making the strips for the Zebra, and Tiger, giving the snake a tongue, to a Beanie on the baby Hippo.

The monkey holding the bananas was the big challenge. I could not get his mouth just right. I was getting so frustrated at it that, a friend of my sons was spending the weekend with us. Knowing I was getting so upset with this one he asked if he could help. I told him I was struggling with the mouth. So when he asked me to look at him, he had put the palms of his hands together to form a mouth with his fingers.

Then he proceeded opening his hands like the mouth making monkey sounds. I laughed so hard I for got how upset I was with making this animal. But with his interpretation of the monkey I finally made the monkey you see on the cake.

Steps in Pulling the Safari Cake Together

8” square cake is on 8” cake plate with pillars to support it.

Setting the Stage For the Animals

Now is time to place the animals in there spots. The monkey just chilling under his banana tree eating his favorite food while the Zebra and Elephant watch the Hippo family taking their young son for an afternoon swim. Tiger sitting on his favorite rock under a palm tree staying cool but keeping an eye on Mr. Crocodile to make sure he stays upstream from the Hippo family. Giraffe and snake just enjoying the hot afternoon sun looking at all their friends having fun. While on top of the hill is the King of the Jungle. Mr. Lyon is making sure everyone and everything is at peace in his kingdom.

When I finally had the cake setup for my friends baby shower everyone was so amazed at all the details that I put into it. The mother to-be was in tears. She did not expect anything like the cake I made for her. Her mother-in-law came up to me and said I should enter this cake in a contest. So I’m doing just that. I must apologies for the poor quality of the photos. I left my camera at home so these are taken off my old phone. Thank you so much. This was a very fun cake for me to do and I learned a lot about different ways to present my work. 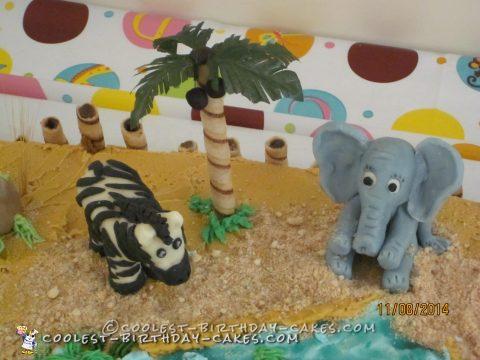 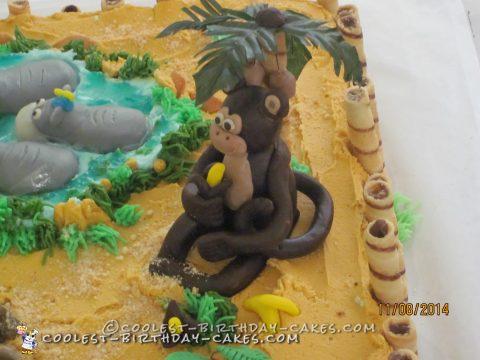 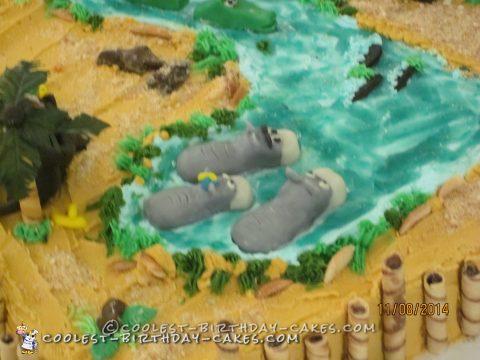 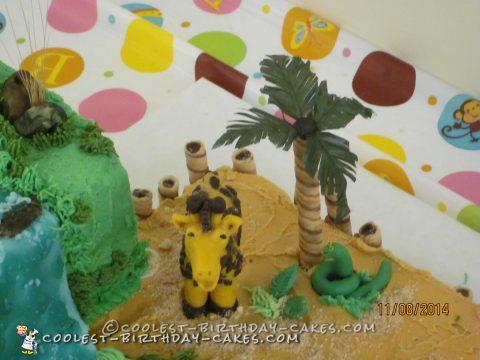 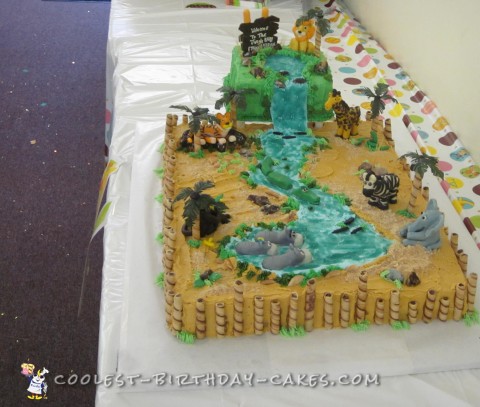