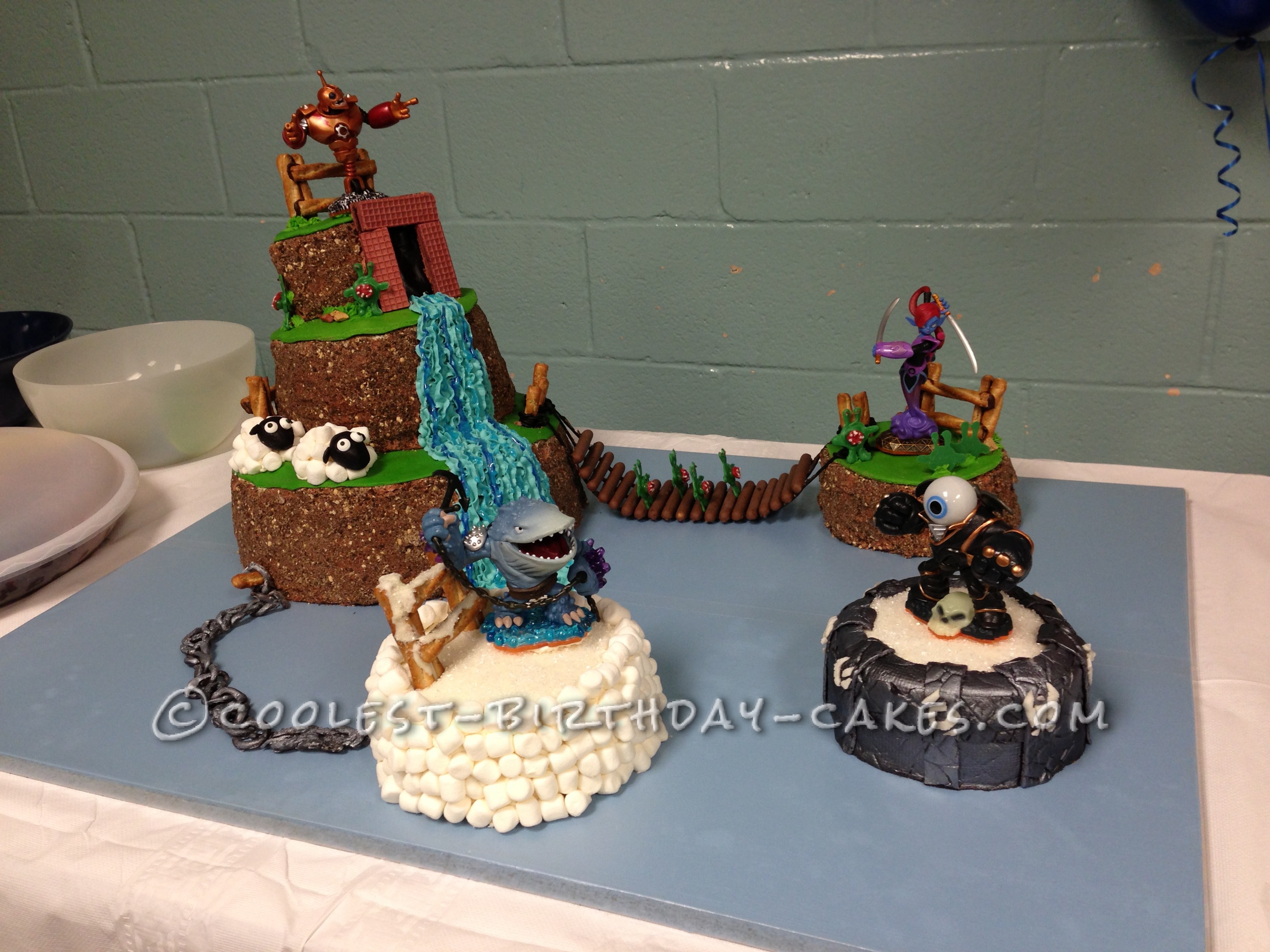 I used to be a cake decorating show addict (Food Network Challenge, Ace of Cakes, Cake Boss, etc.).   My husband used to make fun of me because I don’t cook and I don’t bake, but I would watch these shows incessantly.  Those who can’t do, watch others do on TV!  Then I had kids and #1 stopped having time to watch cake decorating shows, but #2 wanted to make awesome cakes for my kids.  I remember when I was little my mom had a stand up bear mold and she made that bear in to so many different things for my sister and I.  It was always the best part of my birthday, and I wanted my kids to have the same kind of memories.  First let me say I have no training of any kind.  My mom knows how to do a few different piping techniques of butter cream and has shown me a few of those, but other than that I am a complete novice.

Every year I have my kids tell me what type of cake they want, and then I head to the internet for inspiration (and directions!!). I have gotten such great ideas and techniques from this site.  So when my oldest son told me he wanted a Skylanders cake, I immediately came to this site to take a look. I knew I wanted to do a “scene” from the game, and found tremendous cakes on here with fabulous ideas! 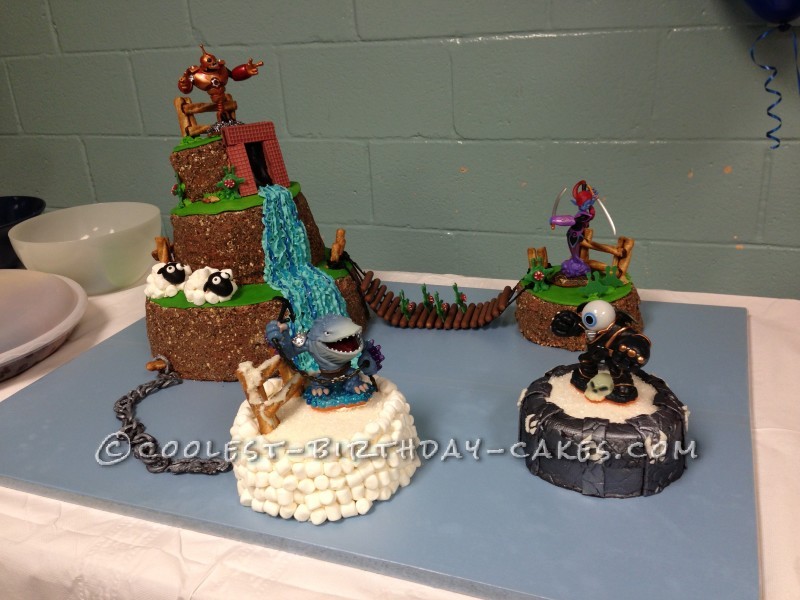 I am a mom who works full time, and so often have trouble fitting in the time for everything I have managed to dream up for a cake.  So I will say the secret to this cake is to do everything ahead of time that you can.  Two weeks before the party, I made the Chompies. I followed the directions from another awesome cake on here and hand piped the bodies with green melting chocolate (just drew a template on a sheet of paper and slid it under wax paper. I then put a red jelly bean in the middle and painted on teeth with melted white chocolate on a toothpick. Melted milk chocolate dots completed the eyes.

After they were completely dry, I sealed them in airtight containers and they were fine for two weeks.  A week before the party, I made my fences, bridge, fondant, sheep heads, and “dirt”.  My fences were pretzels “glued” together with melted chocolate.  In one of the side games for Skylanders, the Giants compete in an ice bowl, so I decided to have an ice island floating in my Skylanders universe. For these fences, I assembled them with melted white chocolate, then drizzled white chocolate over the tops and topped it with clear sprinkles for some shimmer.  My bridge is made out of licorice laces and Cadbury Fingers. I laid three laces out on wax paper (tried two, but bridge was too unstable) and glued the Fingers on with melted chocolate. I then tied both ends to the same pretzels I used for my fences.  I do make all of my fondant from scratch.

It is marshmallow fondant (with a recipe I found online) and is super easy to make (though super sticky to work with).  I made black fondant for the sheep’s heads (make sure you use a recipe for chocolate fondant, or you will never get a true black color).  I simply shaped the heads and ears, attached candy eyes, and let them dry.  I then made batches of dark grey, green, and white fondant.  After making, I coated them in Crisco, wrapped in cling wrap, and put in the fridge.  It lasts up to a month.  To make the “dirt” I took regular animal crackers and chocolate animal crackers in a Ziploc bag and crushed them with a mallet (my son helped me until he got tired of pounding…).  I sealed everything in airtight containers and they were fine the next week for assembling the cake. 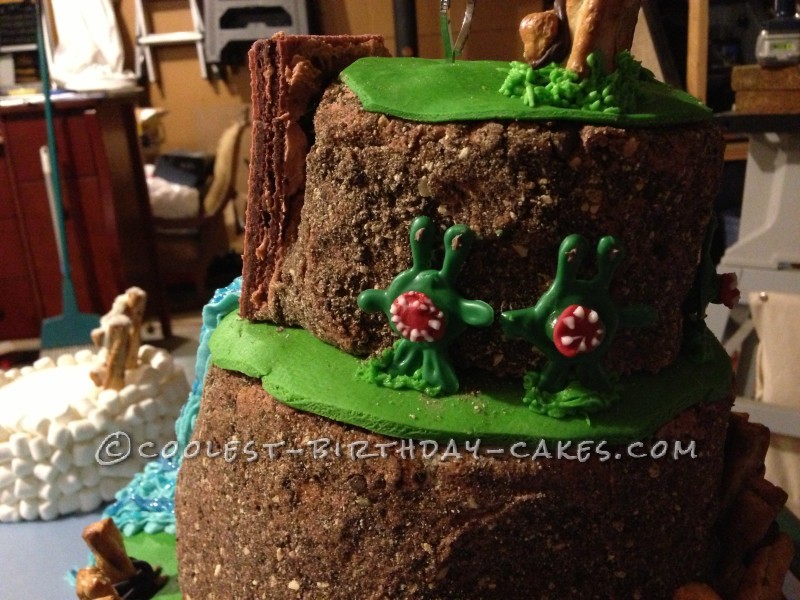 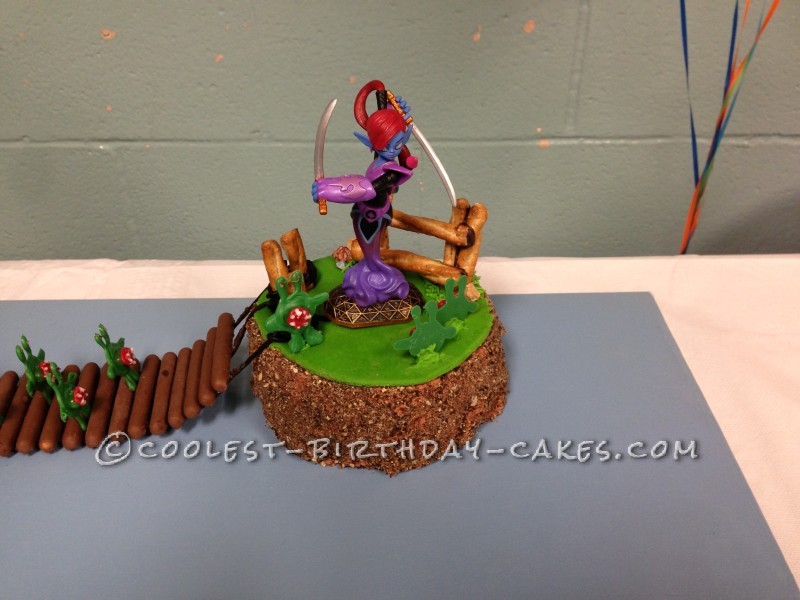 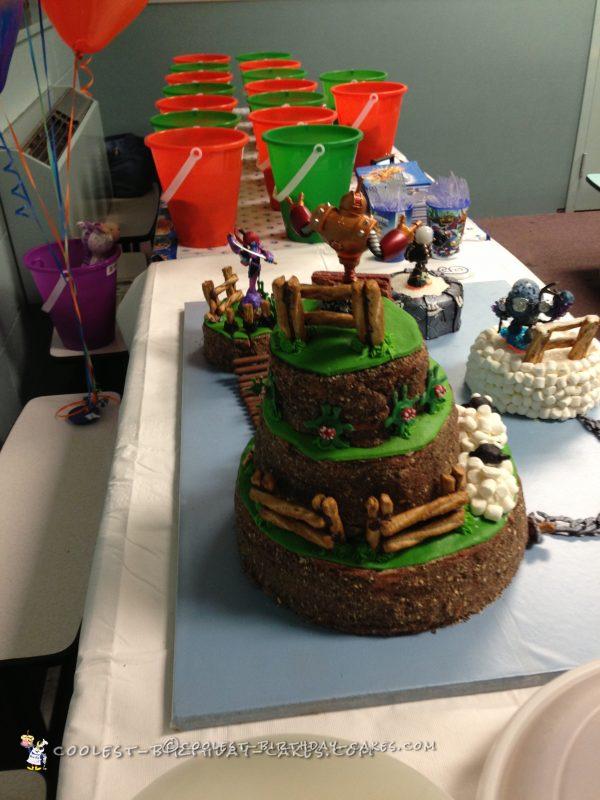 The Icing on the Cakes

The night before the party is when the really chaos begins.  My mom brings over the cakes I asked her to bake (did I mention I don’t cook…) and butter cream icing.  I had asked her to bring white, green, and brown icing.  Each cake is at least two layers of cake, so my mom had baked about 10-12 cakes in varying sizes.  We use the same cake for his friends party and the family party, so it has to go a long way.  I will say there was still a bunch left over this time, though.

I started by icing each island and each step of the mountain individually.  I then used my hand and applied the “dirt” mixture around the outside of each layer.  Make sure you do this far away from all of your other materials, as it is a mess and you don’t want to contaminate anything else.  I then rolled out the green fondant and used the cake pans as a rough guide to cut a round piece of fondant for the tops.  I stacked the mountain originally with no support inside.  By a few hours in to the night of decorating, it had already started to lean, so I unstacked and inserted drinking straws all three layers to give it some stability.  After finishing the “green” islands, I rolled a piece of white fondant for the top of my ice island, covered the sides in mini marshmallows, and put clear sprinkles on the top for shimmer.

Next, I moved on to the waterfall.  I did not cut a path out of the cakes for it to fall over (quite frankly I forgot too and was too tired at that point to go back), so I just used the blue icing with a star tip to cascade down the side.  I then took light and dark blue sparkle decorating gel to try to give some movement to the water.   The door is a small piece of black fondant and chocolate wafer cookies.  I then put on my fences, and piped some green icing with a grass tip and placed small chocolate rocks and Chompies.  I attached one island with my bridge.  Another facet of the game is that the Giants are so strong, they pull other floating islands over to them using a chain.

So I made a chain out of black fondant (rolled out snakes, cut them, and made individual links). After this was dry, I sprayed it with metallic sugar spray. I attached to the cakes using the pretzels. Next were the sheep.  In playing around, I literally just put a blob of white icing on the cake, put the head on, and squished mini marshmallows in to the icing. They were most everyone’s favorite part and were fought over when we went to cut the cake. Because the portal is such an integral part of the game, I did want to include it. I cut a circle of white fondant for the top. I then rolled out the grey fondant for the sides. I got a mold from Michael’s to create a stone pattern, although you can also do it just using a knife. It wasn’t “popping” enough, so I used the metallic spray on it and voila – it took on a new life.

I wrapped that around the sides and cut off the excess.  I then cut six small strips for the where the symbols sit.  I did my best mimicking the symbols with white fondant (but at that point it was about 2 AM, and who was looking that closely anyway?).  The next day we transported it to the party and I finished it off by putting the actual game figures (washed of course) on the cake. 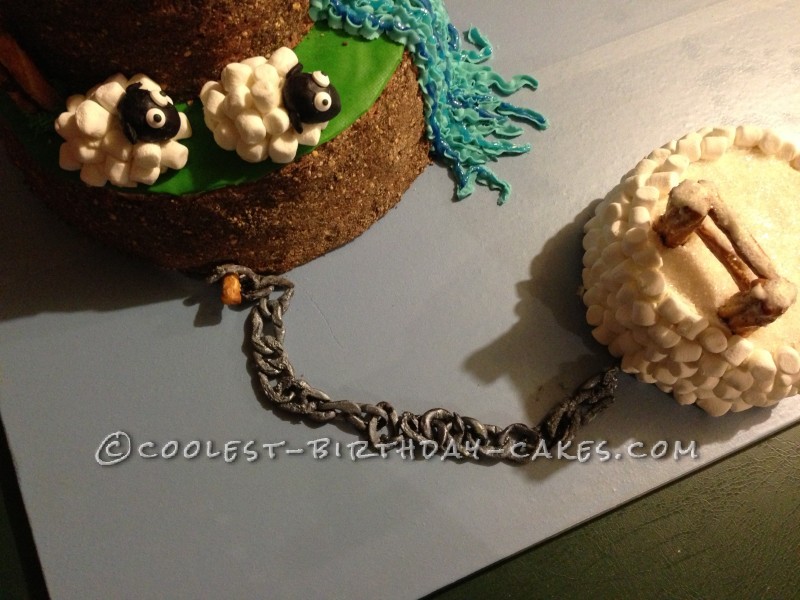 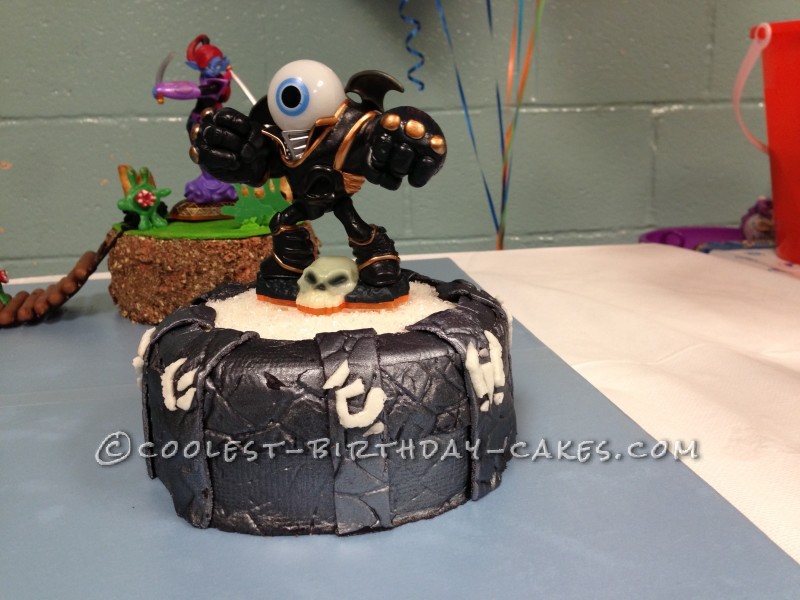 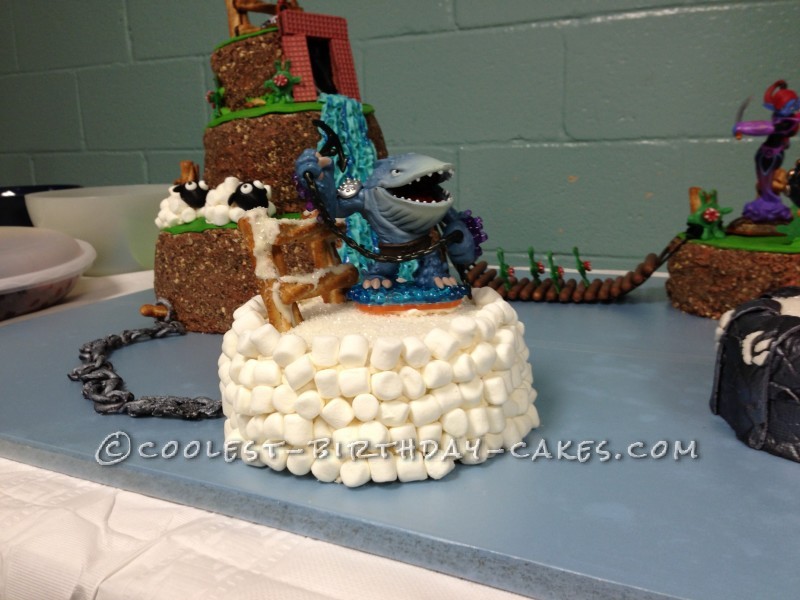 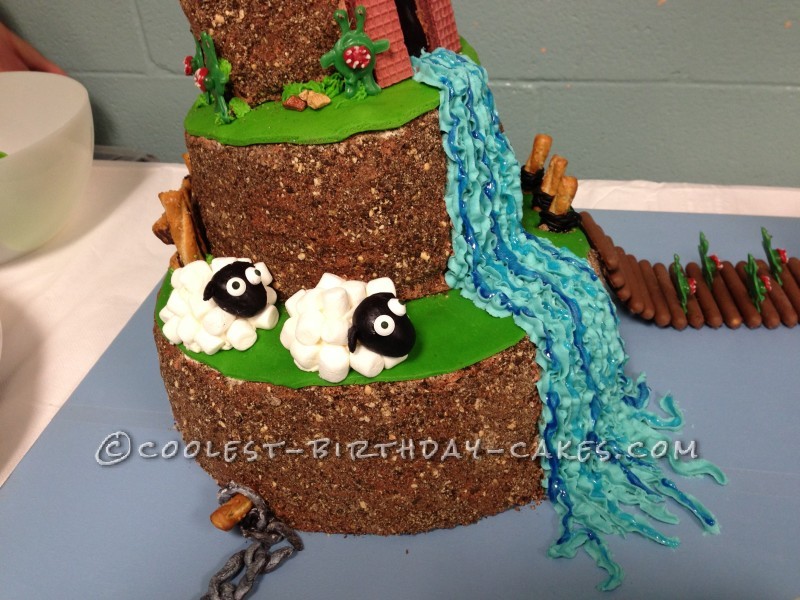 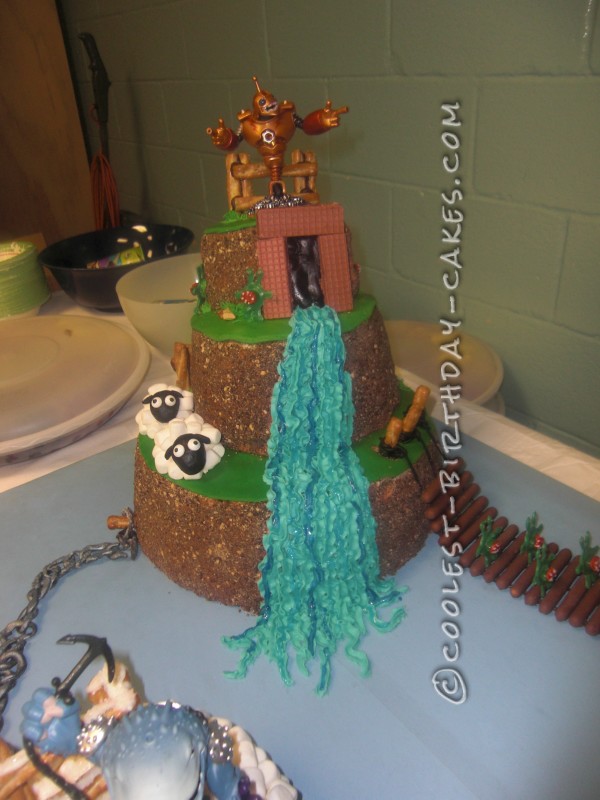 The look on my son’s face when he saw it was priceless!  The amazement and excitement made all the hard work worth it.  He sees the pieces as I am working on it, but doesn’t see the finished product until the party.  The party was at a bowling alley, and he kept dragging everyone in to see the cake before they were allowed to bowl.  One of the mom’s in attendance told my husband “I thought we were doing great with (her daughter’s) cakes, but I guess not.”  I told her – none of this was hard, you just have to be as crazy as I am to actually do it.  Seriously, I would not want to do this more than twice a year for my sons, but the reactions I get from them, the hugs and the kisses, and knowing it is something I can do to make them feel special that they will always remember, is payment enough to last me a lifetime! 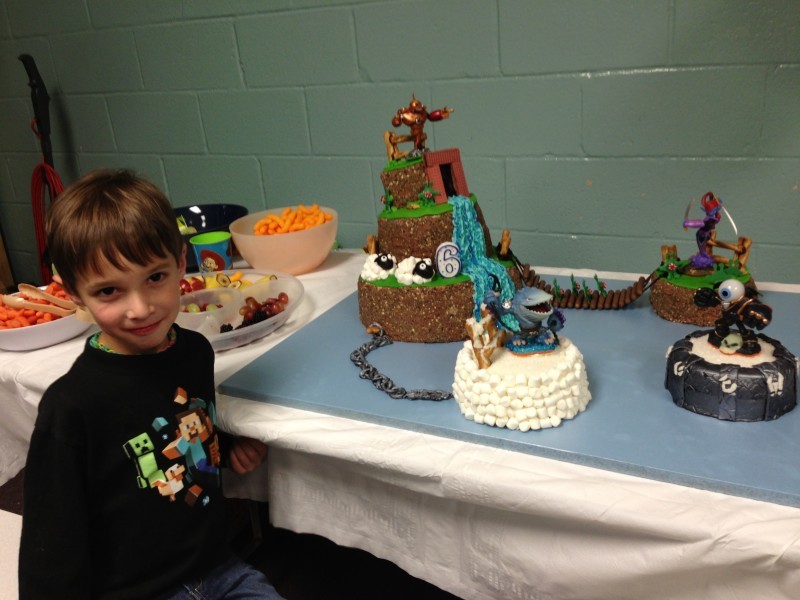