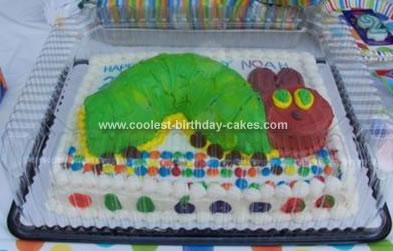 The Very Hungary Caterpillar Birthday Cake was surprisingly easy. I got the basic idea for the caterpillar from a friend of mine. First I baked a half-sheet cake for the base. We have a large family so I would definitely need the cake. For the caterpillar, I baked a single cake mix cake in a bundt pan. A few days ahead, I used gum paste to make all the goodies that the caterpillar eats in the story. I used a toothpick to put a nibble hole through each one. I allowed them to dry until they were hard.