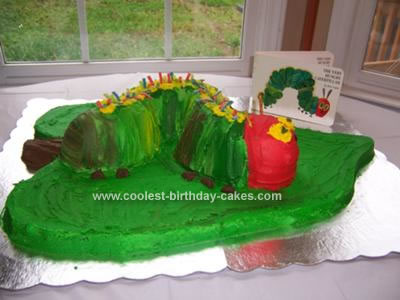 My son loves to “read” look at books and one of his favorites is the VHC. He loves all Eric Carle books, which is why I wanted to make The Very Hungry Caterpillar Cake for his first birthday party.

I do not do much baking. I am guessing this will change because I have many birthday cakes ahead. Luckily, this cake was not that difficult to make. The most time consuming part was making and mixing the colors of the icing. This cake takes a lot of icing.

I decided I wanted my caterpillar to sit on a nice green leaf (as in the book). I made 2 large sheet cakes for the large leaf; one German chocolate and one yellow (used boxed cake mixes for these). The caterpillar is a bundt cake; I made a almond pound cake (found the recipe online).

I bought 2 cake boards and taped them together on the underside. Placed the 2 sheet cakes together and carved away, creating a leaf. I frosted the leaf a nice bright green.

TIP: do not use liquid coloring, it can run, gel is best.

I cut the bundt cake in half and then cut one half again, making 3 parts (1 large and 2 smaller). The large part was the middle body section. I placed each section on the green leaf separately, turning the smaller sections to create a curved caterpillar. I used the discarded cake pieces from the leaf to make the head and “butt” of the caterpillar. I used white icing as “glue” to connect the sections and shape the head and “butt”.

I iced the entire caterpillar with the same green of the leaf to begin with. I made yellow, brown, and lighter green icing to “shade” the caterpillar attempting to get the variegated look of the caterpillar in the book. I made red icing for the head.

Final touches, yellow strip of icing on back with “spines”.

*Spines are strips of sour sugared chewy candy cut into small bits and stuck in icing (I had to use knife to push spines into cake).

I used yellow and green icing for eyes, raisin for nose, Hershey kisses cut in half for “feet” and pretzel sticks for ears.

Extra TIP – keep all cake that you cut away. You never know when you might need it.

Case in point, my cake was finished and sitting on dining room table, albeit near the edge. My beagle just could not resist, he somehow got up to the table edge and ate the tip of my leaf off (only hours before the party was to begin).

I had to cut off a large section. Just to be safe there was no doggie drool on it, but thankfully I had kept enough extra cake and icing to repair the leaf and disaster was averted!