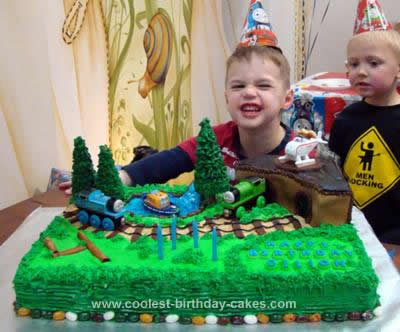 Well I wanted to do a Thomas cake but could not find the Thomas Cake Pan. So I decided to design my own Homemade Thomas The Tank Engine 4th birthday cake with the help of my husband.

Firstly, I used a rectangle cake pan and baked 2 cakes, using 2 pound cake mixes each. Next, I filled 1/2 with butter-cream icing and the other half with strawberry preserves. Then, I dug a small hole in the back for the lake.

I baked a 2 smaller 6 inch rounds then shaped them for the round house. I used the pre made fondant from Micheal’s but it was really bad and I had to go get 2 more packages because they were too greasy and sticky. Anyways I used the back for the roof and tunnels and the brown for the building.

I placed a layer of light green butter-cream icing over the entire cake and used an edger for the sides. Next, I used blue butter-cream to fill in the lake with some blue sparkly sprinkles. Then I rolled out more brown fondant and cut the wooden ties for the rail. I used graham crackers for dirt under the track. Then I placed the ties on the crackers. With a small round tip, I made the rails.

I used cinnamon sticks to shape the number 4, also to look like logs. For the tree, I used a large pretzel stick and an ice cream cone. I used white chocolate to glue the pretzel into the cone. Once dried, I used the leaf tip, starting from bottom to top to decorate the trees. I used jelly beans around the base.

I finished it off with Thomas the train, Percy, Harold, and Captain on the cake. 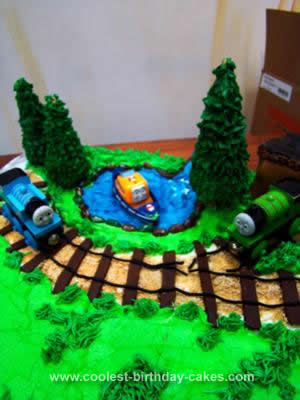 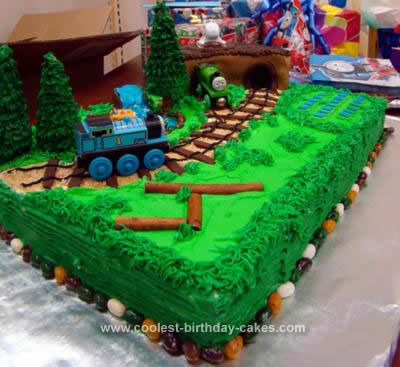