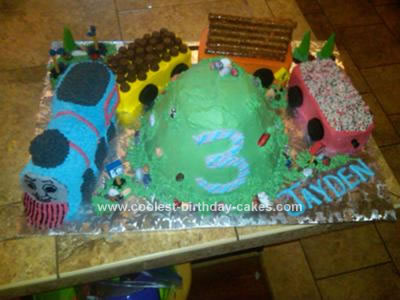 So out of all the cakes I have made, this I think was the funnest one! My friend’s son was turning 3 and loved Thomas the Train so she asked me to make a cake. I surfed the net for a long time gathering ideas and threw a bunch of things together to create this Thomas the train cake. It took me a while to put it all together and my whole family joined in on the decorating, which made it that much more fun!

I originally started off with just the train but felt like it would not be enough cake and there was so much blank room left on the cake board so I decided the best idea would be to build a hill right in the middle. I was very pleased of how it worked out, it actually consist of one 9 inch round with two 6 inch rounds on top of it and I added the whip topping frosting to shape the hill. The 9 inch cake was a white cake and the 2 small rounds were chocolate cakes, each layer had the whipped topping in between.

To give the hill more detail I placed some candy rocks sporadically and used a piping bag with a small slit in it to give it some grass, since I had lost my grass tip. But it still came out pretty good.

The hardest thing on this cake is Thomas himself. I used a train shaped cake pan and used a star tip to decorate Thomas, it was also very interesting to find a way to get the cake to stay up straight, we used several kabob sticks and stuck them through the board. Thomas was a pure chocolate cake and the his face was drawn on by hand by my husband, the artist.

We used real Thomas the Train toy accessories to fill the board, including trees, crossing signs, stop signs and lights and added more grass and candy rocks for more detail and for the final touch I added a large “3” on the side of the hill, because it was a 3rd B-Day Party and my friend’s son’s name was written on the side of the board.

I showed up to the party a little late but everyone loved the way the cake looked so much, no one wanted to cut into it. My favorite was the lemon cake with the raspberry filling…. wish I had a son of my own so I can make the cake again and try some different variations. 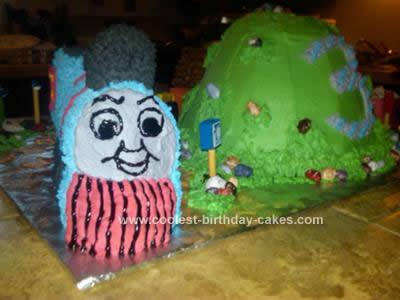 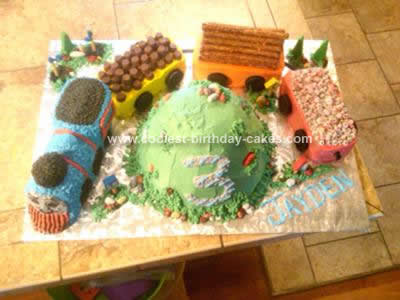 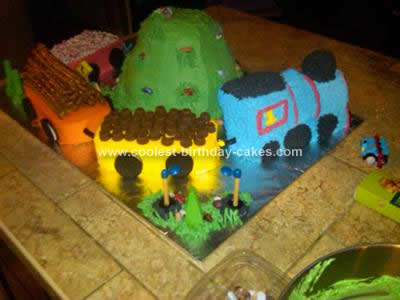