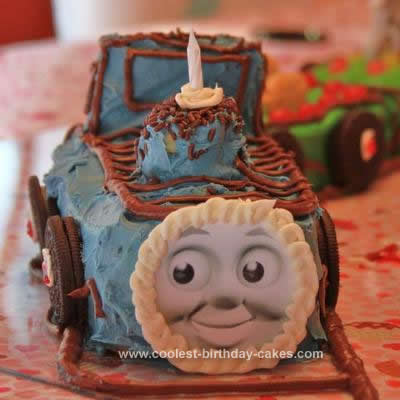 My son Joseph loves Thomas the Tank Engine, so I wanted to make him a Homemade Thomas The Train Birthday Cake Design for his 3rd birthday. I used many online pictures as inspiration! I made 4 standard cakes using loaf pans. I cooled them and then sliced off the tops to make them flat. I used the extra trimmings to build up the center of the caboose and the engine itself – to differentiate them from the train cars.

For the basic train cars, I frosted them and then filled each. One had rows of jelly beans. One had animal crackers. For the caboose, I used the extra trimmings to build up the shape and then I iced it. For the Thomas tank engine, I used extra cake trimmings to build up the shape, I iced it, and then I used chocolate sprinkles for coal and the top of the smoke stack. The only non-edible part of the whole cake is the Thomas face. I simply printed it from the computer and attached it with icing to the front of the engine. I decorated around it with white frosting and then I inserted a white candle into the smoke stack too!

All of the wheels are Oreo cookies. I used basic chocolate frosting to add details to the tank engine, cars, the caboose, and draw a basic track for the train. I assembled the entire thing on a sheet of plexi-glass (from a home repair warehouse store – very cheap) to make it easy to transport. Very easy and fun! 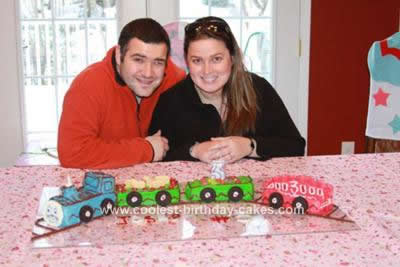 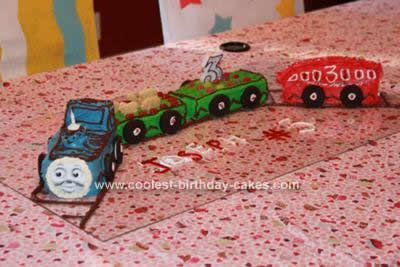 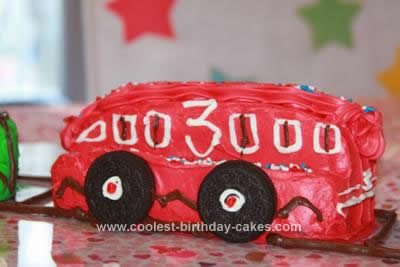