Since my son loves Thomas, I made this Homemade Thomas The Train Birthday Cake Design for his 2nd birthday. I used Wilton’s 3D train cake pan to bake a yellow cake from a box. This is a covered pan so the train impression can be on both sides, I would suggest filling the pan all the way to the brim before covering the pan with the other half. I left a little space at the top; therefore one side of my cake wasn’t completely puffed up.

Also, it is a good idea to tie the cake pan with some kitchen string (I used cotton yarn, soaked it in water first) to keep the top pan from popping off during baking. I made frosting from scratch and divided it into different containers depending on the colors that I needed for adding color. I prepared the several piping bags with the frosting (one for each color). This makes it easier to switch out the tips instead of making several bags.

I used one of the Thomas toys as a guide and added the details. I mainly used the Star tip (size 16) to make the engine with the black frosting in long lines and also the roof of the train and windows. Then I filled in red along the bottom portion with a round tip and long lines. For the body of the train I used blue frosting and again the star tip (size 18) to make stars all along the body. Again the red frosting with a small round tip (size 2) to make the lines across the top of the engine. And yellow to make the ‘1’ on the body and details for the rest of the train.

I mixed a small amount of white frosting with a drop of black coloring to make grey and used the back of my offset spatula to make the face. Once that dried a bit, I used the black frosting to make the eyebrows and smiley face and white m&ms for the eyes, then added black dots onto the m&ms.

For the train cars:

First, I baked a yellow cake from a box in a 9×13 cake pan. After completely cooling the cake, I put it into the freezer for about 2 hours so it would be hard enough to cut and frost without crumbling. I leveled the cake and I cut it in half lengthwise, and cut it into 3 parts. This gave me 3 cars (2 pieces stacked). I frosted them different colors and added chocolate covered cookies as the wheels. I added m&ms to the middle of each wheel for some detail. Then on a flat cake board, I used chocolate frosting to make train tracks, and arranged each car on the tracks.

To top of the cars, I added sugar cookie people to each one (my son & nephew have the same birthday) that I had made for the party beforehand along with a 2 for my son’s 2nd birthday. 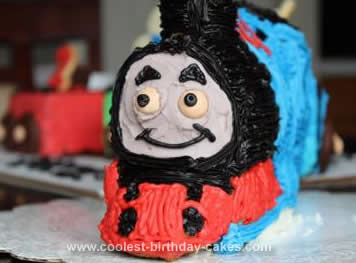