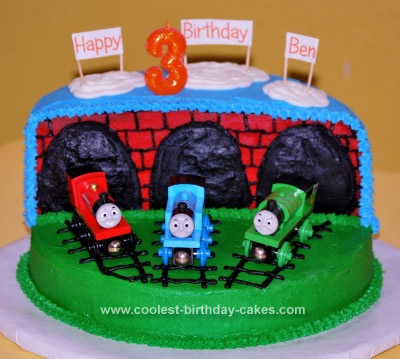 My son is obsessed with Thomas the Train, as most three year olds are. When he asked for a Thomas party I took to Google images to figure out what to do for the Thomas The Train Birthday Cake Design. My mom always made my birthday cakes and apparently it has worn off and I love to get creative and make the memory myself.

How I made my cake:

I baked two 10 inch round cakes. I used one chocolate and one white but obviously you could use whatever flavor you want. After they had cooled I shaved off the tops to make them flat on both top and bottom. I then cute one in half. Next, I started the decorating. A huge thank you to my sister for making the frosting for me as I decorated, thus allowing me to concentrate completely on the cake. But you could always make all the frosting ahead of time and then be good to go.

I covered the base that the cake was going to sit on in freezer paper. You can also use foil or buy a cake board. I started with the bottom layer and frosted the entire cake green. I used Wilton dye for my frosting colors. Next I placed one layer of the cake I cut in half on the back side of the green frosted cake with the flat side facing the center. I put a little more frosting on top of that layer just to make sure the top layer would “stick”. Then I stacked the second half of the cake on top of that which gave me the three layers and the flat side toward the front to make the sheds.

Next I assembled the shed portion on that flat front. I did cheat a little bit here and I used the Wilton icing in a tube because it’s difficult to dye frosting red and black and I didn’t need a whole lot. One tube of each was plenty. For the black “hole” I drew out the shape free hand and then placed a piece of wax paper over it. I used the black frosting with a small round tip attached to make the shape and then repeated that twice. I put those in the freezer and then after a few minutes pulled them back out to smooth it out with another piece of waxed paper on top. I then placed them back in the freezer so they could firm up really well which would allow me to “peel” them off and stick them on the cake.

While those were setting up I squeezed the red frosting from the tube into a bowl and then spread it on the flat front of the two cakes, being careful not to get too much near the green and mix it. Next I pulled the black “holes” from the freezer and peeled the waxed paper off and stuck each one on the red cake front. I used a small spatula to press them down, especially around the edges, and smooth them out. I used a tooth pick to lightly draw out the lines for the bricks and then used a very small round tip on the black tube of frosting to pipe those on.

At this point I switched to blue and frosted the entire top and back side down to the green on the first layer. I had to be very careful not to mix the blue with the red around the edges on the front. I then used a very large round tip to pipe on the three clouds on the top. Once that step was completed all I needed to do was add the train tracks. I used wooden Thomas the Train toys so I lightly set each one on the cake to leave indentions so that I would know what width to make the tracks. Using the black tube of frosting and a round tip I piped those on free hand.

My last step was to use a star tip on the green and blue areas just to clean up the edges a bit. I piped green starts around the entire base of the cake and also on the bottom front under the sheds. I then piped blue starts right about the green layer and all the way around the back to separate the blue from the green. I also piped them up around the front across the top to hide the point where the blue joined with the red. I waited until we arrived at the location for the party before adding the Thomas trains to the tracks. I printed of the “Happy Birthday Ben” and simply taped it to toothpicks to stick in the clouds.

A word of caution about the was paper – carry the cake as flat as possible. As my husband was carrying the box into the party location he had it tilted back against him a little bit and the hole cake slid on the paper. (I had the slick side facing up so that I could wipe off any icing around the edge). For this reason I don’t have any pictures of the back of the cake. Once I got it sat down I had to use a spreader to push the whole cake back into place so that the green stars on the front were actually touching the cake again. Luckily, the back of the cake didn’t show! It was a huge hit at the party and I had a great time making it. It wasn’t nearly as difficult as I thought it was going to be.