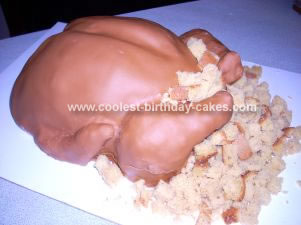 My son’s 11th birthday was on Thanksgiving and he requested a turkey cake, one that looked like it was cooked and we could put it on the table and fool everyone into thinking it was real!

I used 2 boxed banana cake mixes and baked them one at a time in an 8 cup glass mixing bowl. The flat side of the cakes were joined by icing to form a large oval (oval was trimmed to make a flat spot so cake could lay on its side). I looked at photos of cooked turkeys and proceeded to trim the cake to shape, using scrap cake to build up as needed.

Drumsticks were make of Rice Krispie Treats and wooden skewers held drumsticks to body of turkey. The cake was frosted with a crumb icing and then brown fondant covered the whole thing.

My daughter used scrap banana cake cut into cubes to make the stuffing! The birthday boy got his wish; grandma thought it was real! This was my 1st cake sculpture. Since then I’ve made a Pikachu cake for my daughter’s 17th birthday and a two-headed turtle cake for my son’s 12th birthday, as well as a bachlorette party cake. Next is an oppossum cake! Have fun!