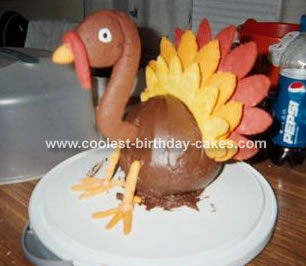 My husband’s birthday is on November 22. He told me that all of his life, though he didn’t know why, he had wanted his birthday cake to be a turkey cake, and the closest anybody had ever gotten to it was a regular iced cake with a little plastic turkey on it. He said that after seeing all of these other cakes that I had made, he’s my husband so it’s only fair that he get a real turkey cake where the cake itself is in the shape of a turkey.

Of course I was going to make him whatever kind of cake he wanted. So for his birthday in 2005 he got his turkey cake, only it was a flat cake that I had to cut out, free hand, in the shape of a turkey because we had just had a new baby and I had to stop working so we didn’t have money to buy cake pans with.

In 2007, it just happened to fall on Thanksgiving so for this year, he wanted another birthday cake shaped like a turkey, but with a different icing pattern than the first one. I wanted to make the cake that he wanted, but at the same time I wanted to make him a surprise cake.

After thinking about it for a few days, it occurred to me that he would never think about having a standing up cake so it was decided. Then I wondered, “How do you make a turkey cake stand up?” The body wouldn’t be hard, but the head, neck, and feathers would be.

I thought about it for a day or two and couldn’t come up with anything. Then, I asked a friend of mine, who also decorates cakes, if she had any ideas. She suggested using gum paste or cookies. As it turned out, she was also getting ready to make a standing up turkey cake for Thanksgiving, and using gum paste for the head, neck, and feathers. I’m not very experienced with gum paste, so I decided to stick with using cookies.

When I finally made the cake, I was running out of time, so instead of cutting out individual feathers using leaf cookie cutters, I decided to just cut out one big cookie in each color. After they cooled, I attached 2-3 sucker sticks onto the backs of each feather cookie and inserted them into the cake. The cake itself is a regular pound cake baked in a baseball cake mold, with chocolate icing. For the turkey head and feet, I just rolled out the cookie dough into snakes and shaped it how I wanted it. However, I don’t recommend this. The feet were okay, but the head was too heavy and fell over as soon as I inserted it into the cake and let go. It would probably be better to roll the cookie dough flat and cut it out.

My husband loved the cake. I was a little mad that with all the time it took me to make it, the whole cake was gone within ten minutes between only six people, but then I thought, “Well, at least I know it was good.”